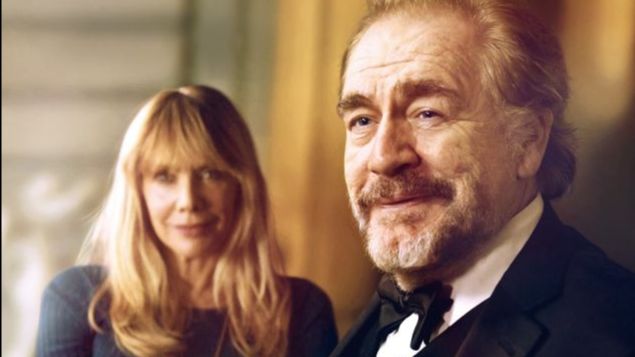 Some lessons about life never change: do what you love, surrounded by people you love, before it’s too late. That’s a simple but reassuring series of messages that are the through line for the sometimes satisfying but fundamentally patronizing The Etruscan Smile, director Oded Binnun and Mihal Brezis’s adaptation of the bestselling 1985 novel La Sonrisa Etrusca.

The film itself is a sort of meta example of the universality of these messages, a production from Israeli filmmakers that alters author José Luis Sampedro’s narrative about a Spanish family into a tale about a Scottish man estranged from his son. The nationalities and locations of the original novel and film adaptation might be different, but the culture clashes about careers, parenting, and ways of life are similar. There’s a lot of recognizability in The Etruscan Smile, both in its broad narrative of a stubborn old patriarch realizing the importance of family and in its specific execution of this concept, which is to hammer home that every young person making a choice for themselves is doing it wrong.

The Etruscan Smile so unwaveringly sticks to the idea that the old ways are the right ways that it doesn’t actually allow for its protagonist to grow, despite its insistence otherwise. Yet we’re so accustomed to this formula in film that the story is nevertheless reassuring, especially because Brian Cox is so excellent at walking the line between gruffly toxic and warmly authoritative. It’s easy to overlook the film’s conservative messaging not just because of how the film softens his character’s edges, but also because of how in tune his performance is to that transformation.

The Etruscan Smile begins in the isolated Scottish island of Hebridean, where 74-year-old Rory MacNeil (Cox) has a very particular routine. He wakes up every morning and steps outside, barefoot, into the plush moss growing outside of his simple wooden home. He walks naked into the sea, directly into the oncoming waves. Nights are spent in the local pub, where he scoffs at selfie-taking tourists and engages in a decades-long feud with village rival Campbell (Clive Russell). The men have hated each other for years, but their disagreement is in its final days. Campbell is dying of liver failure, and although Rory won’t admit it, a cocktail of drugs he has self-prescribed isn’t helping his own mysterious illness. He’s grown weaker and sicker in recent years, and although he hates to admit it, he needs help.
Where to turn? Although it pains Rory, he reaches out to his estranged son, Ian (JJ Feild), with whom he hasn’t spoken in 15 years. After receiving a scholarship to study chemistry at Berkeley and leaving the island, Ian has never come back, and father and son barely recognize each other. And Rory is so out of step with his son’s life that he forgot he had a grandchild, Jamie (Oliver Aero Kappow Epps and Elliot Echo Boom Epps), or that Jamie was a boy, not a girl.

In fact, everything in Ian’s San Francisco life is confusing to Rory: His palatial 19th-floor apartment; the fact that Ian’s wife Emily (Thora Birch) is clearly the dominant force in the marriage; that Emily and Ian entrust a Spanish-speaking nanny with Jamie; that Ian is using his chemistry degree to pursue a culinary career; that the family receives a fair amount of financial support from Emily’s entitled, judgmental father Weiss (Tim Matheson). In his rugged, brusque way, Rory lets them all know how he feels, and in the process becomes incredibly close to Jamie. Although Rory is undeniably ill, maybe Jamie will give him a reason to get better.

The Etruscan Smile then moves forward in the exact way you would expect, with Rory beginning to regret his distant relationship with his son and attempting to make amends. But the script from Michael McGowan, Michal Lali Kagan, and Sarah Bellwood falls into the tiring rhythm of making nearly every choice of Rory’s the right choice, and every other person’s decision making inferior. Ian is portrayed as foolish for trusting Weiss instead of his own father. We’re meant to judge Emily as a bad mother because she misses her son’s first words. The Spanish-speaking nanny is presented as a nag who tries to disrupt the relationship between grandfather and grandson. Even Rory’s love interest, the accomplished Claudia (Rosanna Arquette), comes around to find him charming after his opening line is disparaging other women for their “fake tits.” Rory is often a brute, but the movie forgives that all because he is being authentically himself. But at the cost of every other character?

The Etruscan Smile gives us the ending we want, with a family brought together despite all odds and characters choosing to live their truths. There is comfort in that conclusion, but if you think about The Etruscan Smile too deeply, the film’s primary argument that younger generations are inherently inferior to their elders in nearly every way, from how they dress to how they work, might not sit quite as well.