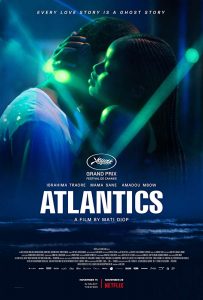 The film, which takes place in a Senegalese beach town near Dakar, centers on Ada (Mame Bineta Sane), a 17-year-old girl who’s in love with construction worker Souleiman (Traore) but engaged to marry the slick, wealthy Omar (Babacar Sylla). When Souleiman and his fellow workers — who haven’t been paid in months for their work on a massive new building — drop out of touch after abruptly leaving town to seek a better life, Ada moves ahead with her wedding. But then a mysterious fire breaks out at Omar’s that same night, and her friends start suffering an unexplained fever — and Ada starts to realize that something strange is going on.

The fire attracts the attention of the police, particularly Detective Issa (Amadou Mbow), who’s convinced that a jealous Souleiman has reappeared on the scene and is responsible for the blaze. But Issa’s own unpredictable health defies explanation, and he discovers that he can’t use logic and investigative skills to solve this particular case.

Running underneath all of the plot developments is the thread of Ada’s uncertainty about her choices and her future. Can she give up love to ensure wealth and stability? What does she really want out of life, and will she be able to speak up for herself? Ultimately, Atlantics is the story of a young woman coming into her own and finding her footing in a world full of challenges. Working under Diop’s able direction, Sane makes that story compelling and her character both vulnerable and determined. “Atlantics” doesn’t go where you think it will, and that’s always refreshing. — Betsy Bozdech

Marina Antunes Nothing I’ve seen over the last few years looks quite like Mati Diop’s Atlantics, which frames the story of a woman’s struggle for self-discovery in Senegal. Ada is a headstrong young woman promised to the son of a prominent businessman, but her heart belongs to Souleiman, a construction worker dealing with his own troubles, namely the fact that he and his co-workers haven’t been paid in months. The two stories come together in an unexpected way when Souleiman and some of his coworkers leave by sea in search of a better life and Ada is left behind to deal with a broken heart, a marriage to a man she doesn’t love, and a group of friends who begin acting strangely. Equal parts a story of self-discovery, self-determination and mystery, Atlantics beautifully tells a story that is universally relatable while interlacing it with social and cultural values that are not commonly seen in mainstream filmmaking. Mame Sane delivers a star-making performance in a movie that is completely mesmerizing from the opening scene. Not one to be missed.

Leslie Combemale Beautifully dressed in the finery of a love story, where visceral feelings and a pervasively languid visual language wash over you like warm summer waves, Atlantics entrances its audience while giving voice to issues of economic disparity, gender inequality, and the destructive nature of colonialism. Writer/director Mati Diop was the first woman of color to have a film in competition at Cannes, and her film won the Grand Prix, proving female filmmakers are not only worthy of inclusion at that festival, but worthy of awards. Diop chooses to show rather than tell the complicated story of young people’s place in Senegalese society, using a ghost story and possession to talk about the yearning that takes hold of the youth in her native country. Thousands of people leave every year, possessed of a need to become more than what they believe their own country can allow for them. They attempt to traverse an ocean in hopes of a better life, only to disappear. This haunting story of a woman who loses her lover to the ocean, and the supernatural way in which he reappears, will take up longterm residence in your psyche. That it does so with such panache suggests this first feature is only the beginning for Mati Diop. Read Mati Diop interview.

MaryAnn Johanson I love how Mati Diop keeps us in suspense for a while about just what sort of movie her Atlantics is going to be. It starts out as if it’ll be a social-justice drama, and then perhaps a romance, then it morphs briefly in a mystery, and finally it reveals itself as fantasy horror… and what’s more, of a particularly feminist bent. The lives of women as an array of bad options, as if there are no good choices available, only compromises that minimize one kind of trauma and deprivation or another. Diop’s is an astonishingly original vision, and a much needed new voice.

Pam Grady: The sea is beautiful and mysterious and it holds many secrets, as Ada (Mama Bineta Sane), a young woman in Dakar, Senegal, who loves one man but is betrothed to another discovers in actor-turned-writer-director Mati Diop’s gorgeous and eerie first feature. Souleiman (Traore), the one she loves, faces a life at a dead end; his boss has stopped paying his workers’ wages and Ada is about to marry wealthy Omar (Babacar Sylla). So, he boards a boat for Spain with other migrants, disappearing from Ada’s life as if he had never been there—until an incident on her wedding night followed by a series of mysterious text messages. Is Souleiman back? The answer to that question is not so simple in a drama that is a detective story, a supernatural thriller, a deeply felt romance, and a feminist tale of Ada’s insistence on self-determination in a society that would deny her agency. Not that Diop is dogmatic with that last bit of business; instead, it arises out of Ada’s pushback to her family, husband, and police and in her forthright rejection of security when material comfort would come at the cost of her sense of self. Claire Mathon’s resplendent cinematography, an almost tactile sound design, and Fatima Al Qadiri’s resonant score are among Atlantics’ pleasures. The winner of the Grand Prize of the Jury at the Cannes Film Festival, Diop’s triumphant debut augurs a stunning career to come.

Sheila Roberts Mati Diop’s highly original film is a magical and mysterious tale told from the female-centric perspective of those left behind. It’s filled with ghostly apparitions that capture both the plight of the migrant crisis and the life altering impact of genuine love. Ada’s dreams, nightmares and memories are central to her African identity. They are omens that remind her of who she is, what she can become, and how the future belongs to her. Read full review.

Loren King What a stunning, original, visually striking feature debut from Mati Diop. Senegal’s entry for Best International Film Oscar consideration,Atlantics made history and generated wide interest when it won the Grand Prix at Cannes. Not just that, but Diop, who is of African and French heritage, became the first black woman to direct a film featured in the Festival’s Competition section. Read full review.

Marilyn Ferdinand: For her first feature film, French-Senegalese director Mati Diop has created a mystical, atmospheric love story set in Dakar, on the Atlantic coast of Senegal. The timeless, rolling ocean that figures prominently in this beautifully shot film mirrors the vast, restless love Ada (Mame Bineta Sane) and Souleiman (Traore) feel for each other. But when Souleiman and his coworkers are cheated out of four months’ wages, they feel they have no choice but to try strike out across the ocean to seek a better life. Their fate and the fate of the women they left behind remain intertwined across time and space, with explosive results. The mythic dimensions that I find so satisfying in African films are used to great effect in Atlantics. This film’s a knockout.

Jennifer Merin Mati Diop’s remarkable first narrative feature, Atlantics, heralds the arrival of a brilliant talent on the international filmmaking scene. Beautifully crafted and visually stunning, the film morphs genres into it’s own unique blend of love story, mystery, horror thriller and social justice drama. The story of a young woman torn between following her heart to true love and obeying the dictates of her class-conscious family is set within the context of the harsh exploitation of Senegalese workers in Dakar and their efforts to escape exploitation  The love story at the film’s core reveals the depth of the struggle for a better life, all leading to profound and affecting contemplation about class-related injustice in Senegal. Atlantics won the Jury Grand Prize at Cannes this year and is Senegal’s official entry for the Oscars’ Best International Film. Do not miss it!!!

Nell Minow: Atlantics is cinematically poetic, trusting the audience to adjust to its gentle rhythms, an assured first narrative feature with a setting that we have not seen before and a story that we can all connect to.

Cate Marquis First-time director Mati Diop’s Atlantics is a tale of star-crossed lovers mixed with the supernatural and social commentary, set in the Atlantic coastal city of Dakar, Senegal. Winner of the Grand Prix award at Cannes, Atlantics touches on issues of women’s rights, economic inequality and the migration crisis, in its tale of a young construction worker and a young woman who has been promised to a wealthy man she does not love by her traditional Muslim parents. The construction workers are building a gleaming high-rise tower but have not been paid for months, although the boss lives in luxury, Frustrated, they decide to take their chances in a small boat, hoping to reach the coast of Spain. Almost immediately, strange things begin to happen, and the tale morphs into detective tale with a supernatural twist. This surprising, affecting tale grips the audience with its storytelling while highlighting timely issues.