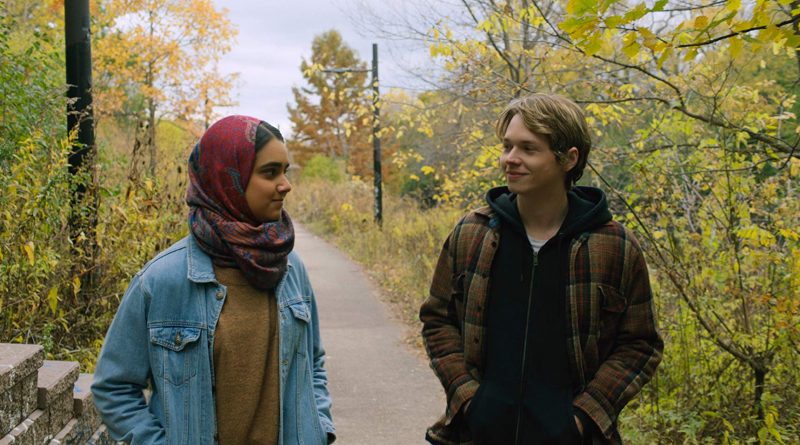 Coming of age is an angst-filled journey of self-discovery for any teenager, but in Apple’s new indie drama, Hala, it’s especially daunting for a sensitive, curious 17-year-old first generation Pakistani American (Geraldine Viswanathan) who finds herself navigating uncharted waters. Hala struggles to forge her young adult identity while confronting the challenges of dual cultures and trying to meet her parents’ (Purbi Joshi, Azad Khan) rigid expectations. Her desire to integrate as a young American girl conflicts with her family’s traditional cultural and religious values. Often, she feels like an outsider in high school.

Hala is a talented writer and her poignant essays and poetry inspire her English teacher (Gabriel Luna) to encourage her to consider a career in that field. Her father (Azad Khan) admires her appreciation of great literature and her ability to solve difficult crossword puzzles. Her love of skateboarding, however, is considered rebellious by her Mother (Purbi Joshi). When she dares to spend time alone with a young classmate (Jack Kilmer) she’s fallen in love with, her parents ask her to end the relationship. Once Hala realizes her father is having an affair, she struggles to keep the heartbreaking secret to herself. When her family invites another Pakistani-American couple and their son over for dinner, Hala quickly realizes the motive behind it and decides then and there to escape the fate of an arranged marriage. She is determined to set her own course for her future and one that allows her to remain true to herself.

Filmmaker Minhal Baig delivers a highly personal and engaging film that’s sensitively written and directed and empathetic to all the characters. Viswanathan, who gave a breakout performance in 2018’s Blockers, has impressive range and her delivery is captivating. She gives a moving performance as a quietly powerful Muslim girl who is slowly evolving into an adventurous young woman, exploring her own sexuality, testing established boundaries, and stubbornly refusing to relinquish her freedom. The demise of her parents’ marriage proves to be as much a life-altering experience for her as it is for them. Joshi and Khan’s nuanced acting makes their break-up feel authentic and convincing.

Hala’s executive producer, Jada Pinkett Smith, is proudly proactive about inclusivity, diversity, and having women lead the charge in front of and behind the camera. It’s noteworthy that every department head and a significant number of the production crew on this film are women. The production values are uniformly excellent thanks to the contributions of DP Carolina Costa, production designer Sue Tebbutt, costume designer Emma Potter, editor Saela Davis, composer Mandy Hoffman, and casting director Avy Kaufman, among others. Hala is a fantastic film that you should not miss. It was an official selection of 2019’s Sundance Film Festival, Toronto International Film Festival, and LA’s AFI Fest.