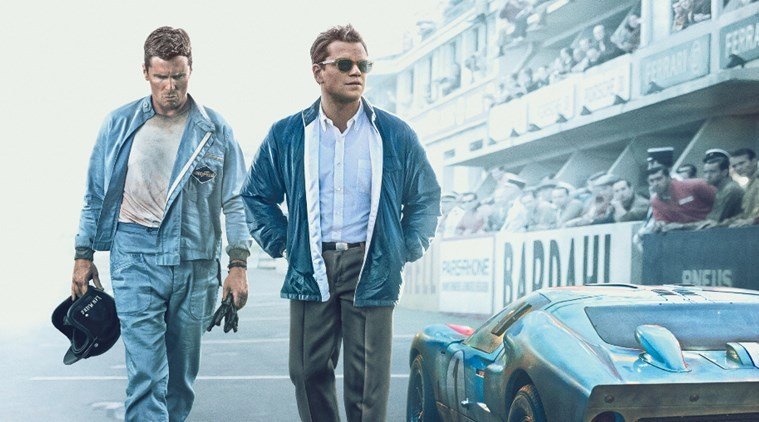 According to Ernest Hemingway, “There are only three sports: bullfighting, motor racing and mountaineering; the rest are merely games. These are the only sports where lives are put on the line.”

So this saga begins as Carroll Shelby (Matt Damon) is on the last leg of the 1959 Le Mans when, suddenly, both his car and he catch fire. After a quick fix, he’s back on the track, becoming the first American to win Le Mans. But that will be Carroll Shelby’s last race.

Sidelined by his cardiologist, Shelby turned to designing cars. Which put him on the radar of Henry Ford II (Tracy Letts) who realized that, as the Baby Boomer generation came of age, their purchasing habits were changing. They wanted cars that were sportier, sexier and faster.

So Ford tried to buy Enzo Ferrari’s fabled Italian racecar company. But, at the last minute, Ferrari sold to Fiat, not only refusing Ford’s monetary offer but also insulting Ford himself.

Infuriated, Ford decided to build a sports car that would win the 24 Hours of Le Mans, the oldest auto endurance race. Carroll Shelby was the man to do it and British engineering specialist Ken Miles (Christian Bale) was the man to drive it – with unctuous Leo Beebe (Josh Lucas) as Ford’s toady.

Those are the facts. Screenwriters John-Henry Butterworth, Jez Butterworth and Jason Keller, working with director James Mangold, embellish them, creating a three-act structure that illuminates the heartfelt Shelby/Miles friendship, Miles’ devotion to his wife (Caitriona Balfe) and son (Noah Jupe), along with spectacular action set-pieces.

As the drivers rev their engines, it’s almost like a Western gun-fight with kudos to cinematographer Phedon Papamichael and stunt coordinator Robert Nagle.

On the Granger Movie Gauge of 1 to 10, “Ford vs Ferrari” is an exciting 8 – hitting on all cylinders.