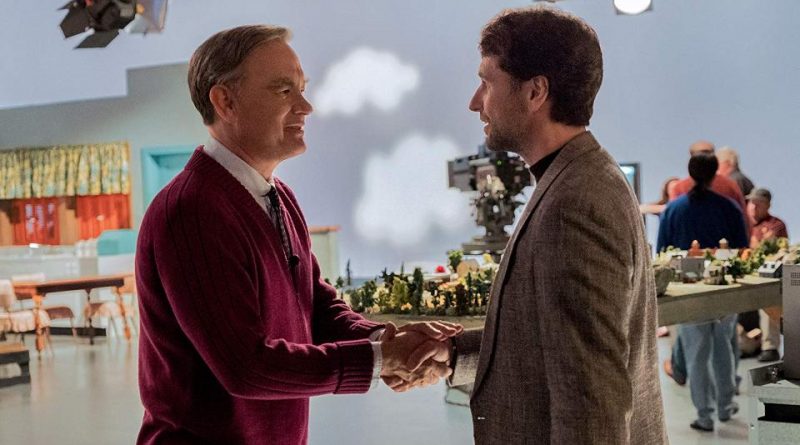 Tom Hanks as Fred Rogers? Yep, it works—it works so well you’ll start shaking your head in utter wonderment as Tom Hanks has channeled Fred Rogers—his mannerisms, his quiet demeanor, his uncanny listening abilities, his deep curiosity into people’s lives, and his perceptive insight into a person’s soul. The film is not intended for preschool children, this is not about Daniel Tiger’s Neighborhood, or Lady Aberlin talking about her sad feelings to King Friday XIII— the film is based on a true story of a journalist Tom Junod’s (Matthew Rhys), 1998 Esquire article he penned on heroes, namely—Fred Rogers. Junod had no idea of the degree that Fred Rodgers would profoundly change his life. Not only did Rogers help him to work through his feelings of anger toward his estranged father, but he also gained a lifelong mentor and friend. As a film, we view one hour and 59 minutes of absorbing performances by both Hanks and Rhys as the angry, negative journalist who is taken under the caring, gentle wing of an ordained Presbyterian minister disguised in a red cardigan sweater.

I treasure the film’s opening as Hanks appears on the Mr. Rogers neighborhood set, and the minute he swings open that iconic front door—then changes into his cozy red cardigan and blue tennis shoes while singing the archetypal ‘Beautiful Day’ song, an immense, warm feeling washes over you—like a comfy fuzzy blanket. From the get-go, we are in the hands of a kind, compassionate man who cares not only for the well-being of children, he cares for all ages. He lived his life in continual care of the emotional welfare of others. Tom Junod is a lucky man indeed, as unbeknownst to him, he hit the jackpot when he met Fred Rogers.

Glaring in the opening scene are the colors red, white and blue—the red sweater, the blue shoes, and white shirt, the American symbolism hits immediately, this person is our American hero, who not only taught our children, he taught the world to be kind, caring and loving people. The creative scriptwriters, Micah Fitzerman-Blue & Noah Harpster, and director Marielle Heller’s present the story in a clever way—using the props and format of the Mr. Rogers Neighborhood. The episode we view is centered on a writer with an anger problem, with “Picture Picture” showing us the story of Roger’s friend Tom Junod’s troubles. Calmly, Hanks states, “Forgiveness releases feelings of anger.”

The film progresses from Junod’s initial Mr. Roger’s Neighborhood introduction through their meeting and interview. At its core, the story is a synthesis of Fred Roger’s as a human being, his values, his belief system and his commitment to humanity to love one another for who they are, not who they may become. His interception with Tom Junod serves as a springboard into the inner workings of Fred Rogers, while it’s true he sought to help others, he also didn’t like the spotlight turned toward himself. It’s incredible how we view Roger’s manipulation in turning the tables on the interviewer. Myself I’ve conducted hundreds of interviews throughout my fourteen-year film career, and I can tell you, the majority of the people are open to talking about themselves. Fred Rogers turned the interview toward Junod, as I believe not only did he not want to talk about himself as a hero, he sensed from Junod’s hard-line journalism pieces and contemptuous reputation that he had issues that needed to be dealt. In placing the writer on his back foot, Rhys becomes somewhat unglued. Here’s where his performance becomes magnificent during the tender scenes with his wife, played beautifully by Susan Kelechi Watson. She teases him in the beginning, although she’s earnestly pleading saying, “Please don’t ruin my childhood,” as she’s skeptical due to her husband’s past articles that have ruined careers.

A scene that may bring tears occurs in a subway when a crowd of riders sings the “Beautiful Day” song to Fred Rogers. Look for his real wife Joanne Rogers as an extra in the restaurant scene and former “Mr. Roger’s Neighborhood” staff. I have such praise for director Marielle Heller as she’s incorporated the heart of Fred Rogers while providing us with an empathic behind the scene glimpse of the man as a human being. His struggles were enormous, over-coming bullying, obesity, and loneliness at a young age, not to mention the tremendous burden he placed upon himself to teach the world compassion through children.

Tom Hanks and Matthew Rhys should be nominated for Academy Awards for their outstanding performances, and the intuitive director Marielle Heller should also be nominated. Look for them at awards time. My suggestion is to allow yourself the pleasure to see what you may have overlooked while you were either raising your families, or viewing yourself as a child—as you’ll be enlightened and proud of an American hero we can claim as our own.

*lloyd Vogel is the fictional name of journalist Tom Junod.

**Writers disclosure: I have a degree in Early Childhood Education, and studied many of the same Child Psychology courses as Fred Rogers. He’s my hero, and now through this film, the world will know him as well. During my elementary school teaching years, at ‘Parent Orientation’ I would tell my parents in a serious tone, “Your child’s social and emotional development is just as important to me as their academic development,” in my twenty plus years of teaching gifted children, a few parents were surprised by this declaration. To this day, I strongly believe this more than ever given today’s social climate.

The Bottom-line: The film is perfect for all ages, just leave the youngsters at home, as it’s the adults’ turn to learn from Mr. Rogers.