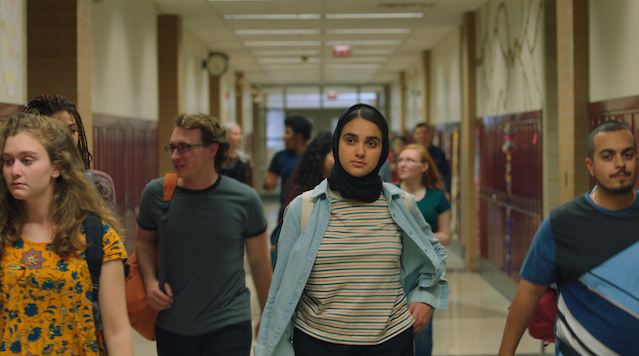 Writer-director Minhal Baig’s feature debut is anchored by a heroine unique enough to catch attention and complex and engaging enough to hold it. Hala (Geraldine Viswanathan) is a 17-year-old high senior in the Chicago suburbs going through the usual coming of age tribulations: there’s college, sex, love, identity and breaking away from strict parental control. But as a Pakistani American Muslim who wears her hijab while skateboarding and appreciates literature such as Ibsen’s “A Doll’s House” with a clear and understated eloquence, Hala is a character we’ve rarely seen on screen.

The specificity and sensitivity with which Baig crafts Hala’s fairly ordinary story gives this modest coming of age film some real heft. There are familiar sensitive-teen struggles — Baig apparently based the story on her own experiences — such as Hala reading her heartfelt compositions aloud in class to the encouragement of a kind teacher (“Blinded By the Light” had a similar moment). Like that film, Hala is an immigrant and culture clash story, with Hala understanding her parents’ old ways and their sacrifices as much as she needs to rebel from them, clashing with her parents who expect her to say her morning prayers and marry “a nice Muslim boy.” But the film is so honest and low key that delivers these scene with a refreshing simplicity. It helps that Viswanathan is a performer of both strength and delicacy; this is one of the most realistic depictions of a smart, perceptive 17-year-old girl grappling with sexual awakening to come along in a while.
Despite her parents’ well-meaning plans for her, Hala develops a relationship with fellow skateboarder Jesse (Jack Kilmer). Their discussions about poetry and their eventual, inevitable sexual encounter are tender and powerful thanks to Baig’s realistic rendering. The script is sometimes predictable, but the film delivers a universal story because it is so culturally and emotionally specific. Hala is a lovely, important and unforgettable character that it makes one eager to hear more from Baig.