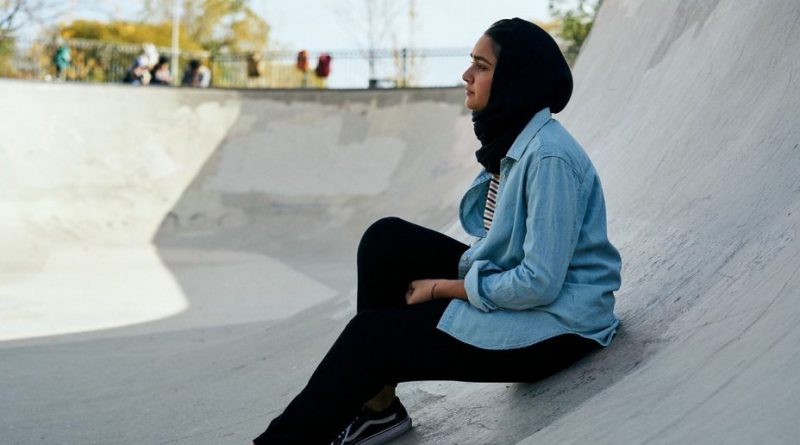 Just like romcoms, coming-of-age dramas often feel so familiar that it’s easy to be tempted to write them all off as trite or predictable. And then along comes a smart, engaging film like “Hala,” which brings fresh energy to the whole genre simply by reminding us how many diverse coming-of-age stories we haven’t yet heard. 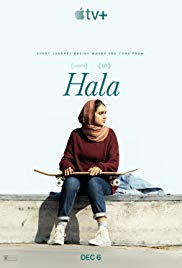 In many ways, Hala (Geraldine Viswanathan, in a powerful, heartfelt performance) is a typical Chicagoland teen: She skateboards, she laughs with her friends, she’s passionate about expressing herself, and she’s nursing a crush on a cute classmate (Jack Kilmer). But in other ways, she feels very much outside the mainstream. Her Muslim faith and conservative family traditions mean that she always wears a hijab and modest clothes to school — and that her parents fully expect her to avoid all boys until she’s ready to marry a nice young Muslim man.

As she realizes how much she longs to experience life on her own terms, Hala bristles at her parents’ rules and expectations — especially when her home life takes an unexpected turn and everything seems to come crashing down at once. Wrestling with emotions and desires she doesn’t know how to handle, Hala acts out, rebelling against everything that’s holding her back, consequences be damned.

It’s not the first time a movie teen has had to deal with messy relationships and complicated emotions, and it won’t be the last; indeed, Hala’s very relatability is one of the things that makes writer/director Minhal Baig’s second feature film so appealing. But by centering such a familiar story on a girl who’s very different from most of the teens Hollywood gives us, “Hala” underlines the importance of representation, of mirrors and windows in the media we consume. And that’s not something you see every day. — Betsy Bozdech

Marilyn Ferdinand: High school senior Hala Masood (Geraldine Viswanathan), a budding writer, is studying Henrik Ibsen’s A Doll’s House in English class. The question of whether Nora, who has been lying to her doting husband, should have left him comes up in class. Hala believes that a person cannot be divided against herself, that the line between the inner and outer selves must be dissolved for a person to live an authentic life. But is an authentic life what we all should strive for? Hala finds the complexity of adulthood extraordinarily painful as her seemingly idyllic family life starts to spin apart. Minhal Baig, the screenwriter and director of Hala, has created a portrait of a Pakistani family living in Chicago that is no different from most families harboring secrets and outmoded attitudes. Most of the characters and situations are fairly routine, but the compulsively watchable Viswanathan, who is in every scene, proves herself more than capable of carrying the film’s point of view. I was pleased to see in the closing credits that the film is inclusion-clause certified, a designation I hope to see on more films.

Leslie Combemale Apple TV snapped up writer/director Minhal Baig’s coming of age drama Hala, and with good reason. It was first screened at this year’s Sundance, where it was nominated for the Grand Jury Prize, and the new streaming service bought the worldwide rights nearly immediately. The film examines the experience of a Muslim teen from an immigrant family named Hala, (Geraldine Viswanathan) who strains to find her own identity. At home, she is expected to follow Pakistani tradition and Muslim law, even as one of her own parents is breaking rules of morality. She believes there must be a different way of approaching her own life with integrity, as a young woman who is both American and Muslim. She finds solace with fellow skateboarder and poet Jesse (Jack Kilmer, yes, son of Val) but reconciling her desire for him and her loyalty to family proves challenging. The lyrical way the film is shot, and the truthful performance by Viswanathan make Hala, which shines a light on one young woman from a population whose personal experiences are rarely represented onscreen, deeply moving. Even when we don’t like Hala’s choices, we appreciate being able to see a character like her make them.

MaryAnn Johanson Oh my goodness, what an absolutely stunning film. Minhal Baig’s coming-of-age drama is beautiful and wise. The parameters of its confused young protagonist’s life may be very specific — the immigrant parents, the strict religious expectations, the conservative mindset — but Hala’s story is so wonderfully universal, too, in that achingly familiar way of all teens, as we try to find ourselves while attempting to honor our families and our upbringings at the same time. Geraldine Viswanathan had already proven herself a total treasure with *Blockers,* but as Hala, she is simply divine. A perfect film, and there aren’t many of those.

Loren King Writer-director Minhal Baig’s feature debut is anchored by a heroine unique enough to catch attention and complex and engaging enough to hold it. Hala (Geraldine Viswanathan) is a 17-year-old high senior in the Chicago suburbs going through the usual coming of age tribulations: there’s college, sex, love, identity and breaking away from strict parental control. But as a Pakistani American Muslim who wears her hijab while skateboarding and appreciates literature such as Ibsen’s “A Doll’s House” with a clear and understated eloquence, Hala is a character we’ve rarely seen on screen. Read full review.

Jennifer Merin Minhal Bain’s first feature is a wonderfully wise, exquisitely sensitive and beautifully crafted coming of age drama about a Muslim American teenage girl who is trying figure out who she is, what she wants And how to fit in while trying to do the right thing. Hala is the must see debut of a superbly talented and accomplished new director.

Sheila Roberts Coming of age is an angst-filled journey of self-discovery for any teenager, but in Apple’s new indie drama, Hala, it’s especially daunting for a sensitive, curious 17-year-old first generation Pakistani American (Geraldine Viswanathan) who finds herself navigating uncharted waters. Hala struggles to forge her young adult identity while confronting the challenges of dual cultures and trying to meet her parents’ (Purbi Joshi, Azad Khan) rigid expectations. Her desire to integrate as a young American girl conflicts with her family’s traditional cultural and religious values. Hala is a fantastic film that you should not miss. Read full review.

Marina Antunes Minhal Baig’s Hala can’t be pigeonholed as one thing. More than an immigrant story, it’s also a tale of self-discovery, and family all rolled into one. Baig’s observations of immigrant life are painfully authentic; she captures both the big ideas of traditional versus progressive values, but also small details like the use of language in many immigrant families. Even more poignant is the sincerity with which Baig approaches Hala’s, brilliantly portrayed by Geraldine Viswanathan, realization that she doesn’t really know her parents and the sometimes painful realization that our parents are human and make mistakes, just as we do. Hala is a beautiful and powerful film.

Cate Marquis Geraldine Viswanathan (BLOCKERS) stars as a Pakistani-American high school senior in Minhal Baig’s coming-of-age drama HALA. Viswanathan shows she can handle drama as well as she did comedy in BLOCKERS, playing Hala, a girl who like all teens is trying to find her direction in life, but with the added challenge of being caught between her traditional Muslim immigrant parents’ world and the American one she lives in. Hala is a mix of contradictions, wearing a headscarf and dressing modestly at school but missing morning prayers at home and skateboarding to school. Hala seems closer to her father (Azad Khan), who dotingly tolerates her American ways and small rebellions more than does her more traditional mother (Purbi Joshi). But the situation with her parents shifts when Hala develops a crush on a non-Muslim boy (Jack Kilmer) and Hala discovers cracks in her parents marriage. There are some parallels to LADYBIRD in director Baig’s tale but with a particular immigrant twist in a story takes off in unexpected, intriguing directions.