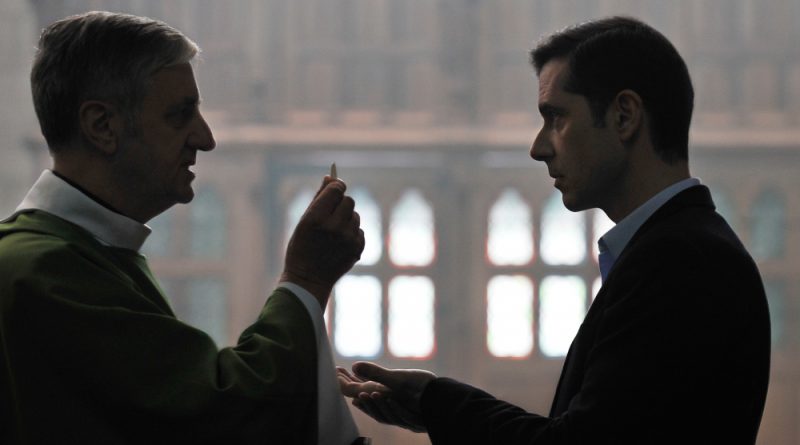 By the Grace of God breaks the silence.

Pedophilia depends on silence. By the Grace of God breaks that silence by telling the story of three men who were sexually abused as children by a priest in the Roman Catholic church in France. That priest was protected by a cardinal. Those three victims bared the truth — as does this excellent film.

Alexandre, Francois, and Emmanuel have been friends since boyhood, but not one has spoken to the other about being raped by the same priest, one Bernard Preynat. That is, until Alexandre spots that very priest still consorting with children in the name of the church. He tells his wife. He tells his children. He tells the cardinal.

Not only that, but he also tells his friends and encourages them to work with him to bring justice to victims. However, the law limits the years that can pass before it’s too late to prosecute. All three of these men have lived with the life-whipping trauma before and beyond that deadline. They make the effort to find other victims, hoping to find one who is young enough to accuse Father Preynat.

By the Grace of God is a very different film from Spotlight, which traced journalists’ exposing the pedophilia in the Roman Catholic church in Boston. By the Grace of God comes from victims’ lenses. Writer/director François Ozon begins with Alexandre, then seamlessly interdigitates another victim so that each tells his story as it relates to his trauma and within his family. Ozon tells their stories in believable flashbacks of a camp and a photo lab where the priest preyed on the boys. He has one correct a cardinal who conflates homosexuality with pedophilia. The men also address Christian forgiveness in their cases. They stay or leave the church, and they come up with a better word than “pedophilia.”

By the Grace of God is based on true stories of rapes, betrayals, cover-ups, resistance, and, finally, this year, of the conviction of Cardinal Philippe Barbarin of Lyon of concealing the conduct of Bernard Preynat. The film is so good that it’s hard to tell whether it’s a documentary or a feature film. By the Grace of God matters — no matter what.