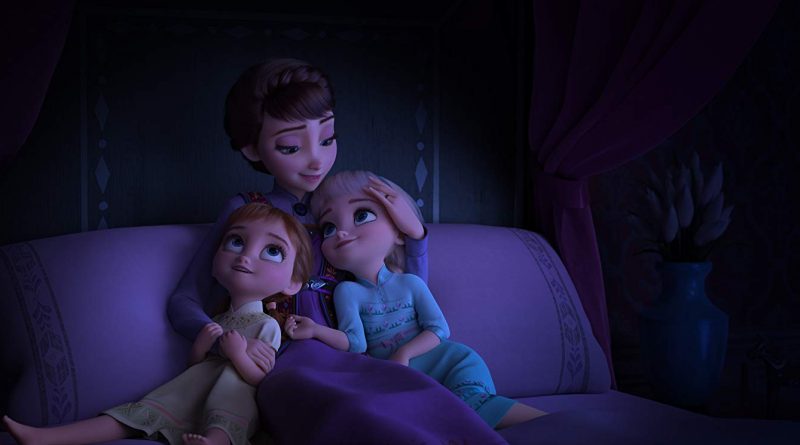 As Disney’s animated tale of the two devoted sisters continues, Queen Elsa (voiced by Idina Menzel) is haunted by an ethereal siren song that seems to beckon her into an enchanted forest as supernatural forces rattle her kingdom of Arendelle.

So, accompanied by her spunky younger sister Anna (voiced by Kristen Bell), the snowman Olaf (voiced by Josh Gad), lovelorn Kristoff (voiced by Jonathan Groff) and Sven the reindeer, they venture forth, prompting the new song “Into the Unknown.”

Their journey will lead them into secrets of their mystical past, where – in a river full of memory – they discover they truth about their grandfather’s abuse of indigenous people and the cruelty of colonialism.

Based on a story by Chris Buck, Marc E. Smith, Kristen Anderson-Lopez and Robert Lopez – which traces its antecedents to Hans Christian Andersen’s “The Snow Queen” – it’s written by Jennifer Lee, who did the first installment, and co-directs with Chris Buck, once aging focusing on Anna and Elsa as self-reliant, resilient role-models for young girls.

While the songs by Kristen Anderson-Lopez and Robert Lopez don’t have the clout of “Let It Go,” how could they? “Let It Go” has become Disney’s biggest song of all time, garnering an Oscar, Golden Globe, Grammy, etc. This time, the songs are just pleasantly melodic with lyrics reflecting emotions that propel the sisters’ quest.

The artistic animation highlight occurs when Anna tries to run across the ocean, transforming it into shards of ice, descends underwater, and eventually winds up astride a magnificent sea horse.

And, yes, there’s a post-credit sequence, delivering three alternate versions on some of the songs and Olaf’s reiteration of his “water has memory” theme.

On the Granger Movie Gauge of 1 to 10, “Frozen II” is a dazzling 7, as the lucrative franchise continues.