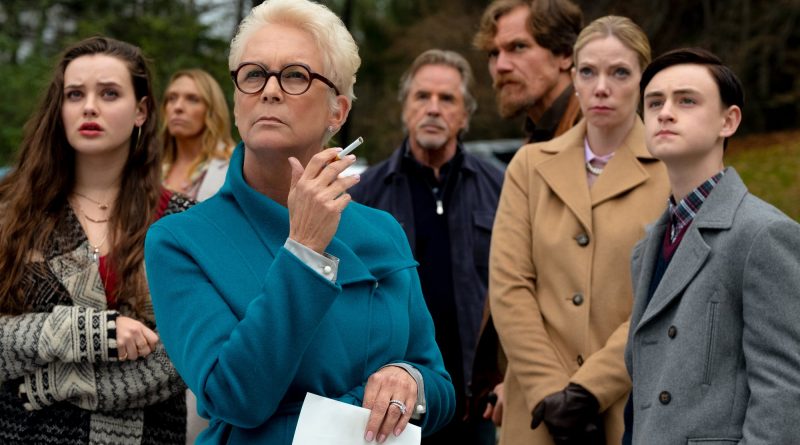 After his polarizing blockbuster trip into space with “Star Wars: The Last Jedi,” writer-director Rian Johnson turns back to the stylish mysteries of his excellent crime dramas “Looper” and “Brick” with the hilarious whodunit “Knives Out.”

His deliciously tart Thanksgiving treat mixes the twisty puzzles of Agatha Christie’s books, the sharp-edged humor of Mike Nichols’ films and Johnson’s own audacious storytelling style, which involves subtly seasoning the story with timely commentary on family affairs, class strife and immigration policy. Even better, he has an all-star cast eager to veritably feast on the scenery of his cinematic game of “Clue.”

The night after wealthy crime novelist Harlan Thrombey’s (Christopher Plummer) complicated, combative family gathers for his 85th birthday party at his rambling mansion, the writer is found dead of an apparent suicide. Lt. Elliot (Lakeith Stanfield), the mild-mannered police detective in charge, and Trooper Wagner (Noah Segan), a Thrombey fan boy also on the case, are joined in the investigation by Benoit Blanc (Daniel Craig), a renowned private detective whose observations are as quick as his Southern drawl is slow.

Blanc suspects foul play, and potential suspects abound: Harlan’s daughter Linda (Jamie Lee Curtis) is an ambitious real estate mogul whose allegedly supportive husband, Richard (Don Johnson) is having an affair; his son Walt (Michael Shannon) is the milquetoast head of Harlan’s publishing company who chafed at the restrictions his father put on licensing his books; his widowed daughter-in-law Joni (Toni Collette) is a flighty lifestyle guru who has a canny way of secreting away the support he provides in memory of his late son; his favorite grandson, Ransom (Chris Evans), is a spoiled, selfish playboy and spendthrift; and his other grandson, Jacob (Jaeden Martell) is a right-wing internet troll.

As he painstakingly pieces together the events of that fateful night, Blanc increasingly relies on the testimony of Harlan’s Harlan’s nurse and close friend Marta (Ana de Armas), who has a peculiar psychological disorder: attempting to lie induces her to vomit.

“Knives Out” is an enticing addition to Johnson’s filmography and a welcome appetizer before he goes back into orbit for more “Star Wars” adventures.