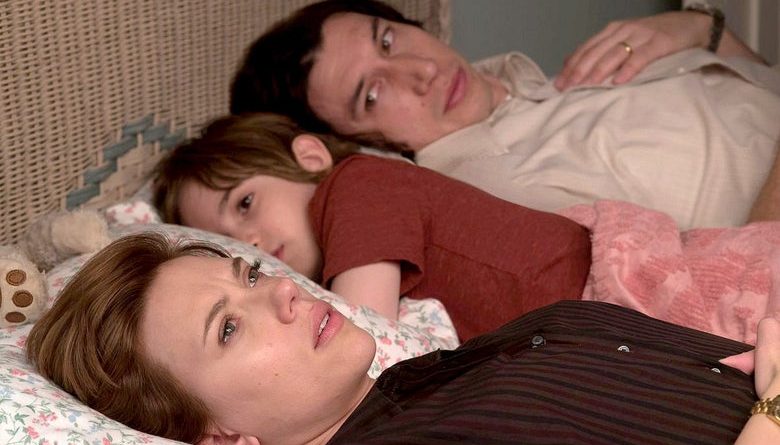 You know the feeling when you have a very painful scab on your knee and you keep picking at it? That’s what writer/director Noah Baumbach has created in this bitter, corrosive tale about the dissolution of a marriage.

Beginning as ‘cinema verite,’ recalling the 1960s French film movement which featured natural actions and authentic dialogue, it inexplicably then morphs into near-farce and melodic metaphors.

As their story unfolds, Nicole (Scarlett Johansson) and Charlie (Adam Driver) recall what they adore about each other. She’s fun, playful and a superb dancer. He’s tidy, great with their son and cries at movies. But their marriage is about to dissolve and even a mediator can’t keep their discourse civil.

Charlie’s a dedicated Brooklyn theater director and, for years, Nicole has been his leading lady. But now she’s been offered a TV series, filming in Los Angeles, where her family lives. So Nicole takes their eight year-old son, Henry (Azhy Robertson), and moves back to where she grew up, enjoying the proximity to her mother (Julie Hagerty) and sister ((Merritt Wever).

Supposedly, this is based on the emotional baggage of Noah Baumbach’s 2010 contentious divorce from Jennifer Jason Leigh, but that’s no excuse for the exhausting,seemingly endless bickering between these privileged, affluent protagonists.

What’s admirable are the gutsy, no-holds-barred performances. Scarlett Johansson is devastating as the unfulfilled actress who’s tired of playing a subsidiary, supporting role, while Adam Driver oozes confusion and pain as the reality of their bicoastal dilemma slowly dawns on him.

FYI: Previous splitsville sagas include “Kramer vs. Kramer,” “Shoot the Moon” and “War of the Roses.”

On the Granger Movie Gauge of 1 to 10, “Marriage Story” is an incisive 7. It’s a deep, painful dive into divorce.