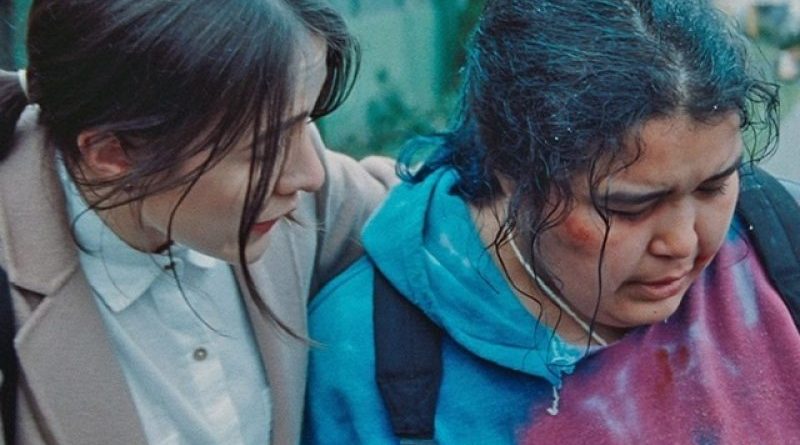 This deliberately paced, remarkable first feature from Elle-Máijá Tailfeathers who co-directed and co-wrote the film with Kathleen Hepburn, centers on two very different indigenous young women, Áila (played by Tailfeathers) and Rosie (Violet Nelson) in East Vancouver, British Columbia. They meet by chance on the street and, by the end of their journey, may likely never meet again. The story is raw and real and, if one sticks with it, rewarding.

When Áila encounters the disheveled, injured, very pregnant Rosie who’s fled her abusive boyfriend in the pouring rain, Áila takes the younger woman to her nearby apartment and gives her dry clothes. Áila gently tries to persuade Rosie to seek shelter at a safe house. But Rosie says little and rebuffs the help, reacting with a surly resentment.

Slowly, there is a hint of defenses cracking and Rosie agrees to go. It’s in the cab over the short distance to the safe house that Rosie says the most she says throughout the movie: she pretends to the driver that Áila is her older sister, agreeing with him that they look nothing alike, and that Áila’s the one heading for rehab for a drinking problem. Áila plays along, and in those few minutes of chatter we sense a lifetime of pain, resentment, fantasy and the fleeting possibility of hope.

The outcome of that short journey isn’t a surprise. It’s grounded in a sad reality about abuse that the film never shies away from. But their trip and back also holds the promise for change for both Áila and Rosie, though this film is too wise and understated to reveal more. That’s its power.