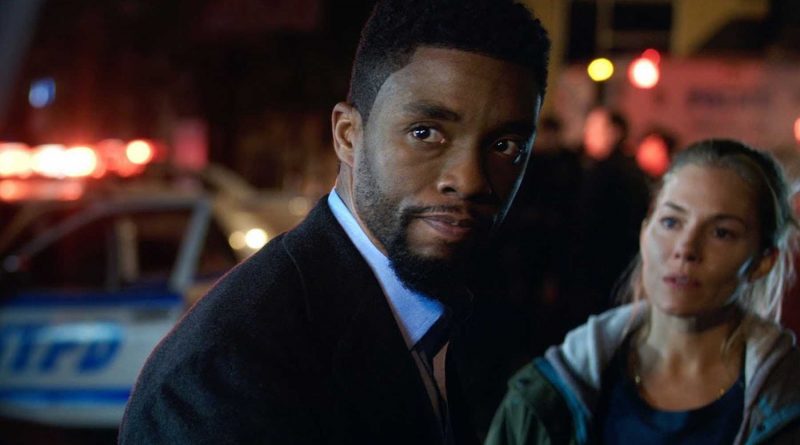 There’s potential buried deep inside this violent crime-thriller that follows the NYPD hunting down two masked criminals who left eight police officers for dead in a drug heist gone wrong but, unfortunately, it never surfaces.

After grabbing bags of cocaine and committing those murders, Michael (Stephan James) and his older partner Ray (Taylor Kitsch), two Iraq veterans, go on the run.

“There are 21 bridges in and out of Manhattan. Shut ‘em down!” is the Mayor’s order, so that’s just what Homicide Detective Andre Davis (Chadwick Boseman) and his unit do.

When Davis was a teenager, his heroic police-officer father was killed by a junkie in the line of duty. As a result, uncompromising Davis has become so trigger-happy that Internal Affairs has opened an investigation into his behavior.

As the long night progresses, it turns out that, instead of 30 kilos of cocaine, the culprits have 300 kilos – and lots of corrupt cops are involved.

Meanwhile, the Big Apple is in chaos. Commuter trains and subways stop and tunnels are blocked as the manhunt progresses, computer-monitored by the Local Mobile Station Identity Unit. (This is all described via TV news, rather than being shown on-screen.)

Based on a generic story by Adam Mervis, it’s shallowly scripted with clichéd dialogue by Mervis and Matthew Michael Carnahan and heavy-handedly helmed by veteran TV director Brian Kirk (“Game of Thrones”), making his feature-film debut and focusing on mind-numbing gun fights and car chases.

FYI: It was actually filmed in Philadelphia.