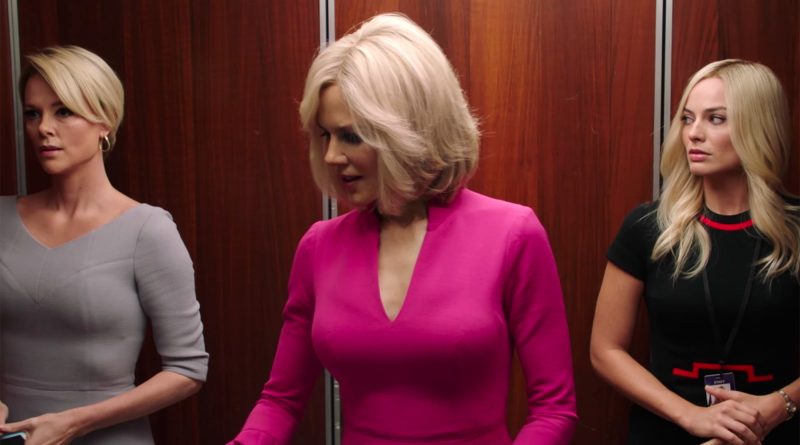 The more distance I get from seeing Bombshell, the more mad the movie makes me. The film, which soft-tackles the story in which former CEO of Fox News Roger Ailes finds his downfall through sexual harassment claims from the most prominent female (oft-seen) on-air personalities at the studio, is certainly a decidedly good news/bad news affair. The good news is that clearly Charlize Theron can act her way out of any situation and in any circumstance. If that were a skill needed in the apocalypse, in that eventuality, she’d be the queen of the world. More good news is that we can all consider the film as a whole a ‘teaching moment’. That brings us to the bad news. Bombshell is representative of nearly every bad aspect of white feminism.

Director Jay Roach and screenwriter Charles Randolph bring us the unfolding of sexual harassment allegations brought by Fox News on-air personalities Megyn Kelly (Charlize Theron) and Gretchen Carlson (Nicole Kidman) against Ailes, as well as the fallout to both women as a result of their speaking up. It’s certainly true that Trump supporters can as easily fall victim to abuse, and their voices deserve as much to be heard. That being said, the representation of the leads as icons of the #MeToo movement, and the story as one of empowerment, leaves any of us with a memory, or awareness of how Kelly and Carlson carried themselves while at Fox, with a bad taste in our mouths. Would portraying them as they really are make them too unlikeable to be ‘heroines’ of the story?

Who is this movie for, exactly? Is it for white women who feel perfectly satisfied when they see these blonde, white gals bring a (truly heinous) serial sexual predator down, knowing that sexual harassment effects women of color disproportionately around the world, and Kelly and Carlson are part of the race and class politics that perpetuate those statistics? Carlson is a known advocate against gay and trans rights, as well as someone who spread the rumors of Barack Obama as Muslim. Beyond saying blackface is fine on Halloween, Kelly has been known to spout consistently racist talk, like when she called Michelle Obama “Obama’s Baby Mama” or declared both Jesus and Santa as Caucasian. The point here is the film only relates the sexism as it is seen against white women, and the characters expressed onscreen do not tell the whole story of how damaging Carlson and Kelly have been and are with their racist, homophobic views. They may have stood up to Ailes, but neither are heroes to those who celebrate diversity and inclusion. Even the one queer character Kayla Pospisil (Margot Robbie) is white, and has a relationship with a white lesbian working at Fox who keeps both her liberal beliefs and gayness in the closet, but she’d never be able to do that if she were a woman of color. It’s certainly convenient she can hide aspects of herself to get ahead, and turn a blind eye to all those Fox hurts with their anti-LGBTQ, anti-immigrant, anti-POC propaganda. Their storyline is peak white feminism.

I’m all for a marketplace that offers a diversity of perspectives. I also applaud the bravery of these women standing up in the face of harassment, knowing it might cost them their careers. The way Bombshell leaves viewers, however, suggests that Ailes’ ouster left a softer, safer Fox News in his wake. That part of the film is a bit of what Fox excels in: fake news. How would you like to be a member of one of the communities these women have consistently insulted, only to see them lionized? Watch the film for Theron’s spot-on portrayal. Let the rest go.