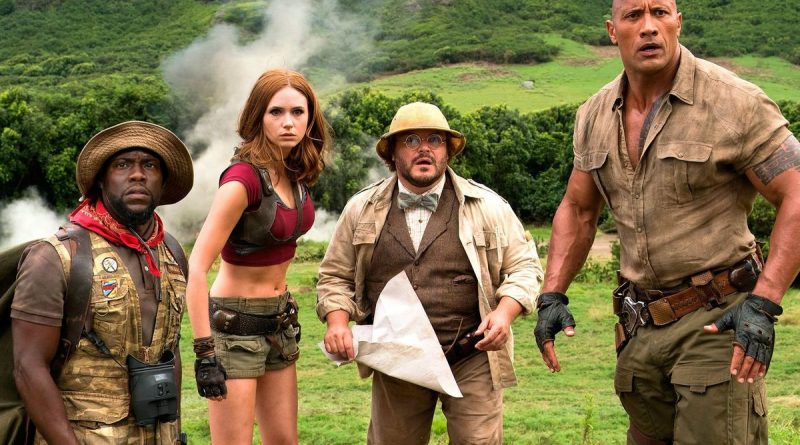 Jake Kasdan strikes gold again with this continuation of the family-friendly fantasy he introduced in Jumanji: Welcome to the Jungle (2017), in which four teenagers get sucked into playing a mysterious video game in which they ‘become’ intrepid explorers.

It’s now a year later, and Spencer (Alex Wolff) is coming home from college in New York to visit his family and friends over winter break. Feeling anxious and awkward, he once again turns to the magical game, hoping to assume to confident persona of Dr. Smoulder Bravestone (Dwayne ‘The Rock’ Johnson).

They’re all searching for Spencer. Plus, there’s the pickpocket, Ming Fleetfoot (Awkwafina), who figures prominently, since the only way they all can escape Jumanji’s challenge this time is to recover a gem from the barbaric tyrant, Jurgen the Brutal (Rory McCann).

Does the inventive plot by Jeff Pinkner, Scott Rosenberg and director Jake Kasdan sound confusing? It is, at times, but it’s also great fun watching these actors playing against type and trying to imitate one another. And, yes, Colin Hanks and Nick Jonas reprise their previous roles in cameos.

Plus there’s lots of FX action, including an attack by hundreds of angry, fast-running ostriches and an escape on spinning, suspended rope bridges while they’re being pursued by ferocious mandrills.

On the Granger Movie Gauge of 1 to 20, Jumanji: The Next Level is a perilous, body-swapping 7 – and stay through the credits