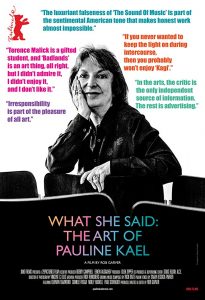 Mixing many excerpts from Kael’s own writing (read by Sarah Jessica Parker) with vintage footage, personal artifacts, and interviews with friends, family members, and Hollywood luminaries like Quentin Tarantino, Alec Baldwin, and more, Garver tells Kael’s story with passion and care. Her incisive prose elicits both knowing laughter and indignation, depending on whether you agree with her take on a particular movie. Her struggles to make a decent living as a single mother, even after she became the most well-known critic in the United States, spark both outrage and sympathy. (It would be nice to say that things were different now, but…alas.)

The movie makes it abundantly clear that Kael (who died in 2001) wasn’t interested in catering to public opinion; she never pulled any punches — she wouldn’t have dreamed of it. It also firmly establishes her powerful love of the movies, the magic of sitting in a dark theater and being transported somewhere else for two hours, and her desire to talk to the world about cinema in a way that they could understand and relate to.

Very few film critics have ever risen to the “brand name” recognition that Kael achieved in her career, and with the proliferation of sources and publications available today, it seems unlikely that it could happen that way again. But anyone who’s ever written about film — or anything they’re passionate about — will find What She Said an excellent reminder of the power of owning your opinions and never apologizing for loving or hating a piece of art. — Betsy Bozdech

Nikki Baughan: There’s never been a film critic quite like Pauline Kael, and this excellent documentary gets right to the heart of what made her such a singular voice. Filmmaker Rob Garver concentrates largely on her work and why it became so influential, while filling in some of the background of her life. There’s the usual blend of illuminating talking head interviews with family (including Kael’s only daughter), friends, colleagues and industry luminaries, and plenty of archive footage with Kael herself. Cleverly, though, Garver – who also works as editor here – has artfully stitched these together with clips from the full spectrum of movies, which serve not only to underscore the beats of Kael’s life and work, but also her enduring passion for cinema in all its forms. This is no sycophantic, fawning profile; there are plenty of interviews with those who fell foul of Kael’s often acerbic criticism, and those who didn’t care for her work. Yet the admiration and respect she commanded reverberates throughout; and her achievements in an industry largely dominated by men are made particularly clear. The film, like its incomparable subject is inspiring, insightful and hugely entertaining.

Susan Wloszczyna: There are snippets of Kael’s own voice in archival footage although first-time director Rob Garver fills in the blanks by employing actress Sarah Jessica Parker to read sections of her writing while the critic’s daughter Gina James and other associates provide commentary. Kael, who had a way of picking just the right searing or celebratory word, rattled the intellectual crowd while pooh-poohing the backers of critic Andrew Sarris’s auteur theory. Read full review.

Leslie Combemale Pauline Kael famously said that critics need only do two things consistently. We must always work to be better at our craft, and we must always be courageous. Whether you love or hate her work, this is a great reminder to anyone, regardless of what part of the business world they are in, from a woman who proved an important part of film history. Read full review.

MaryAnn Johanson I’m not sure there has been a more appropriate film so far to be AWFJ’s Movie of the Week. In a time — right now — when women film critics are fighting to be heard and to be taken seriously, here is a reminder that perhaps the most famous film critic ever was a woman who revolutionized the field and had a huge impact on Hollywood. This brilliant film — as objective as Kael was proudly (and in my mind, correctly) subjective — pulls no punches on Kael’s complicated and sometimes contradictory life and work but rightly hails her as a trailblazer and an outlier in a field that was, then as now, dominated by men. Depressingly, however, this doc is also a reminder that all feminist triumphs are forgotten, have to be relitigated, and then are rediscovered in a never-ending cycle. I wonder how many young film fans — and perhaps some not quite so young — have never even heard of Kael before… and how many of them right now would insist that film criticism is a man’s game that women ought not to intrude upon. Hopefully some of them will see this and be chastised. Read full review.

Nell Minow: Between sense and sensibility, New Yorker critic Pauline Kael would always choose the latter. She engaged with film like The Revenant‘s Leonardo DiCaprio engaged with the bear, as though she and the film were trying to rip each other apart. But she also engaged with it like DiCaprio and a horse in that film, ripping it open to huddle inside for warmth. Her work was refreshing in refusing to find a distinction between high and low art. She was equally refreshing, if sometimes frustrating, in refusing to make any effort at consistency or applying a standard set of criteria. This documentary explores her influences and her influence, her strengths and weaknesses, and, most of all, how much has changed since public intellectuals like Kael appeared on talk shows instead of reality stars.

Sandie Angulo Chen: What She Said: The Art of Pauline Kael is a clear-eyed and layered look at one of the most influential film critics in American history, the late New Yorker critic Pauline Kael. Through archived and contemporary interviews with filmmakers, friends, fellow critics, actors, and her only child Gina James, Rob Garver’s documentary provides a comprehensive chronicle of what made Kael tick, what kinds of films she liked best, and how the critic managed to champion not only an entire generation of directors, from Scorsese and Altman to De Palma and Coppola, but also a generation of younger critics. Unlike many biographical documentaries, this one doesn’t stick to only positive soundbites and aggrandizing material. Kael’s flaws and negative idiosyncrasies – even her casual cruelty – are also addressed. In an age when anyone with a computer and a love of movies can be a film critic, it’s important to be reminded of someone who changed film criticism forever, who strove to connect with but never pander to readers, and who believed in watching movies with a personal and not an academically detached eye.

Loren King Pauline Kael, who wrote about film for The New Yorker, was one of the few high profile women critics in the 60s and early 70s and is credited with inventing modern film criticism with her colloquial, smart but non-academic approach. This entertaining documentary, essential for cinephiles and anyone who writes about film, traces Kael’s career as she struggled for years to eke out a living as a critic while raising her daughter, Gina James (interviewed in the film) on her own, a most unconventional undertaking in the late ‘40s. Real full review.

Jennifer Merin Pauline Kael then, now and forever. First time documentarian Rob Garver gives us a comprehensive chronicle of the legendary film critic while capturing her point of view and the strongly expressed opinions that established her influence on movies, especially during the 1960s and 70s, when she championed the upcoming Martin Scorsese, Robert Altman, and Francis Ford Coppola, among others, and collected a coterie of young critics whose style was very much influenced by her own. Garver uses archival clips of Kael and on camera commentaries from her daughter, as well as friends, colleagues and detractors. along with clips from the films she critiqued. In our day and age of instant internet blather about movies, Garver’s entertaining profile of Pauline Kael is a must see for anyone who loves the movies and wants to be a better, smarter movie watcher.

Sheila Roberts Rob Garver’s documentary deftly captures Pauline Kael’s lifelong love and passionate celebration of cinema. The film is entertaining and engaging as it navigates pivotal moments in Kael’s prominent career — from writing her essay on Raising Kane in which she argues Herman Mankiewicz’s substantial contributions to the authorship of Citizen Kane, to her short-lived collaboration with Warren Beatty that brought her to Hollywood after Bonnie and Clyde. Read full review.

Marina Antunes Pauline Kael was a trailblazer, a lover of cinema, a great critic, and a great writer. Her words elevated a picture and, as Rob Garver notes in his documentary What She Said: The Art of Pauline Kael, reading her work was often like watching a film for the second time from a different perspective. Featuring interviews with friends, family and colleagues, as well as excerpts from her various works, the film provides a wonderful introduction to Kael and her work.

Cate Marquis “Funny and lethal,” is how one commentator describes the legendary Pauline Kael, the long time film critic at the New Yorker, in the documentary WHAT SHE SAID: THE ART OF PAULINE KAEL. Whether you agreed with her or not, she was always entertaining to read. In this excellent, exhaustive documentary, you get a sense of who Pauline Kael was and how she changed both film criticism and movies themselves. This wonderful warts-and-all documentary explores the career and work of Kael, a ground-breaker who elbowed her well-written way into film criticism when it was a gentleman’s club, although she was neither of those things. Like Dorothy Parker, Kale did not spare in her verbal lashings but she could also lavish praise. With her ability to spotlight new emerging cinematic talent, she became as much a cultural force as a film critic.A variety of filmmakers and fellow critics appear in this worthy documentary. Curiously, the one thing it is short on are examples of her writing but it does not matter, as it does so much to intrigue the viewer about who she was, that they may likely to seek out her barbed, beautiful babbles themselves.

Title: What She Said: The Art of Pauline Kael