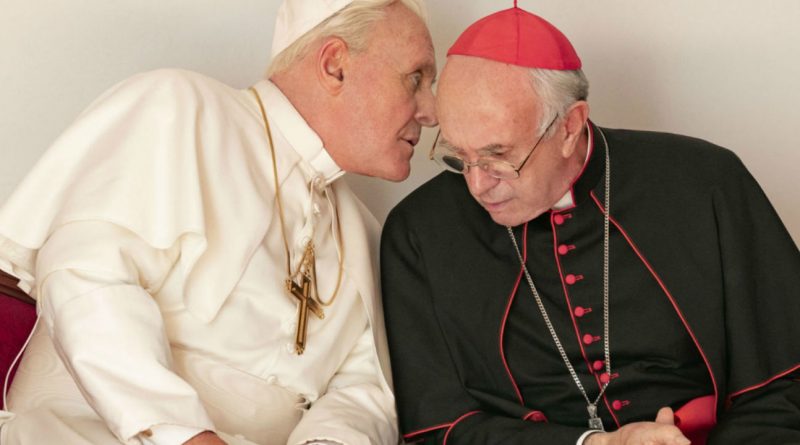 At the heart of director Fernando Meirelles’ The Two Popes lies the debate between the better course forward for the Roman Catholic Church, in particular, and any esteemed alliance, in general. Which choice—tradition or reform—offers the best path: adhering to values affirmed over centuries or incorporating beliefs and principles that keep modern followers committed to the institution.

Author of Darkest Hour, Anthony McCarten provides a remarkable, immensely pleasurable script that cares about language. Benedict and Francis deliberate compromise vs. change, regrets and forgiveness, acceptance of our own humanity and believing in the mercy that they preach. The performances by Anthony Hopkins as Benedict and Jonathan Pryce as Francis accentuate the depth of their concerns.

Metaphors comment unobtrusively on a variety of current issues: building bridges not walls, income inequality, tyranny, modest vs. indulgent life styles. These important topics are punctuated with nice touches of humor and music. The Two Popes speaks to everyone who examines, as honestly as possible, the decisions of their lives, whether Muslim, Jewish, Hindu, Catholic, Protestant, agnostic, atheist, or anything else. Streaming on Netflix beginning December 20.