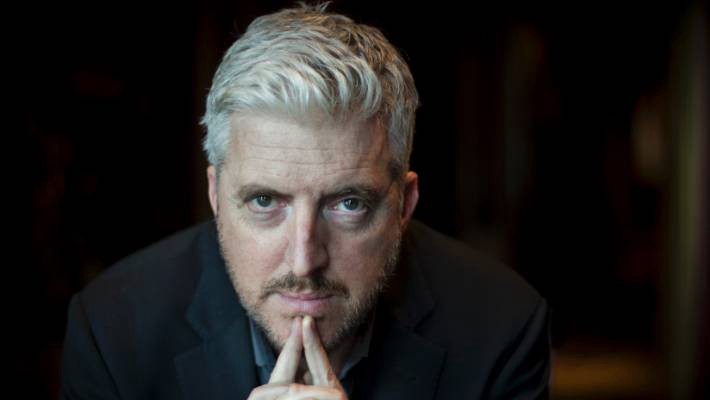 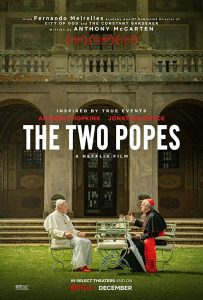 Sometimes history is made by groups of people in labs or courtrooms or legislative bodies or battlefields. Sometimes history is made by two people talking to each other quietly. We hear those stories less often. It may be that what makes those changes possible is keeping them secret. Perhaps that is what makes imagining them so irresistible. That is what screenwriter Anthony McCarten has done in fact-based films like Bohemian Rhapsody, The Darkest Hour, and his latest, The Two Popes.

For the first time in nearly 700 years, a pope (Sir Anthony Hopkins as the more conservative Pope Benedict) resigned instead of serving until death. That made it possible for him to play an unprecedented role in encouraging and supporting the choice of his successor, Pope Francis (Jonathan Pryce as the first pope from the Americas).

In an interview, McCarten talked about what “great directing” by Fernando Meirelles added to the film, and why this is his “most adventurous” film.

Nell Minow: The movie is tremendously cinematic, especially for a film that is two people talking to each other for much of it. Did you bring a lot of visual ideas to the film?

Anthony McCarten: I tried to, yes. I mean, the writer was the first director because there’s a misconception that screenwriting is just writing the dialogue and directors come up with everything else. But of course you design character, sometimes costumes, too. In your writing you work out how to get them into a room, how to get them out of the room, the decision about what kind of room. So, many of these things are the first part of presenting the visual roadmap. But then, you need directors and actors who take those ideas and open them out and find whole new worlds inside the ones who first imagined. And that certainly happened in this movie.

Minow: I have to say one of my favorite moments in the movie is when all the bishops in their bright red robes are clicking their blue pens as they get ready to vote.

McCarten: That’s just great directing. That’s not stuff you necessarily write. Perhaps if you were dreaming yourself into that particular moment, but this time, that was the director.

Minow: In some of your other films based on real-life characters you had tremendous amounts of information about what went on even in their private moments. You had correspondence and diaries as well as a lot of documentation of their public moments. But here you really had to imagine conversations that no one knows anything about.

McCarten: You’re quite right. This is probably the most adventurous of the films I’ve done. There’s some artistic license but, I hope no less responsible than anything that I’ve done and ultimately, hopefully, no less truthful. These conversations that I imagined are based on deep research. In fact I did so much research that there’s an accompanying nonfiction book that you can buy in all good bookstores which shows how I really went into their pasts and looked at all the circumstances surrounding the resignation of Pope Benedict. It’s essential in all these ventures that you get it right as much as possible and in this particular case it is literally sacred ground. So, it cannot be careless and it cannot be flippant in any way. It has to be embedded in known truths. In fact, even when I create these long dialogues between these two, those dialogues are reflections of their stated positions about the future of this 2000 year old institution.

Minow: Of course there are many differences between them and we see that particularly in the first half of the film. But I was really struck by their similarities, particularly what Christians like to describe as grace. They had different interpretations of scripture and ideas about the church but they approach each other in a very humble and open way.

McCarten: Both had the direct experience of having a crisis in their faith and having to look into themselves. Both had lived through tyrannical dictatorships and had learned good and bad lessons from doing so. And both had something else extraordinary in common — that only the other person knows what it’s like to be a spiritual guide for 1.4 billion people. So, it was easy to show that despite their obvious differences of character and philosophy and theology that there was a sort of brotherhood between them that was not the first apparent to them. That’s the sort of journey they undergo. I think that this movie starts out like a prizefight between two boxers that trade their best blows until it all comes down. It’s only when they retire to a small antechamber and sit in silence that the real dialogue begins, where they start to listen to each other, get to understand each other on a human level and through that human touch they really begin to forge understanding and a kind of surprising friendship.

Minow: The beauty and majesty of the locations also bring a lot to the story.

McCarten: And I hope authenticity, so as much as possible we tried to shoot on actual locations. I mean it’s not possible to close down the Sistine Chapel or to shoot there so that had to be built. It’s a one for one scale model of the actual Sistine Chapel. Fernando is shot in real locations and in the movie when you see a young Cardinal Bergoglio who becomes Pope Francis, when you see him in the confessional box and you see his calling to become a priest, that was filmed in the actual confessional box were Bergoglio had an epiphany. There is the aerial shot of Castel Gandolfo, the real summer retreat of the pope and we shot on the edge of St. Peter’s Square. So yes, there was every effort made by Fernando and his team and the production designer to make this feel as real as possible and they achieved that quite admirably. 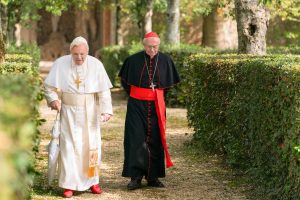 Minow: Why do you think that Pope Benedict wanted someone whose views were so different from his to be his successor?

McCarten: I think he reached the point where he thought that Bergoglio should be in competition for that role and the reason I say that is because in my research I discovered that Bergoglio at the age of 75 as a normal matter protocol wrote to the Vatican to retire at the age of which the clergy retire. There was no answer to that letter and so he wrote again and there was no answer to that second letter. That’s most unusual, to not get a reply on something as momentous as a retirement. So the dramatist in me said there’s an interesting sense here that Benedict may not have wished to remove Bergoglio from the running and that says interesting things about an evolution in Benedict as well. He came to realize that perhaps reform was necessary and in fact overdue and urgent and that he was not someone who could bring that about.

Minow: What do we learn from the choice of shoes of Pope Benedict and Pope Francis?

McCarten: It’s an outward sign of daily struggle to be humble and to embrace poverty and to re-enforce that every morning the Jesuits go to help the poor. It’s part of my fascination with promises that I didn’t believe he was born humble and so learned to embrace and charity. He was born into a comfortable middle-class family. There was a period in his life where after his failures during the 1970’s that he had a period of self-reckoning and doubt and guilt and from that he rebuilt himself. It seems to me that this new Francis was one that turned his back and that eschewed luxury and materialism because church should become accountable. And it was all pageantry that was failing to be effective in its service of the poor as it should be.

Minow: How important is it that both Pope Benedict and Pope Francis were from outside of Italy where nearly all of the previous popes had come from?

McCarten: I think that the church has recognized that in the West its numbers are decreasing at such an alarming rate that they had to introduce voices from outside the normal places. The choice of the South American pope is quite necessary and inevitable because it’s only in South America and Africa and Asia where the numbers of church faithful are growing. So, I think it was an attempt to harness the energy of what we call the Third World or the emerging nations that they chose a South American pope.

Minow: What makes a historical figure a good subject for a movie for a feature film? What captures your interest in making them part of a narrative film? 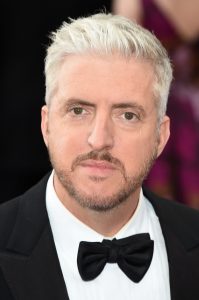 McCarten: I guess if they have an internal obstacle that they face that matches the external obstacles. I’m drawn to stories that involve the intimate and the epic and sometimes the battles are not just raging in the field but within the soul, within the best of the person and I kind of look for stories with this twofold nature of obstacle and conflict. In the case of Churchill, it was his doubts about his ability to run, to save his people British people. Most historians don’t allow for the fact that Winston Churchill ever had any doubts about anything. And I never believed that. It seemed inhuman that someone doesn’t suffer from doubts, especially a man who had made so many mistakes. So that I decided to make a movie about the internal struggle as well as one of the great iconic figures. I think it’s a prerequisite of leadership to be able to think you might be wrong. Those that do not pay the price for that arrogance and so do the rest of us.