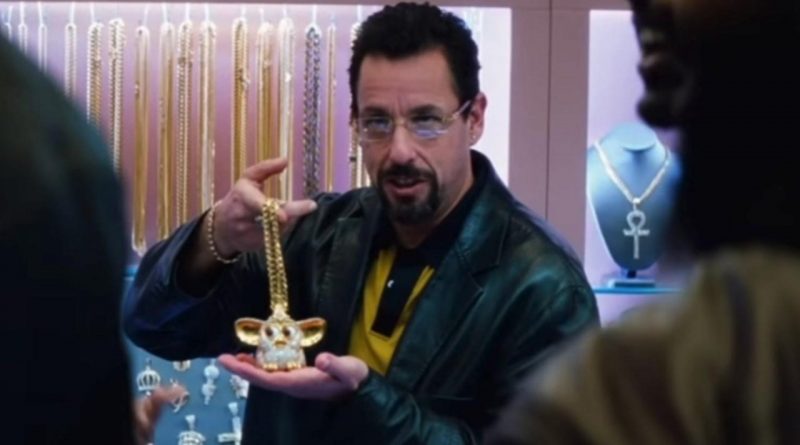 After an injured miner is carried down the mountainside in Ethiopia, two workers quietly disappear into a mineshaft from which they steal a huge, glistening rock.

That scene dissolves into Howard Ratner’s colonoscopy. While Ratner (Adam Sandler) anxiously awaits the results of the gastrointestinal procedure, a mysterious package from Africa is delivered to his jewelry shop in Manhattan’s midtown Diamond District. It’s the uncut black opal – from the opening scene.

Since Ratner estimates it’s worth millions at auction, he uses it as collateral to fund his compulsive, high-stakes sports gambling, even though he’s already deeply in debt to menacing loan sharks.

But the sparkling gem also catches the eye of NBA Boston Celtics superstar Kevin Garnett, whom his buddy (Lakeith Stanfield) brought into Ratner’s store as a prospective customer. Insisting it has mystical power, Garnett wants to keep the opal temporarily, leaving behind his championship ring, which Ratner immediately pawns.

Plus, Ratner’s having a torrid affair with a hot-to-trot employee (Julia Fox), arousing the suspicions of his resentful wife (Idina Menzel), who lives with their children on Long Island. Seemingly intent on destroying not only his business but also his family, fast-talking Howard is incorrigible.

Filmmaking brothers Josh and Benny Safdie (“Good Time,” “Heaven Knows What”) recall stories they heard from their father, Alberto, a Sephardic Jew who emigrated from Italy via France and worked as a jewel runner in the Diamond District. That’s how they explain the character study of Howard Ratner.

Problem is: the vivid vulgarity is so repetitive that it ceases to be shocking, the chaotic plot is predictable and Daniel Lopatin’s aggressive, pulse-pounding synthetic score is too damn loud!

On the Granger Movie Gauge of 1 to 10, “Uncut Gems” is a furious, frenetic 5. Except as a change-of-pace for Adam Sandler, why bother?