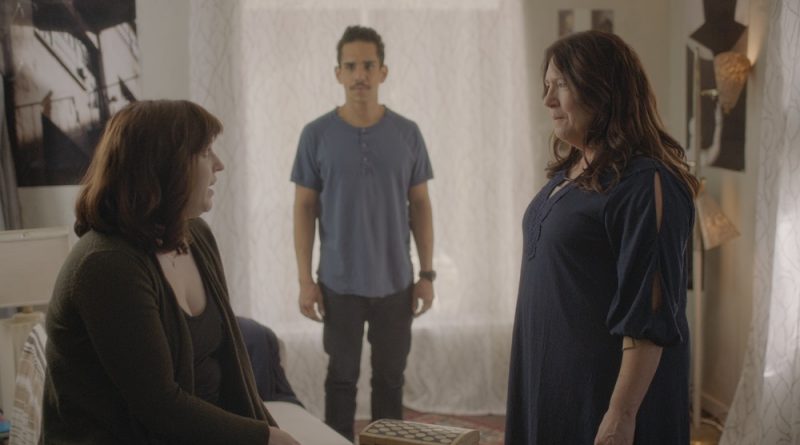 What if, instead of being a space oddity, the infinitely creative David Bowie was actually a time and space oddity, and his passing literally ripped a hole in the universe? That’s the intriguing premise of Liz Manashil’s charming indie dramedy Speed of Life, which centers on an avid Bowie fan named June whose life takes a very unexpected twist after Bowie’s untimely death in 2016. 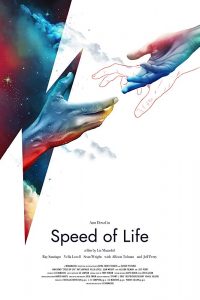 Shaken by the news, June (Allison Tolman) gets into a fight with her boyfriend, Edward (Ray Santiago), questioning the very foundation of their relationship. And then, without warning, Edward disappears into a flash of light in the middle of the living room. June is left bewildered and confused — and, 24 years later, in 2040, she still can’t let go of the fact that he might come back. Now played by Ann Dowd, June is about to turn 60 and is facing the end of life as she knows it thanks to a program that requires people to live in special facilities once they reach senior status. But June has no intention of going quietly — or going at all, for that matter. And then her past comes back to haunt her in a big way.

It’s refreshing to see Dowd, who’s so good at being righteously cruel on The Handmaid’s Tale, doing her best to defy a repressive regime rather than working as hard as she can to uphold it. In Manashil’s capable hands, Dowd’s June is both prickly and vulnerable, obstinate and open to possibility, especially in her scenes with Jeff Perry, who plays June’s friend-who-wishes-he-had-benefits Sam. The film’s near-future world is familiar enough for its differences to be believably unsettling, and the story offers clever twists without forced “gotcha” moments.

Future June lives in a society with no room for independence or privacy — and no respect for those who’ve really experienced life. What she realizes over the course of this thoughtful, appealing film is that she’s let too much of her life go by without really experiencing it, and that it’s time to put the past to rest and finally move forward with courage and hope. David Bowie couldn’t have asked for a better legacy. — Betsy Bozdech

Leslie Combemale Writer/director Liz Manashil’s film Speed of Life offers an opportunity for the wonderfully talented and perennially underused actor Ann Dowd, best known for her Emmy nominated portrayal of Aunt Lydia on The Handmaid’s Tale series, to shine. This fantastical film examines how presence, absence, and how the morphing of memory and emotion over time can impact our relationships with ourselves and others. It features great performances by Dowd and co-stars Ray Santiago and Jeff Perry, and is a meditation on love and the passage of time, examined through relationships and the subjectivity of communication. There’s time travel and multi-verse shenanigans, but the film somehow finds a way to be poignant, due in no small part to the performances. And HUZZAH to Manashil on this: every single department head in the crew, including the first assistant director, the director of photography, the editor, and the production designer, are women. What a great way to start 2020!

Susan Wloszczyna: Filmmaker Manashil has made the rare futuristic fantasy that is driven by emotion rather than special effects – one that examines an intriguing what-if about love and relationships, as well as paying homage to the great David Bowie. Read full review.

Jennifer Merin Filmmaker Liz Manashil’s sci-fi fantasy takes us on a time-twisting junket some 40 years into the future when June (Ann Dowd), a woman who’s turning 60 and facing mandatory relocation to a senior citizen home, reconnects with Edward (Ray Santiago), the love of her life, who’d disappeared through a tear in the fabric of time during a highly emotional argument they were having on January 10, 2016, the night that David Bowie died. Their reunion answers lots of questions for them and raises others — serious questions about true love and relationships and being human. Manashil’s scenario and direction are truly engaging. Dowd, Santiago, and the ensemble give beautifully nuanced and deeply affecting performances. The production crew is mostly female. And the time warp theme touches on many issues — aging, personal privacy, government controls — that seem particularly topical as we enter a new year/decade that;s rife with uncertainty. Speed of Life honors David Bowie with many reverent references — including it’s titular nod to a song on the artist’s first album — and it releases on the anniversary of Bowie’s passing. What perfect timing that is for this little time-twisting indie gem.

Marilyn Ferdinand: Thirtysomethings June and Edward are having an argument about the state of their relationship caused by Edward’s failure to sympathize with her grief over David Bowie’s death that day. Suddenly, Edward steps toward her and disappears with an electric flash. Flash-forward 29 years to a few days before June’s 60th birthday and her government-mandated relocation to a retirement community. June’s life has been on hold since Edward’s disappearance, and when he suddenly reappears, she has to decide how to move into the future. Speed of Life is a wry meditation on grief and memory disguised in a science-fiction plot. The film is a bit confused, but the always-splendid Ann Dowd makes June’s emotional journey a compelling experience.

Liz Whittemore Speed of Life tackles so many every day issues with a clever wit. Life, love, technology, and generational gaps are all explored within a time warped plot. Ann Dowd, who deserves all the awards for her performance, is spectacular. The humor is sharp and the performances from the entire cast have a darling charm about them. Liz Manashil has a lot to say in this little indie gem. It’s a thought-provoking crowd pleaser.

Pam Grady: David Bowie’s death may or may not open a wormhole in a young couple’s apartment through which Edward (Ray Santiago) falls in the middle of an argument, disappearing before June’s (Allison Tolman) eyes. Decades late, June (now played by Ann Dowd) is about turn 60 in that same flat in a society where ageism has hardened into government policy. The lingering question of what happened to Edward complicates June’s life further as she faces either a pitiless American future or life on the run. The plotting of writer/director Liz Manashil’s is full of wormholes itself, a very shaky foundation upon which to build a marginally sci-fi drama. What makes the film work are the little touches that Manashil adds to her dystopian future—one where solid food is no longer a thing, Siri/Alexa-type virtual assistants have become a means of surveillance and control, and Phoenix is now a coastal city—to sell it and the cast’s committed performances. Dowd is spectacular as a woman not about to go gentle into that good night, and she receives excellent support from Tolman, Santiago, and Jeff Perry as the neighbor who clearly loves her.

Marina Antunes It’s always reassuring to see yourself reflected on screen and the opening moments of writer/director Liz Manashil’s Speed of Life perfectly encapsulate one of the many discussions I’ve had with my own partner – though mine never end in the way that June and Edward’s does. Manashil takes a familiar scene as a way in to explore the affects of love and loss on our long-term happiness and the resulting movie is a charming lo-fi, sci-fi drama about how the sudden and inexplicable disappearance of her partner affect’s June’s life far in the future.

Cate Marquis The sci-fi indie film Speed of Life begins on the day when David Bowie died, with a couple, June and Edward, having an argument. June is deeply affected by Bowie’s death while Edward is less moved, and the discussion devolves into an argument about their relationship, when an unseen rift in time appears and swallows up Edward. Decades later, a feisty, stubborn June (Ann Dowd), now approaching 60, is still waiting for Edward’s return. Meanwhile, the world had become a dystopia where meddling machines monitor people’s every move and those turning 60 are required by law to be confined to state-run retirement communities. Ann Dowd is the real key in this futurist fantasy, bringing June to life and giving both heart and weight to the film’s wide-reaching themes of love, relationships, ageism and feminism. The film is partly romance, partly social commentary, and it is by turns silly, sweet, introspective, and warm. Set to open on Jan. 10, the anniversary of David Bowie’s death, writer/director Liz Manashil named her low-budget quirky film after a Bowie album and ties his death to that rift in time into which Edward falls. Surprisingly touching, Speed of Life showcases Ann Dowd, in a winning performance that reflects on life and love – and the cosmic significance of David Bowie.