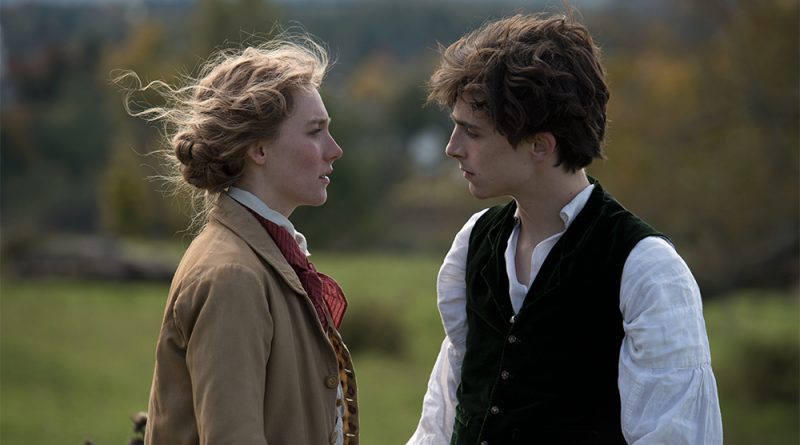 And that’s reason to celebrate this Christmas, as Gerwig’s adaptation remains faithful to Alcott’s semi-autobiographical Civil War-era tale while also imbuing it with new verve and 21st-century relevance.

Beloved by generations of female readers, Alcott’s tale of four sisters growing up in genteel poverty in 1860s Massachusetts remains one of the few American literary classics penned by a woman. Published in two volumes in 1868 and 1869, it unfurled the lives of the March girls in chronological order, starting with their teen years into their becoming “Little Women.”

Gerwig opts to deconstruct the story and tell it in nonlinear order, a bold move that enlivens the familiar tale. Although the leaps between timelines can cause moments of confusion, the rich development of characters and themes proves more than worth the extra attentiveness the approach demands from the viewer.

“Lady Bird” lead and three-time Oscar nominee Saoirse Ronan reunites with Gerwig to star as Jo March, the second and most willful of the March sisters. A budding writer and tomboyish protofeminist, Jo wants to make her own way in the world and has no intentions of marrying, to the consternation of rich and curmudgeonly spinster Aunt March (three-time Academy Award winner Meryl Streep). Jo’s rejection of society’s expectations of women lead her to also reject her childhood pal and would-be suitor Theodore “Laurie” Laurence (Oscar nominee and “Lady Bird” co-star Timothée Chalamet), the grandson of the Marches’ wealthy neighbor Mr. Laurence (Oscar winner Chris Cooper).

Although she is just as intelligent and capable as Jo, the eldest March daughter, Meg (Emma Watson), has dreams that are more domestic and conventional: She wants a marriage, home and children, but her desire to no longer be burdened with poverty conflicts with her burgeoning affections for Laurie’s kindly tutor, John Brooke (James Norton).

A talented pianist and skillful peacemaker, the third March sister, sweet and shy Beth (Eliza Scanlen), has a heart full of charity and compassion, but the organ itself is rather weak. And the youngest and most spoiled of the brood, Amy (Florence Pugh) is a headstrong blond beauty as well as an ambitious aspiring artist who often clashes with Jo.

A two-time Academy Award nominee, Laura Dern fills the screen with a wonderfully warm and wise presence as the family’s steady matriarch, Marmee. The accomplished cast also includes Bob Odenkirk as their gentle father, Robert, who misses part of the girls’ childhood serving in the Union Army; Louis Garrel as Friedrich Bhaer, a German professor who critiques Jo’s writing and sets out to win her heart; and Tulsa native Tracy Letts as Jo’s matter-of-fact publisher, Mr. Dashwood.

Along with the lovely performances, Gerwig’s sterling adaptation features fantastic period costumes by Jacqueline Durran, an impeccable score by Alexandre Desplat and gorgeously golden-tinged cinematography by Yorick Le Saux, ensuring that the film is just as good for the eyes and ears as it is for the soul.