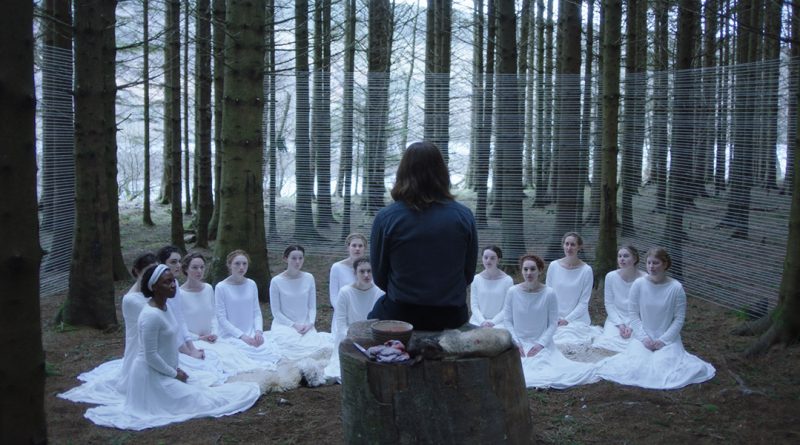 2019 has been a curious year for that blurry subgenre of religious cult films. In horror, both Ari Aster’s Midsommar and Veronika Franz and Severin Fiala’s The Lodge centred on the dark side of religious cults, while cults based around a kind of spiritual mania are also core to John R. Leonetti’s The Silence and even Mike Flanagan’s sequel to The Shining, Doctor Sleep. Beyond horror, Jorunn Myklebust Syversen’s Disco presented an extraordinary portrait of a young woman trapped within the confines of her fundamentalist Christian community as she struggled with mental health issues.

But it is perhaps Polish filmmaker Małgorzata Szumowska’s English-language feature debut The Other Lamb that provides the most undisguised assault on the corruption of faith by sadistic cult leaders to justify systematic gendered abuse.

Deliberately vague about its historical setting at first, The Other Lamb follows a young woman called Selah (Raffey Cassidy) who lives with her sisters and many mothers in a religious community under the control of the only man of the group, Shepherd (Michiel Huisman). With their basic garments simply yet effectively color-coded to denote each woman’s position in their small community, Selah’s menarche coincides with a growing discomfort and questions about Shepard’s assumed beatification that all of the other women in the group never have seemed to question; well, almost none of them.

Desiring to learn more about her late mother and the circumstances in the cult that lead to their separation, Selah tentatively at first begins asking questions, and when the group flee their camp after the arrival of suspicious police officers, Selah’s intuition leads her to shocking discoveries about Shepherd, his past, and his attitude towards women.

Award-winning Szumowska had already received numerous major prizes at the Berlin International Film Festival across the years for her work, including In the Name Of (2013), Body (2015), and Mug (2018). Through her own writing and directing as well as co-producing films such as Lars Von Trier’s Antichrist (2009), she is a clearly a filmmaker whose work is marked by a signature fearlessness.

Stepping away from writing duties on The Other Lamb, however, Szumowska worked from a powerful, well-researched script by Australian screenwriter Catherine S. McMullen. Between these two central creative figures there is little interest in making the symbolic elements of the story particularly subtle. There is instead a palpable anger at patriarchal institutions that bleeds from McMullen’s pen as much as it does through Szumowska’s camera as they unpack the precise mechanics of dominance and submission, and how such abuses can become naturalized and institutionalized until stepping back and asking ‘why?’ becomes a radical act in its own right.

Superbly cast with Cassidy as Selah, the young actor’s earlier work in Yorgos Lanthimos’s brutalizing 2017 film The Killing of a Sacred Deer as Colin Farrell and Nicole Kidman’s characters daughter Kim in particular comes to mind here. Cassidy has a seemingly intuitive ability to balance restraint and excess in these dark, psychologically dense horror and thriller roles that indicate only the beginning of an impressive career that surely lies ahead.

An impressive English-language debut for one of Poland’s most compelling contemporary filmmakers, The Other Lamb is engrossing, thoughtful and unhesitating in its ideological messaging.