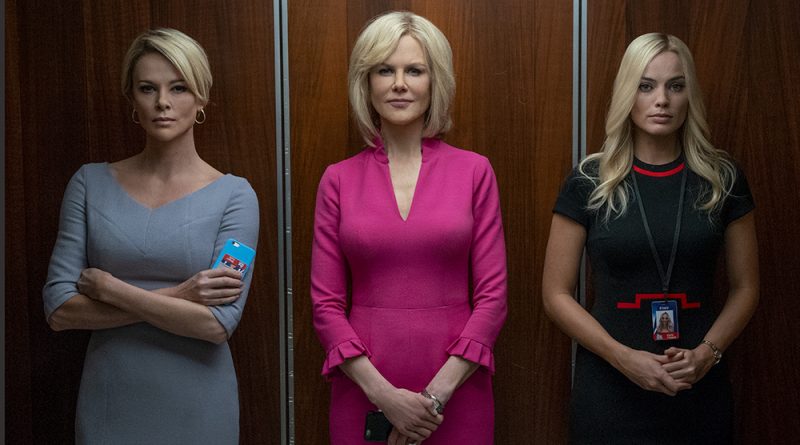 The film’s star trio does its part to light the fuse of “Bombshell”: Oscar winner Charlize Theron channels former Fox News star Megyn Kelly so effectively it’s easy to forget you’re not watching the one-time anchor herself. Oscar winner Nicole Kidman exudes the seething anger and surprising (especially to Ailes) smarts and steeliness of demoted “Fox & Friends” co-host Gretchen Carlson, who figured out how to make the case against the supposedly untouchable Ailes, who died in 2017. But Oscar nominee Margot Robbie gives arguably the most powerful performance as Kayla Pospisil, a composite based on several women who eventually came forward with harassment allegations wrapped up in the character of an ambitious young producer who wants to be the next Fox News star.

Academy Award-winning makeup artist Kazu Hiro (“Darkest Hour”) and the entire makeup team deserve kudos for their transformational work, and the star-studded cast delivers even in limited roles, especially scene-stealer Kate McKinnon, who gets all the funny lines explaining what goes into a Fox News story and why the channel is so addictive to so many viewers.

“Bombshell” manages to illuminate how Ailes’ alleged attitudes toward women pervaded the entire culture at Fox News, including the network’s failure to adequately defend Kelly when now-President Trump and his followers viciously verbally attacked her during the 2016 campaign, and effectively argues that all women deserve a safe, harassment-free workplace, even self-declared anti-feminists like Kelly, who infamously lost her post-Fox News post at NBC for defending blackface Halloween costumes.

Directed by Jay Roach (HBO’s “Game Change”), there’s a cheeky playfulness to the film that’s unneeded, borderline offensive and counterintuitive. Even the movie’s title seems to winkingly marvel that a group of beautiful blondes – which was basically a requirement for a woman working at Fox News – brought down Ailes, undermining both what they suffered in his allegedly toxic workplace and what they risked in speaking out.

Charles Randolph incorporates the same snazzy techniques in “Bombshell” that he used so well to explain the 2008 financial crisis in his Oscar-winning screenplay for “The Big Short.” But conveying the fundamental right of women to make a living without having to tolerate sexual harassment shouldn’t require the kind of whiz-bang storytelling needed to, say, entertainingly explain the fundamentals of subprime mortgage lending.

The look of betrayal, shame and devastation on Robbie’s face as Lithgow’s Ailes coerces her character into hiking her short skirt ever higher during a closed-door “audition” does more to impart the soul-crushing effects of sexual harassment than all the fourth-wall breaks, showy jump cuts and other cinematic gimmickry used to turn the commodifying of women’s bodies under the guise of journalism into zippy film fun.