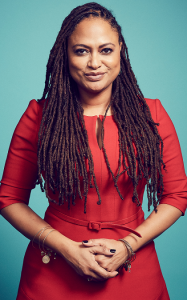 It’s hard to think of a more galvanizing, charismatic woman in film than Ava DuVernay. The 47-year-old producer, director, writer, distributor, and crusader for social justice broke into the larger cultural zeitgeist in 2015, the year her acclaimed film Selma was nominated for two Academy Awards, including Best Picture, and four Golden Globes, and won the AWFJ EDA Award for Best Woman Director.

DuVernay also received a coveted Director Tribute in December, 2019 at the Independent Filmmaker Project’s 29th Gotham Awards in New York City, and her miniseries When They See Us, about the wrongful conviction and eventual exoneration of the Central Park Five, won a Gotham Award for Breakthrough Series—Long Form. Kudos to DuVernay. She deserves it all.

At a time when it is still hard for women directors to sustain a career past their second picture, DuVernay has forged her own path, toggling between TV and movies, documentaries and feature films with small and large price tags alike. She made an outraged 2016 documentary, 13th, about the 13th Amendment to the U.S. Constitution that both abolished slavery and reestablished it within the walls of American prisons, and is following it up with a big-budget studio feature, A Wrinkle in Time, based on the beloved fantasy novel by Madeleine L’Engle.

DuVernay also distributes the work of people of color and women directors through ARRAY, the film collective she founded in 2010. Dedicated to the amplification of images by people of color and women directors of all kinds. ARRAY Releasing focuses specifically on grass-roots distribution of feature narrative and documentary work by varied voices, and has issued outstanding, award-winning works such as Akin Omotoso’s Vaya (2016), Ellie-Máijá Tailfeathers and Kathleen Hepburn’s The Body Remembers When the World Broke Open (2019), and Phillip Youmans’ Burning Cane (2019).

DuVernay’s popular series, Queen Sugar, is illuminating. Now in its fifth season on the Oprah Winfrey Network, the series not only focuses on the struggles of a contemporary African-American family who are trying to keep their inherited sugarcane farm going and preserve their way of life, but is also laudable for DuVernay’s inclusion of women directors and other crew on the show’s staff.

DuVernay’s filmmaking career grew out of more than a decade’s experience running her own public relations firm. Many of the nearly 100 films she promoted were by and about underrepresented artists and communities, including What’s Cooking (2000), Lumumba (2000) Beauty Shop (2005) and A Good Day to Be Black & Sexy (2008). 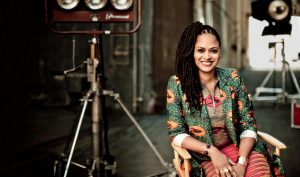 She said in a 2012 article in Interview magazine, “I represented a lot of filmmakers, and I was always around them. … Being so close to really great filmmakers and watching them direct on set and the experiences that I did have, although different from film school, were still super valuable. … I coupled that with some very intentional study and practice—picking up a camera—and started just making it.”

Following her self-funded fiction debut, I Will Follow (2010), her path to success was clearly eased after she became the first African-American woman to be honored with the award for Best Director at the 2012 Sundance Film Festival for her second feature film, Middle of Nowhere.

Written and directed by DuVernay, the narrative film tackles two subjects of relevance to women and African Americans—a Black man’s incarceration and plight of the wife whose idealized view of their relationship causes her to abandon her own goals and relationships waiting for him. The plot could have come out of a woman’s film of the 1950s, but DuVernay’s script and direction never preach, and she examines compassionately the depths of her protagonist’s struggle with her conflicting emotions and aspirations.

As a measure of just how much influence DuVernay wields in the larger world of popular culture, the very mainstream Mattel Toys issued a limited-edition Ava DuVernay Barbie for the 2015 holiday season and was persuaded by her fans to increase the edition; the dolls sold out in only two hours. Characteristically, DuVernay donated her share of the sales to two nonprofits: Witness, which trains and supports people who use video to champion human rights, and Color of Change, which amplifies the political voice of underrepresented communities. 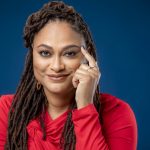 Ava DuVernay has crashed through boundaries and expanded professional and personal possibilities for women, and especially women of color, working in film, and everywhere else. DuVernay has our greatest respect for her artistry, her dedication to freedom and equality for all people, and her innovative leadership by example. — Marilyn Ferdinand