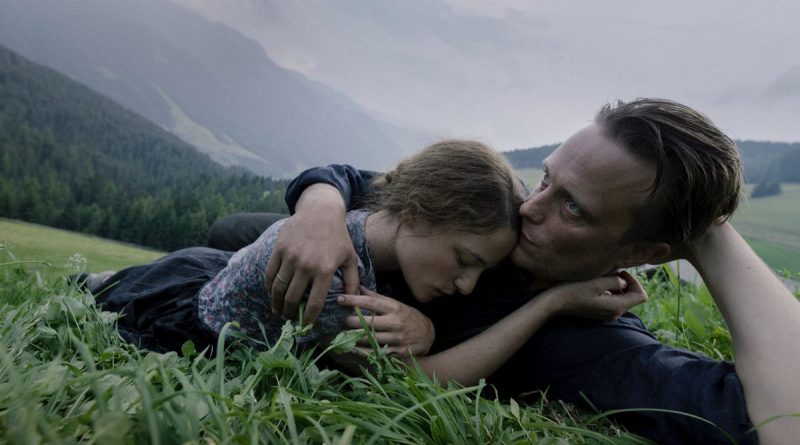 Auteur filmmaker Terrence Malick chronicles the true story of Franz Jagerstatter (1907-1943), a devoutly Roman Catholic farmer who was imprisoned, sentenced to death and executed for refusing to fight for the Nazis after Hitler invaded Austria in World War II.

Told through poetic letters between Jagerstatter (August Diehl) and his wife Fani (Valerie Pachner), it begins with a black screen and the outdoor sounds of nature, as Franz says, “I thought we could build our nest high up in the trees…Fly away like birds.”

Content in each other’s company, Franz and Fani live with their young daughters in the small Alpine village of St. Rageund. When he was conscripted for military service in 1938, Franz felt the Nazi cause was unjust.

“We’re killing innocent people and invading other countries,” he explained to his parish priest (Tobias Moretti) and, subsequently, Bishop Fliesser of Linz (Michael Nyqvist)…only to be told: “You have a duty to the fatherland. The church tells you so.”

Nevertheless, highly-principled Franz declined the required loyalty oath to Adolf Hitler and suffered the consequences, as did his wife, whom the villagers subsequently ostracized.

Although Franz Jagerstatter’s sentence was nullified by a Berlin court in 1997 and he was declared a martyr, even beatified by Pope Benedict XVI in 2007, that’s not part of writer/director Malick’s contemplative narrative, not even in the end-credits.

While Malick has not publicly promoted this film, August Diehl points to the rise of the Far Right in the United States and in Europe, noting: “If it’s about our society, it’s about how a person who says ‘no’ is getting more rare…Maybe this movie is not only political but personal…possibly everyone is jumping on a train going in the wrong direction.”

On the Granger Movie Gauge of 1 to 10, A Hidden Life is a slow, somber, visually sumptuous 7, a timely meditation on faith and conscience.