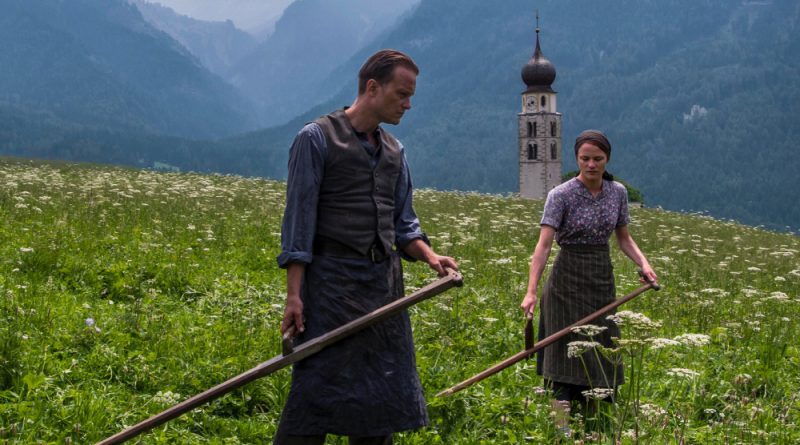 With “A Hidden Life,” Oklahoma-bred auteur Terrence Malick has created a war movie with no battlefield sequences, minimal bloodshed and just a few soldiers.

But make no mistake, it is a war movie, and there are certainly casualties.

Since the 2011 release of his acclaimed experimental drama “The Tree of Life,” which won the Palme d’Or at France’s Cannes Film Festival and snagged three Academy Award nominations, Malick, who grew up in Bartlesville, has spent much of the past decade making meandering, visually stunning, avant-garde dramas with little story or dialogue.

Among those was a personal favorite, 2012’s gorgeous cinematic poem “To the Wonder,” which was partially filmed in Oklahoma. Still, I was pleased and relieved to hear that Malick was returning to a more convention narrative approach by making that most conventional style of films: A biopic.

But “A Hidden Life” still has many of the same hallmarks of his more esoteric work: the long run time, sparse dialogue, contemplative tone and, especially, the frequent use of resplendent scenes of natural beauty.

The three-time Oscar nominee’s “A Hidden Life” is based on the true story of devout Austrian peasant farmer Franz Jägerstätter, who refused to take an oath of loyalty to Adolf Hitler and was ultimately imprisoned and executed for it. In 2007, he was declared a martyr and beautified by the Catholic Church.

In a powerful, unfussy turn, August Diehl (who played a smarmy Nazi in Quentin Tarantino’s “Inglourious Basterds”) portrays Jägerstätter, a hard-working man of few words who adores his wife, Fani (Valerie Pachner, equally impressive), and their three daughters and is respected in the small, pastoral farming community of St. Radegund.

Isolated high in the Alps, life there doesn’t seem to change much when Germany invades and takes over Austria, but the community proves fundamentally altered once it becomes known that Franz refused to swear allegiance to Hitler during his military training.

But it’s clear that most of his neighbors are too afraid or too blindly loyal to their country to stand with him, while others take to quoting Hitler’s rhetoric, railing in the square about the evils of immigrants and foreigners in a town where there seems to be none of either. Franz is labeled a traitor and a coward by his one-time friends.
Franz appeals first to his local priest (Tobias Moretti), then to the bishop (the late Michael Nyqvist in his final role), but surprisingly, they advise him to take the oath, saying that his resistance won’t change anything and will come at too high a price for him and his family.

He is eventually called up for military service, and when he refuses to take the oath, sent to prison to await a military trial. But not before he and his family become outcasts: Their neighbors spit on them, the other children throw mud at their daughters, and once Franz is gone, the other farmers refuse to help Fani with the back-breaking labor of tending the land and livestock.

Franz’s mother (Karin Neuhäuser) and sister-in-law Resie (Maria Simon) plead with Fani to convince Franz to stop holding out, but she decides to support him no matter the cost. Franz’s appointed attorney (Matthias Schoenaerts) and judge (the late Bruno Ganz) try to save his life by promising him a non-combat role as a medic if he will just take the oath.

He is subject to beatings in prison and the threat of death, but Franz holds out.

“If God gives us free will, we are responsible for what we do – and what we fail to do,” Franz insists. “We have to stand up to evil.” He doesn’t say much, but he is clearly more focused on the state of his soul.

Nominated for the Palme d’Or at Cannes 2019, “A Hidden Life” is another of Malick’s films that is more tapped into the rhythms of nature, which continues on its cycles despite the disruptions of war and turmoil, than of modern-day filmmaking. The cinematography by Jörg Widmer is indescribably beautiful; music by James Newton Howard is gorgeous.

The film runs almost three hours and could certainly be shorter, but at the same time, it’s hard to argue it doesn’t earn such an epic runtime.

After all, in an era when few filmmakers are addressing them, “A Hidden Life” is exploring themes of faith, love and sacrifice, and issues just don’t get bigger picture than that.