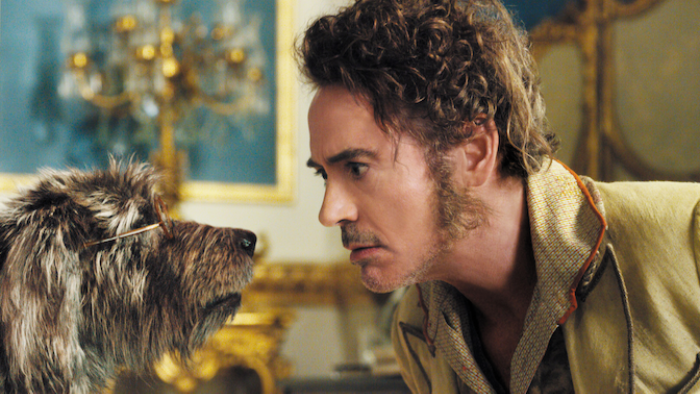 Unfortunately, Dolittle is a prime example of an ill-advised notion that a filmmaker, in this case writer/director Stephen Gaghan, known for his intensely violent films “Traffic,” and “Syriana,” can effectively cross over into the genre of film’s based on classic children’s literature.

The beloved Dr. Dolittle books—-penned in 1920 by Hugh Lofting—are intended for children ages nine and ten, but Gaghan’s adaptation has fear-provoking violence between animals, as well as a terrifying attack by a fire-breathing dragon. These are two reasons why I can’t recommend Dolittle. Additionally, there is a ‘dark tone’ to the character of Dr. Dolittle that is problematic.

Not only does Robert Downey Jr. (Dr. Dolittle) have a chaotic script to work with, his accent that should be English is a muddled form of Welsh—with bits of Irish in the mix. Downey has stated that he chose to play Dolittle as an outsider Welshman, and worked with a dialect coach to learn the challenging accent—regardless of inconsistency and incoherency—only added to his discernible character faults through the duration of the film.

Although Dr. Dolittle is a loner with the skill of mastering all animal languages, he’s also known as a brilliant physician. So, what’s the reason behind his snarky tone, especially in his relationship with the children in the movie? Although Robert Downey Jr.’s Iron Man character has an indifferent, teasing attitude towards kids in those films, the undertone is endearing and his gestures indicate a true gentleness—quite the opposite of what occurs in Dolittle where his blatant indifference creates an unrelatable character.

Beginning seven years after the death of his wife, Lily, he serves as the veterinarian to Queen Victoria’s England and lives as a hermit behind the high walls of Dolittle Manor desiring only the company of his animal friends. And what a great cast of animal friends, Chee-Chee (Rami Malek), a self-doubting gorilla; Dab-Dab (Octavia Spencer), a silly duck; the squabbling duo of a fearful ostrich Plimpton (Kumail Nanjiani)) and aloof polar bear Yoshi (John Cena); and lastly the stubborn parrot named Polynesia (Emma Thompson), serving as Dolittle’s confidante. The animals are fun to watch; however, their relatively basic dialogue is a missed opportunity to give them pizzazz, or unique situations with Dolittle whose ‘talking to the animals’ is basically chatty idle talk’ by all.

A shining star is the Queen’s young future lady-in-waiting Lady Rose (Carmel Laniado), who insists that Dolittle help save the dying Queen from a mysterious illness. Yes, she holds her ground with fierce determination yet isn’t given an ounce of hope—again a miscue by the writers. Her scenes with Tommy Stubbins (Harry Collett, “Dunkirk”), a 12-year-old boy, are the highlight of the movie. Both of their performances are tremendous.

Initially, Stubbins seeks out Dr. Dolittle as he needs help with an injured squirrel. Even though Dolittle attends to the squirrel, he tries to discourage Tommy from learning about his gift of talking with the animals, although begrudgingly takes him under his wing. Again, not a story-line to be embraced by kids. The other two male adult characters are also bizarre; Dr. Blair Müdfly, (Michael Sheen), the royal physician, is frustrated trying to cure terminally ill Queen Victoria. He’s jealous of Dolittle’s esteemed reputation in the palace, and his anger toward Dolittle turns him into a raving lunatic. Lily’s father, The Pirate King Rassouli (Antonio Banderas), has a vendetta against Dolittle, and he blames him for his daughter’s death.

Where are the women in the film? In Dr. Dolittle books, he has two daughters Charisse and Maya; his sister is Sarah, and how about adding Archer, his father? It’s a shame these characters aren’t incorporated into the script. For that matter, where are any nurturing adults, and where’s a ‘voice of reason’?

The outlandish shift in the plot adds further chaos, moving from England to an adventure off to the pirate port of Monteverde to find a journal that holds the key to finding the mystical Eden Tree Island. Abruptly, the film veers off course with shades of Pirates of the Caribbean.

The ending credits include a scene with psycho Dr. Blair Müdfly, surrounded by bats in a cave. Does this mean the sequel will feature vampire Müdfly’s continued revenge? If so, “Oh, please don’t go there!”