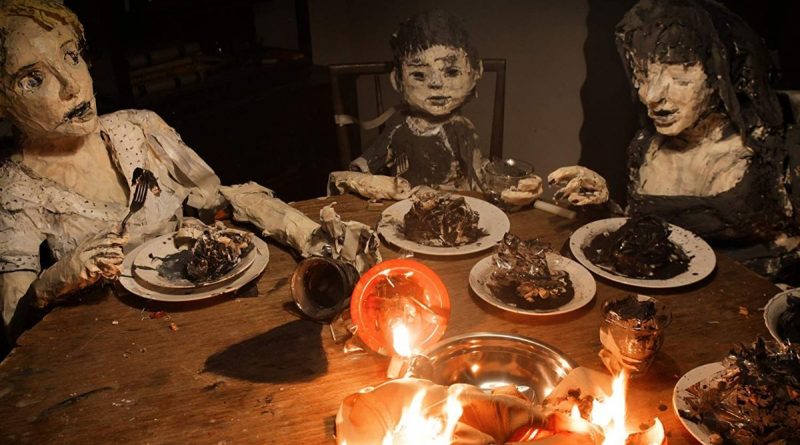 The Wolf House offers mind-boggling animation in a fantasy tale.
​
Cinema today offers a treasure trove of animated films, nothing more imaginative than the Chilean fantasy The Wolf House, La Casa Lobo in its original Spanish. Writers/directors Joaquin Cociña and Cristóbal León transform a fairy tale nightmare into a haunting, disturbing story through stop-motion animation using what looks like paper mâché characters along with two and three dimensional objects.​

Those objects include small furniture, sculptures that transform, tape that unravels and reforms, cellophane that crinkles and snakes about, real candles that magically light, and, most important of all, two pigs that evolve quite magically into a boy called Pedro and a girl called Ana. All of this springs from the mind of Maria. For letting three pigs escape their pen, she’s punished for a hundred days and nights in a secluded, wolf threatened cabin. The fantastical story is introduced by an unseen narrator speaking over real life video images.

Before any titles, he says, “You’ve probably had the opportunity to taste the unparalleled flavor and texture of ‘The Colony’ honey.” He goes on to say that a dark legend swirled around its mysterious origins. No more. Film rescued from Chilean vaults will dispel the dark legend regarding an isolated (and a real) German community. And so it begins.

The only animated films remotely like The Wolf House are Coraline for its creativity and Loving Vincent for its frames segueing from one painting into another. But here they melt and flow and reform with a moving camera in this unique, intriguing, frightening, five year labor of love—the wolf always at the door, seen once on a tv.

Credit to the voice talent, long ago deserving its own Oscar. The same person, Amalia Kassai, provides the narration for Maria, Anna and Pedro, with the wolf spoken by Rainer Krause. Their mellifluous quality and soft manner make the tale all the more eerie and effective. This film is indescribable and amazing. In Spanish and German with English subtitles.