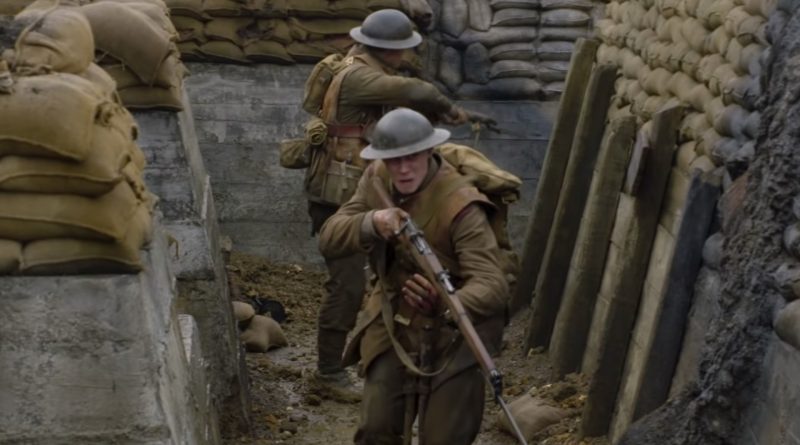 Academy Award-winning writer-director Sam Mendes, co-writer Krysty Wilson-Cairns and legendary Oscar-honored cinematographer Roger Deakins deliver some of the most memorable cinematic moments of 2019 – and arguably of any war movie – with the stunning “1917.”

Known as both “The Great War” and “The War to End All Wars,” the First World War was a brutally sprawling conflict that killed about 17 million soldiers and civilians. Most of the acclaimed films about World War I – from “Lawrence of Arabia” and “All Quiet on the Western Front” to “War Horse” and first Academy Award winner “Wings” – are sprawling epics.

Inspired by the stories of his grandfather, who served in WWI from 1916-18 as a teenager, Mendes deliberately takes “1917” in the opposite direction, crafting an immersive and intimate film that literally follows two regular soldiers into the trenches and beyond as they embark on a highly irregular mission.

The film – which just earned two Golden Globes, for best dramatic motion picture and best movie director for Mendes – was brilliantly devised, written and lensed to look as if it was shot in one long, unbroken take. Between the clever work of Deakins and editor Lee Smith, it’s an incredible technical marvel.

Rather than turning it into just a fancy gimmick, Mendes and Wilson-Cairns use the unique first-person approach as a powerful storytelling tool to focus the viewer with bullet intensity on one pair of fighters in one corner of a vast global conflict.

They must traverse the trenches, cross No Man’s Land and travel on foot into enemy territory to deliver a vital message to Col. MacKenzie (Oscar nominee Benedict Cumberbatch), who is preparing to launch a ground assault on the Germans. Although MacKenzie believes the Germans are retreating, new intelligence reveals he is sending his 1,600 soldiers into an ambush. If the attack goes on as planned the next morning, the battalion will be decimated, and the enemy has severed communications.

Although he is painfully young and still naive enough to long for wartime glory, Blake has been ruthlessly selected to ferry the communique because his older brother is part of the endangered battalion. Blake picked his stoic pal Schofield, who already has enough battlefield experience to know medals and commendations carry too high a price, to accompany him before he learned what was in store.

With the camera doggedly trailing them, Mendes provides a harrowing landscape that viscerally illustrates the phrase “war is hell.” The pair encounters dead bodies floating in rainwater-filled bomb craters, cohorts shivering and starving in ramshackle trenches and the bloated corpses of war horses abandoned on ravaged battlefields. If they can run the gauntlet of rats, booby traps, explosions, fires and enemy fighters in time to reach MacKenzie, they still have to convince the colonel that his planned offensive is doomed.

Along with Firth and Cumberbatch, “1917” features cameos by several British movie stars, including Richard Madden, Mark Strong and Andrew Scott. But relative unknowns Chapman and MacKay carry the film with their unfussy powerhouse performances.

With its Golden Globe victories and other accolades, “1917” seems poised to make strong a Oscar run. Even more importantly, it serves as a mighty reminder of the inglorious, ruinous cost of war more than 100 years after the so-called “War to End All Wars” proved a sadly inaccurate nickname.