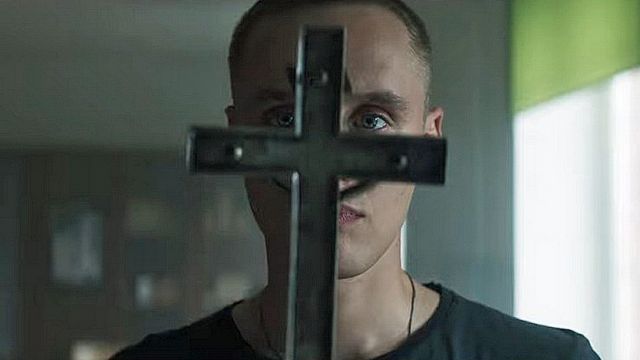 As that gallant, windmill-tilting knight Don Quixote once observed, “I know who I am — and who I may be, if I choose.”

Daniel, the compellingly contradictory protagonist of Corpus Christi, subscribes to that notion. Or tries to, anyway.

Yet the fact that Poland’s Corpus Christi is even in the running attests to its arresting power.

Corpus Christi is one of those movies “inspired,” as they say, “by real events.” Good thing, too; otherwise, we might not be as receptive to its credibility-stretching premise.

The movie opens at a youth detention center, where 20-year-old Daniel (Bartosz Bielenia) is awaiting parole, caught between the prison’s inescapable brutality and the spiritual sanctuary its Catholic chapel provides.

Daniel would like to study for the priesthood once he’s released, but his criminal record disqualifies him. Instead, he heads to a small town and a job at the local sawmill.

A clerical collar he’s stolen, however, enables another escape — and another identity as a young priest on a parish-to-parish pilgrimage.

The local priest’s poor health creates an opportunity for Daniel to take his place, temporarily, and step into a new life.

At first, Daniel confines himself to memories of prison chapel prayers and confession-booth protocol gleaned from his mobile phone.

But as he gets to know the townspeople — haunted by a tragedy that has shattered their outwardly orderly lives — Daniel finds his voice, discovering a genuine gift for spiritual connection.

Lest we forget, he also has a past — one destined to catch up with him, making it ever more difficult for him to maintain his masquerade.

Neither would be as effective, or affecting, without Bielenia’s dynamic intensity in the central role.

Blessed with the soulful eyes of a martyred saint, Bielenia builds a persuasive character who tempts us to believe — and believe in — him, even when we know the truth.

Then again, everyone has sins to confess — a truth Corpus Christi knows all too well.