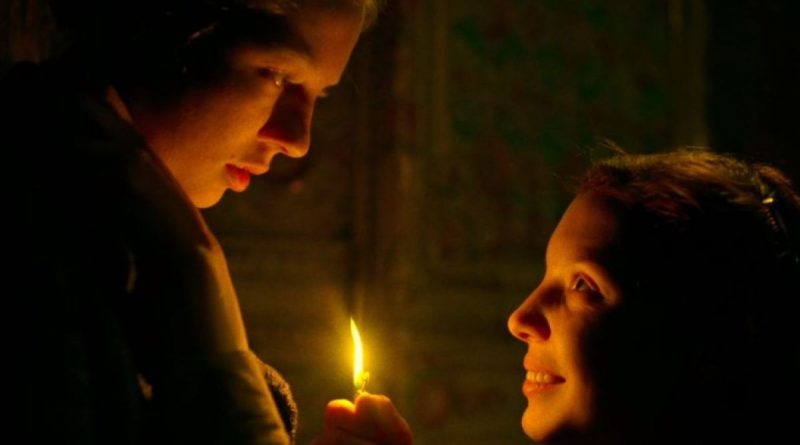 Settings don’t get much bleaker than 1945 Leningrad, decimated after the ravages of WWII, but even the darkest times have moments of intimacy and beauty in Kantemir Balagov’s spare, unflinching Russian drama Beanpole. The film tells the story of the intense, complicated friendship between gangly, awkward Iya (Viktoria Miroshnichenko) — the titular Beanpole — and impulsive, yearning Masha (Vasilisa Perelygina) as they struggle to find happiness in a post-war world. 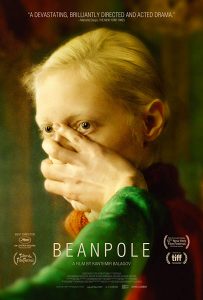 The two women, friends since their time on the front, are very different, but they’re bound by shared experience, shared tragedy, and the desire to have something to hold onto when it seems like there’s nothing good or solid left. Iya has been working in the army hospital since being invalided out of combat service due to an unusual condition (implied to have been caused by the horrors of war) in which her whole body freezes up. The temporary paralysis is unpredictable and uncontrollable, and one night it leads to an inconceivable loss. Soon Masha joins Iya on the hospital staff, but Masha longs for more; specifically, for a child to bring meaning and affection to her life. Her single-minded focus on that goal — and Iya’s passionate devotion to her friend — take them places neither ever expected to go.

To reveal more than that about the plot would detract from the emotional punches of its twists and turns. Suffice it to say that things get very dark, and all hope often seems lost. But amid the characters’ pain and suffering are moments of startling delicacy: A scene in which Iya gently shares cigarette smoke with a paralyzed hospital patient is heartbreaking, and Masha’s happy-then-frantic twirling in a beautiful borrowed dress shows the fine line between joy and agony.

The two leads both deliver powerful performances. Miroshnichenko’s Iya is incapable of hiding her feelings from (or for) Masha; she loves her friend more than anyone else but also resents the power Masha holds over her. And Perelygina is unbelievably vulnerable as Masha, who blusters with worldly wisdom but yearns more than anything for a baby to love. The fact that she believes that having a child is her only chance at healing and happiness is tragic — but that’s par for the course in Beanpole‘s world, where no connection is without pain, and the only way forward is to grab at any warmth or happiness that happens to cross your path. — Betsy Bozdech

Sheila Roberts Beanpole is a tough film to watch. It’s powerful, deeply moving, cruel and ferocious, but definitely worth your time. Filmmaker Kantemir Balagov is a brilliant young director who made a bold decision to cast unknown, first-time actresses in extremely demanding roles. His daring choices paid off. Viktoria Miroshnichenko and Vasilisa Perelygina elevate this Cannes-winning Russian psychodrama to an Oscar-worthy contender. Read full review.

Marina Antunes Set in the aftermath of WWII Kantemir Balagov’s Beanpole takes us into the lives of two women trying to survive after the war. Iya, lovingly referred to as Beanpole due to her tall stature, and her best friend Masha spent time together on the front and now that the war is over the pair’s complicated relationship is re-kindled and the two women once again find themselves relying on each other for survival. Beanpole captures the hardships of war and its aftermath through the lives and experiences of the women who survived it but it’s also a beautiful film about female relationships. Balagov and co-writer Aleksandr Terekhov don’t recoil from the ugliness and pettiness between them and it’s left to Viktoria Miroshnichenko and Vasilisa Perelygina as Iya and Masha respectively, to fill the silent spaces with emotionally powerful performances that relay the love and admiration between the two women.

Liz Whittemore Beanpole is one of the most stunning cinematic ventures in recent history. Post-war trauma, both physical and emotional, gives this film a sadness that is visceral to a viewing audience. The hypersaturated greens and reds in every single scene are wholly enveloping. Performances large and small are captivating, from Iya (the titular character) and Masha, to the soldiers in the hospital ward. Issues of poverty, class, and depression all rule this script. Beanpole is a treasure.

Leslie Combemale There are not enough Tom and Jerry cartoons in existence to compensate for the level of hopelessness represented in the Russian film Beanpole, which won its director/co-writer Kantemir Balagov the Un Certain Regard Best Director Prize at Cannes in 2019. Read full review.

Nell Minow: We often speak of young filmmakers as promising. But 27-year-old director Kantemir Balagov is a remarkably assured and accomplished filmmaker already, with a mastery of cinematic storytelling that works on many levels. The story is painful but the performances, settings, and cinematography give the direst circumstances a dignity that adds layers of meaning.

Pam Grady: The Soviet Union may have prevailed in World War II, but for residents of Leningrad the battle to regain normal lives is far from over and the outcome is in no way assured in this quietly devastating drama. Iya (Viktoria Miroshnichenko) has been left with PTSD that renders her senseless at times, her body rigid and her mind impervious to the world outside. Her best friend and the woman who Iya loves, Masha (Vasilisa Perelygina), returns from the front lines emotionally damaged, manipulative, and determined to bend others to her will. It is a tentative existence, fraught with emotional landmines. Twenty-seven-year-old director Kantemir Balagov’s second feature is a master class in psychological drama and mood, gorgeously shot, with each small, corrosive scene building onto the next until the full, unforgettable portrait of these women’s shattered lives comes into sharp, merciless focus.

Jennifer Merin Beanpole is a dark (very dark) Russian drama about two women who are pushed to the edge by desperation. Set in 1945 Leningrad, the narrative explores the co-dependent friendship between Iya (aka Beanpole, because she is so tall) and Masha who are struggling to survive the extreme hardships of their war ravaged city and to find meaning in their terrifyingly dismal lives. Their often shocking, sometimes horrifying behavior graphically depicts how war impacts the female psyche. Director/co-writer Kantamir Balagov’s great respect and empathy for his characters, and female cinematographer Kseniya Sereda’s intimately observational camerawork result in an utterly compelling call for compassion from the audience. Winner of awards at Cannes and numerous other prestigious film festivals, Beanpole is gut-wrenching and sometimes hard to watch. Frankly, it is one of the darkest films I’ve ever seen. But, Beanpole is a must see.

Sandie Angulo Chen: Beanpole is a beautiful but heartbreaking film. Centering on two young women in 1945 Leningrad, the Russian drama touches upon themes of war, motherhood, friendship, loyalty, violence, and sacrifice. As the titular Iya, a nurse tending the war’s scores of injured and wounded soldiers, Viktoria Miroshnichenko is extraordinary; so is Vasilisa Perlygina as Iya’s best friend Masha, herself a former soldier. The women, both of whom deal with post-traumatic issues, share a complicated history which becomes even more complex after an unthinkable tragedy changes their postwar lives. The brilliant central performances are matched by Kseniya Sereda’s gorgeous cinematography and the thoughtful direction of a young award-winning filmmaker, Kantemir Balagov.

Loren King The film recalls Romanian director Cristian Mungiu’s 4 Months, 3 Weeks, and 2 Days and Pawel Pawlikowski’s Poland-set Ida in its haunting despair and in its rendering of how powerless young women try to harness some primitive control — over one another, over their circumstances — just to feel alive again. Read full review.

Cate Marquis The title suggests something comic but there is little of that in this searing Russia tale of two women combat veterans of WWII, tall, quiet Iya and lively, impulsive Masha, struggling with the past and a horrific present in post-war Moscow. Bleak but compelling, Beanpole plunges us into the world of these two women, who are both scarred physically, emotionally and psychologically, and bound by tragic events, as they struggle to reach a heartbreaking, misguided attempt at healing. Beanpole was Russia’s Oscar entry and one of the most talked about films on the film festival circuit this past year. Like the gripping, heartrending Russian dramas Leviathan and Loveless, it is a devastating drama that nonetheless pulls us in with remarkable force as it paints a haunting portrait of human longing for respite and peace.