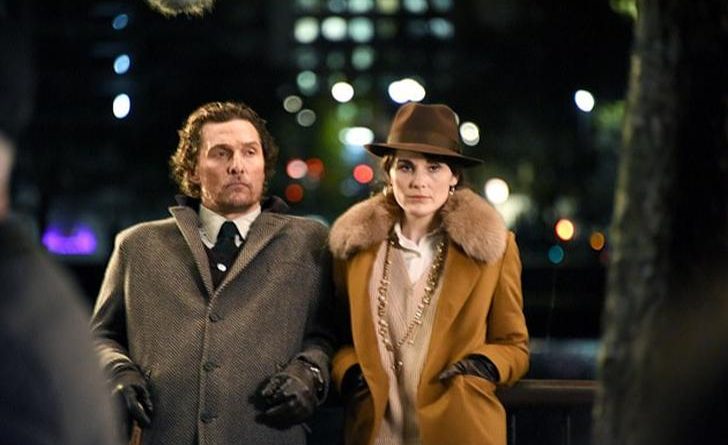 Mickey Pearson is the lord of weed. He has marijuana farms under huts, literally underground, and in his farms, he nurtures Mary Jane. But he wants out. Plenty of people line up to buy the farm–in more ways than one.

Despite the title, there’s not a gentleman in sight, not so’s you’d know — there are more zeroes than heroes. The international business offers negotiators who speak in many accents, from Cockney to cock-eyed, from Brits, Ruskies, and Jews. There are buyers named Dry Eye and Big Dave and Bunny; an Irishman named Coach, a couple of so-called “Mossad crabs,” Brits, Ruskies, and Jews. Some have brains to be blown out, and some with braun are happy to do so, popping guns forbidden in England.

Oh, and there’s a scalawag, a private investigator named Fletcher, played against type by Hugh Grant. Fletcher offers to sell incriminating photographs of a druggie boy falling off a balcony, to Ray, Mickey’s henchman. Played by Charlie Hunnam, Fletcher tries to cover up the crime for Mickey.

Matthew McConaughey plays Mickey, an Okie, born “clever but poor,” but he dwindles in the role half-way through. Colin Farrell surprises as Coach, with a rich, albeit unintelligible, accent. Downton Abbey‘s Michelle Dockery provides a distaff touch as Mickey’s slinky, wily wife.

If the plot of The Gentlemen is dizzying, seeing the gangsta film will not clarify much in writer/director Guy Ritchie’s latest pic. The Gentlemen serves up blood, threats, and Scotch. The C word, considered much less gross in England than America, dominates Richie’s whip-lash dialogue, which is heavily accented and uneducated.

Yes, The Gentlemen, accompanied by Christopher Benstead’s music, is clever with its maps and arrows and computer screens to augment the script-within-a-script. But didn’t we just see a version of this violent bad boy culture in Martin Scorsese’s The Irishman? Aren’t we very weary of seeing mobsters playing in the weeds? Enough.