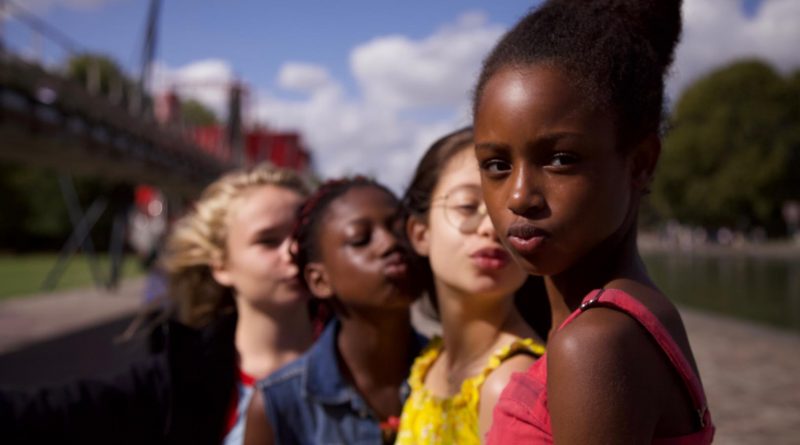 Premiering at Sundance Film Festival 2020, Writer-director Maimouna Doucoure’s Cuties depicts the intersection of budding adolescence, religion, binding generational beliefs, and the courage that it takes to break free from oppressive ideologies that no longer serve the mental and emotional health of women and young girls.

In Cuties, there’s a poignant social commentary on the negative effects of young girls, teenagers and women constantly being bombarded with images and social norms that exalt the over-sexualization of women in the media, on social media platforms as well as in societal and mainstream culture in general. Set in a disenfranchised community in Paris, Cuties touches on an often negated narrative when we think of the luxuries associated with Paris—the working class and the poor.

Freedom and Liberality Without Positive Mentorship Is Dangerous

In Cuties, 11-year old Amy (Fathia Youssouf), a Senegalese immigrant who has just moved into a new Paris neighborhood and has started at a new school comes to learn that when her father who has been away for a long period of time– returns to their conservative, Muslim household, he will be marrying a 2nd wife and bringing her to stay in her own mother’s house. This news could not be more untimely, as Amy is going through puberty, on the brink of experiencing her first menstrual cycle, and in a very vulnerable place of needing to be ‘seen’ and understood. Perceptive, eager to please and in need of feeling validated Amy joins a dance crew at school called ‘’The Cuties’’ who dress suggestively and have—at least in their own minds—taken ownership of what they as preteens perceive freedom to be. The liberated dance troupe literally yell out “Freedom!” in the hallways and in the courtyard of their school as they go along their way—overly confident, young, happy and free–yet sure of nothing.

In their youth and immaturity, they think that they are grown and ready for the world, yet Coumba (Esther Gohourou) one of the loudest and seemingly most confident members of the dance crew does not even know the difference between a condom and a balloon. It’s evident that there’s a sub-narrative present on perceptions of freedom and the consequences that come along with having too much freedom or a skewed perception of what freedom entails. Amy who does not have her own cellphone yet, steals her adult cousin’s cellphone. Her unsupervised use of the cellphone in secret, leads to her being exposed to provocative music videos and content. Amy becomes fixated with the stripper-like dance moves of the grown women in the videos and shares the dance moves with her crew, and eventually takes inappropriate photos of herself on the phone.

Amy’s recognition of her mother’s public acceptance of an ideal that she privately disagrees with serves as a catalyst for the impressionable preteen to shift in behavior towards reckless abandon. Under the direction of Doucoure, the often juxtaposed narratives around religion and liberality are beautifully interwoven in a manner that suggests that society and cultural norms can benefit from both. As a devout Muslim woman, Amy’s mother Mariam chooses to suppress her authentic feelings about the oppressive cultural norms and religious protocol in her life as well as the actions of her husband. The unaddressed pain and emotional residue that stems from these norms settle on Amy and manifest in her embracing behavior and exhibiting characteristics that are not in line with how she was raised, nor do her actions align with her religious beliefs. In one of the most powerful scenes in the movie, Amy has an elevation in her consciousness while literally performing on stage as she is gyrating and twerking in provocative clothing. The scene is gut-wrenching and painful to watch, but very necessary as it truthfully depicts the culmination of misguided anger, growing up too fast, and how the choices that adults make truly affect the next generation.

What Are We Really Teaching Young Girls & Teenagers

The narratives within Cuties raise questions about belief systems, and notions of freedom and liberality. What are we really teaching our daughters, young girls, and teenagers about sex and their bodies? While faith and religion can represent beautiful traditions and create positive cultural legacy, we must also be mindful that some generational patterns are negative and detrimental. As evidenced in the overbearing older, grand-aunt, tradition can be overbearing. Ultimately, it is Amy’s mom who assures her daughter that she loves her no matter what, and allows Amy to make her own decision about whether or not to attend her father’s wedding. In the context of this film, the father’s wedding to a second wife in his current wife’s home represents the oppression of the patriarchy. In the end, Amy chooses not to adorn herself in traditional Senegalese garments for the wedding. After gaining some experience and pressing through some pain she learns that there’s no need to rush life. Now with quiet confidence, she chooses to put on her ‘own’ clothing and goes outside to play. She embraces what it means to be a child, and not yet a woman. She joins a group of children who are jumping rope, and she’s okay with that.

Newcomer Youssouf has that something special that makes her really memorable. Her face carries a vulnerability that draws you in. The cinematography of Yann Maritaud beautifully contrasts vibrant shades of royal blue, red, and warm shades of orange with the pastel shades used to curate the interior of the home that Amy lives in. The cinematography captures light in exquisite ways. The use of color and lighting illuminate Amy’s face in the opening scene, and it sets the tone for the cinematography of the film throughout.

While the movie centers on Amy, a brown-skinned beauty with thick, natural hair, the entire cast is fearless in their portrayal of their characters. The dance crew includes Angelica (Medina El Aidi-Azouni), a fair-skinned Latinx girl who is vivacious, who exudes a tough exterior, but has a heart of gold, and has fully embraced her role as leader of the pact—eyeglasses and all. Coumba, the loud-mouthed flirt of the group rocks fun hair and braids with funky colors. She wears the demeanor of a know-it-all, but in actuality her bark is a lot louder than her bite. Then there’s Jess (Ilanah Cami-Goursolas) with white skin, bone-straight tresses and the heart of a freedom fighter ready and willing to fight for one of her girls. Then there’s Yasmine (Myriam Hamma), full-figured, tenacious and beautiful. Yet, I’m not quite sure if she knows it. The girls cast in this film were all the perfect complement to one another on-screen. It was refreshing to see such vulnerability, honesty and fearlessness pour out of them in each scene. Their genuine youthfulness made you want to empathize with their characters immediately.

Doucoure’s Cuties illustrates what can happen when social norms, religious beliefs, and the moral fabric of a society become imbalanced. When truths are hidden in a family and there’s no accountability in society, the the social and emotional results often settle on the children.

Cuties premiered at the Sundance Film Festival on January 23, 2020. Netflix has purchased the rights to Cuties. The running time is 1 hour 35 minutes. The film is in French with English subtitles.