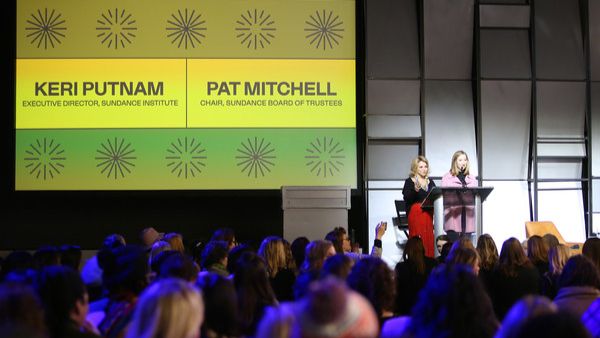 Have you ever sat 10 feet from a couch being shared by Hillary Rodham Clinton and Gloria Steinem? I have. In fact, I just did. It happened at the Women of Sundance Celebration at the Sundance Film Festival, and it is a bit like a religious experience. So is sitting in a venue with over a hundred of the most talented female filmmakers and creators in the world. It was the culmination of a weekend full of spectacular events and awards-worthy films directed by, written for, and celebrating diverse, brilliant, inspired women.

Every year, Sundance Film Festival features a gathering in which there are speakers, performances, and interviews of women who are participating in the festival, and this year, since Sundance had the highest percentage of female creators represented in their program to date, the event was inspiring from beginning to end.

Throughout this past weekend, of the many films that premiered, I’d watched only those that were directed by women. That was a decision I’d made for myself — that is to say, my editor at the Alliance of Women Film Journalist didn’t ask that of me, it was my personal desire.

My three very favorite films so far have been Crip Camp (co-directed by Nicole Newnham and James Lebrecht), The Glorias (directed by Julie Taymor), and The Forty Year Old Version (written, directed, and starring Radha Blank). My reviews of these films will post later. \The directors of all three films were at the Women at Sundance Celebration, and in fact Julie Taymor was sitting one seat away from me.

The event began with Sundance Institute CEO and Executive Director Keri Putnam and Sundance Board of Trustees chair Pat Mitchell welcoming all of us the the gathering. After thanking the fest’s spomsors and supporters, they asked all the female filmmakers to stand up. To see that many recognizable, well-respected women directors in one place was really impressive, and nearly overwhelming. For those of us who amplify their work, it really brings home how many talented women are out there creating great art.

As part of the ceremony, Radha Blank rapped from several of the songs she performs in her film. The entire audience was laughing and many of us were relating to her lyrics, which come from the perspective of an older, in this case, Black, woman. For women over a certain age, (say, 40) many of her rhymes rang very true. This was just one moment of many where everyone in the audience felt very in accord and in sync with each other.

Amy Emmerich, global president and chief content officer of Refinery 29, expressed her appreciation for the brave women of the documentary On the Record, and the women of Planned Parenthood, who have a strong presence at the fest. She spoke about how she felt shaky, and realized it was because “we have been conditioned over centuries to believe that we don’t deserve to be in the company of real power.”

‘Poet of code’ Joy Buolamwini, who is a digital activist and the subject of the movie Coded Bias, explained some of the ways AI is actually structured in such a way as to diminish women of color, and about the need to be aware and astute about how data is being gathered. She asked us to question how we can better structure our digital future to our benefit, to bring us together rather than to further categorize us, or worse, erase us. 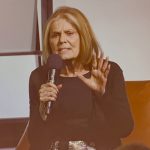 Gloria Steinem was interviewed by The New York Times Op-ed Writer and Editor Aisha Harris. When asked about the film The Glorias, and about being portrayed on screen, Steinem said, “I have faith in each of us telling our stories, in whatever way we can, because that is the way we discover we are not alone, and someone else had the same experience. It’s our version of sitting around a campfire, which we’ve been doing since time immemorial, and I think we truly miss that in a time when we are all looking at our screens, because you don’t produce the famous oxytocin that allows you to empathize, on a screen. We have to be together to experience all the 5 senses. What you are doing here, as filmmakers, what Julie did with my book that brings us together to watch it, is the current campfire, and without it we can’t empathize with each other.”

Activist, actor, director Eva Longoria, spoke to the theme of the fest:‘imagined futures.’ She related her experience as a child growing up in Texas, getting on a school bus with a bean taco her mom made her every morning, and seeing all the other kids with Pop Tarts. She wanted to be like everyone else. She said maybe if more TV and movies had better representation of Latinx folks, maybe some white kids would want a bean taco. She imagines a future in which her own child will be able to see herself onscreen in a way that celebrates her. Lots of people were very moved by her impassioned speech. 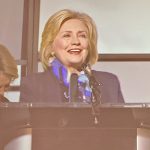 Hillary Clinton was the last speaker to go onstage, and was greeted with thunderous applause. She is the subject of director Nan Burstein’s new documentary series for Hulu. Clinton was interviewed for about 35 hours for the series, which premiered this past weekend. The series is about more than just Clinton’s life, but about the lives of women and the changes that happened during the course of her life, both in the women’s movement and in politics. Clinton said, “There’s a saying you might have heard that says ‘culture eats policy and politics for breakfast.’ That’s because culture drives how we think of ourselves, how we think of each other, and how we imagine a future, not only personally but collectively. It won’t surprise you to hear me say we are in the midst of quite a contentious cultural moment. There is nothing more important than telling stories that not only lift up and describe the diverse, extraordinary lives that you represent, but you also are introducing the rest of us to, but to recognize that what you are doing is so fundamentally political at this moment. When you turn to a screen you don’t see stories that are uplifting, you see stories that bring us all down. I cannot stress enough that those of you in this room that are the creators and the makers and truth tellers, we need you now more than ever, and the diversity that you represent is one of our strongest assets in trying to take back the story that we should be telling ourselves, and our children, about not only who we are, but who we want to be.”

The Women at Sundance Celebration will be one of the highlights of my festival. I’m sure that’s true for many of those who attended it. It highlighted not only the work of two American icons, it celebrated new voices of all ages, backgrounds, and cultures, and it did so in the spirit of collaboration and cooperation. That is the essence of the female gaze.