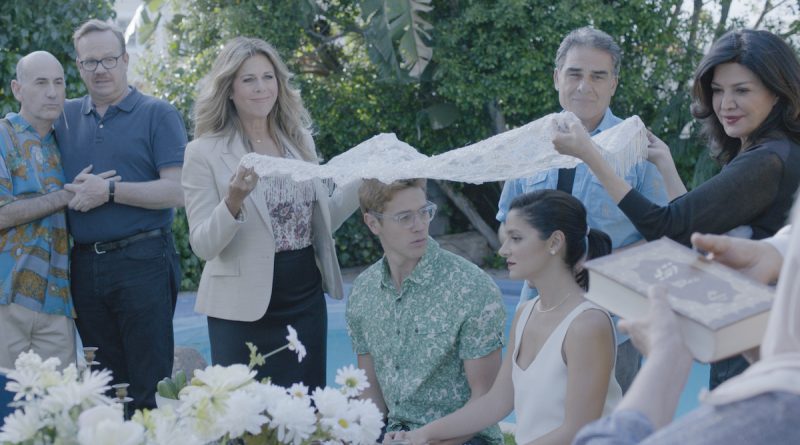 If you were to blend My Big Fat Greek Wedding with The Big Sick — and add a dash of Crazy Rich Asians — you might end up with something close to A Simple Wedding, Sara Zandieh‘s entertaining romcom about a thirtysomething Iranian American woman who wants to find love on her own terms. 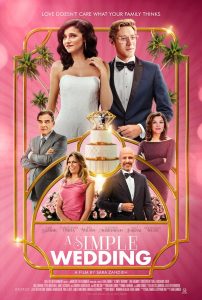 Nousha (Tara Grammy) is a smart, successful single L.A. woman with close friends, a healthy career, and no shortage of independent spirit. Her parents (Shohreh Aghdashloo and Houshang Touzie) are desperate for her to marry a fellow Iranian from a good family, but Nousha torpedoes every match they try to arrange for her. Then she meets Alex (Christopher O’Shea), an unconventional, bisexual, staunchly feminist artist … who also happens to be white.

They fall madly in love, but Nousha balks at introducing him to her parents, fearing the inevitable backlash that their cross-cultural pairing will inspire. Eventually the truth comes out; there’s yelling, but there’s also the fact that her parents really just want Nousha married — even if it’s to Alex. Whirlwind preparations commence, but will the walk down the aisle have a happy ending?

Credit goes to writer/director Zandieh for making the twists and turns of Nousha and Alex’s relationship at least somewhat unpredictable; for a romcom, that’s a huge accomplishment. It’s also refreshing to have a main character who’s more than just her neuroses. Sure, Nousha has commitment issues to work out, but she’s not a quivering wreck of a person just because her love life is complicated. She gets up, she sees friends, she does her job well — she’s a well-rounded character.

The film smashes stereotypes in other ways, too. The supporting characters are a diverse bunch, and they represent a range of backgrounds and lifestyles. Rita Wilson (who, like Aghdashloo, also executive produced — the same as she did for My Big Fat Greek Wedding back in 2002) charms as Alex’s divorced mom; her subplot romance with Nousha’s Uncle Saman (Maz Jobrani) practically begs for its own movie. A Simple Wedding doesn’t escape all romcom cliches, but, after all, aren’t some of those tropes part of the reason we watch romcoms in the first place? In the end, it’s a funny, sweet story about overcoming the obstacles impeding your way to happiness, and that’s something we can all appreciate. — Betsy Bozdech

MaryAnn Johanson Sara Zandieh’s thoroughly charming feature debut is bound to be compared to My Big Fat Greek Wedding… and while of course this delightful film deserves to stand on its own, that comparison is no bad thing: both movies are full of life, celebrating human universals of family and love, and embracing the differences that make the world so interesting and so much fun. It’s a wonderful reminder, much needed in our angry, insular times, that the melting pot is one of the best aspects of American culture… and it would be amazing if this movie could be as successful as that earlier one, especially now. The movie’s feminist chops are terrific, too, as Tara Grammy’s Nousha drives herself a little crazy trying to balance what she wants and needs out of romance with what her more conservative parents, and the different world they come from, imagine for her. Bucking expectations is never easy… Read full review.

Leslie Combemale Let’s be honest. There’s really no such thing as a simple wedding. Writer/director Sara Zandieh drives this home in her new rom-com A Simple Wedding, starring the gorgeous and hilarious Tara Grammy. I love seeing films by women that center on women coming from or representing other cultures. It brings me such joy to see an American comedy about an Iranian-American woman, with Iranian co-stars. Even better is having an intergenerational story with three Iranian women, especially when one is learning to balance both American and Iranian cultures in her own life. A Simple Wedding is a wonderful peek into one Iranian family’s experience choosing to live with varying degrees of assimilation while celebrating their own cultural traditions. Read full review.

Pam Grady: Writer/director Sara Zandieh’s debut feature is a buoyant romantic comedy that derives laughs, pathos and tension from the predicament of an Iranian American woman caught between her conservative immigrant parents’ expectations and her own desires. There is nothing simple about the upcoming marriage between Nousha (Tara Grammy) and her artist/DJ boyfriend Alex (Christopher O’Shea), not when the engagement is simply to keep the peace. Zandieh and her co-screenwriter Stephanie Wu balance big laughs with genuine heart as they limn Nousha’s predicament. Grammy and O’Shea deliver winning performances as a couple trying to navigate a cultural minefield. A subplot involving Nousha’s Iranian army veteran uncle (Maz Jobrani) and Alex’s long-divorced mother (a radiant Rita Wilson) adds a further sprinkling of romantic stardust in this genial love story.

Jennifer Merin Sara Zandieh’s entertaining first feature, A Simple Wedding, successfully sacks sterotypes and marries rom com to cultual conflict. Nousha (Tara Grammy), a smart and sassy 30-something Iranian woman is dead set against any of the arranged marriages her mother (Shohreh Aghdashloo) proposes. But she immediately sparks to Alex (Christopher O’Shea), a gender-bending artist whom she encounters accidentally at a menstrual rights rally she’s attending with gal pals. BOOM! Nousha and Alex are in love. Their relationship has predictable cross-cultural problems, but all of the issues are dealt with in a uniquely goofy, eccentric and sincere manner that is, ultimately, an enchantingly sweet ceremony, a string of giggles and guffaws that boost tolerance, understanding and love.

Loren King Sara Zandieh’s A Simple Wedding is a likable generation-clash comedy about a modern young woman Nousha (Tara Grammy) and her traditional Iranian parents who are eager for her to get married. The pressure pushes Nousha into rushed nuptials with sweet hipster boyfriend Alex (Christopher O’Shea). The situations are rendered in broad strokes rather than the delicate touch of recent movies with cross-cutural storylines including The Farewell and Blinded by the Light. But it’s the presence of two veteran actresses — Shohreh Aghdashloo (House of Sand and Fog) and Rita Wilson — who steal the movie from the youngsters. The luminous Wilson, in particular, is a joy to watch as Alex’s mom who’s given up on romance but who blossoms when she finds it in an unexpected place.

Liz Whittemore Writer-director Sara Zandieh has given us a cross-cultural gem of a film. Down-to-earth and hilarious dialogue mixed with incredibly genuine performances from the entire cast make A Simple Wedding a pure delight. It’s a story that tackles generational and cultural differences but highlights the ability to grow and learn from one another. Simply shot, the audience can focus on the writing. Congratulations to both Zandieh and co-writer Stephanie Wu for being bold and completely accessible for a 2020 audience.

Sheila Roberts Love finds you when you least expect it in Sara Zandieh’s hilarious feature debut, A Simple Wedding, inspired by Hafez, Persia’s celebrated 14th century poet known for his lyrical writings about the joys of wine and romance. Zandieh directs from a well-crafted script she co-wrote with Stephanie Wu that melds romantic comedy with cultural conflict to reveal how love, tolerance, trust and understanding can transcend cultural differences, gender bending stereotypes, old grudges, and misguided assumptions about each other. Read full review.

Marina Antunes Straddling family responsibility and being true to oneself isn’t always easy. Sara Zandieh’s A Simple Wedding follows in the footsteps of My Big Fat Greek Wedding by taking a lighthearted romantic comedy approach to tackling the sometimes complicated path to love in the face of cultural expectations.

Nell Minow: A fresh and funny rom-com for the 21st century with insightful details on what’s different about falling in love today and some wise understanding about what’s eternal about being in love any time.

Sandie Angulo Chen: A Simple Wedding is a feel-good intercultural rom-com about Nousha (Tara Grammy) an Iranian American young woman from the well-heeled, traditional Persian community of Orange County, and Alex (Christopher O’Shea), a bisexual white boy with a mom and two dads. Parts of the story are familiar comedy tropes – two very different families being thrust together for a wedding, for example, but director Sara Zandieh’s film manages to throw in enough twists to keep it relevant. Grammy (who should star in her own sitcom) and O’Shea have good chemistry, and the supporting actors, especially Shoreh Aghdashloo and Rita Wilson (as the two mothers), as well as Maz Jobrani as Nousha’s uncle, add to the humor and heart. This should make for an ideal Valentine’s Day-timed romance.