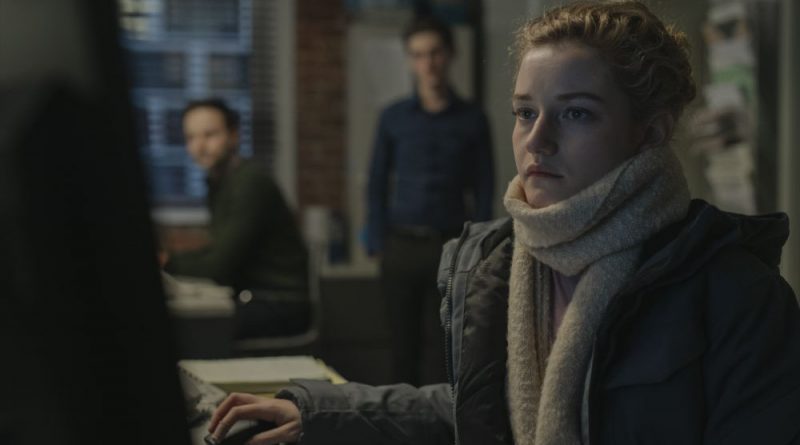 A polite command, “Show her in,” takes on a chilling connotation in award-winning Australian filmmaker Kitty Green’s riveting dramatic feature debut, The Assistant. Green takes a savage look at a typical day in the life of an aspiring, competent and well-educated junior assistant who has just landed a promising position working for a powerful entertainment industry executive. The story is inspired in part by the #MeToo investigation into workplace sexual abuse allegations by movie mogul Harvey Weinstein and others that have been chronicled in the media over the past three years, and most recently in Ronan Farrow’s bestselling novel, Catch and Kill, and podcasts.

At first glance, Jane’s (Julia Garner) daily, entry-level duties seem routine, although it’s clear her days begin early and weekend work is required. We see her arriving first to the office, making coffee, answering her boss’s phones, opening his mail, arranging travel, paying bills, ordering lunch, washing dishes, photocopying and assembling scripts. Her dream job, however, takes a dark turn when she tidies up her boss’s office after a meeting, sees the need to disinfect his couch, and discovers a stray earring on the floor which she discretely returns to its embarrassed owner. Next, her more experienced male colleagues, who know better than to field a phone call from the boss’s angry wife, force her to deal with the woman’s complaints about credit cards and his whereabouts. Jane’s suspicions grow when she is asked to pay dubious bills for non-descript services and sees a company lawyer meeting with a young woman to sign a non-disclosure agreement.

When Jane tracks down her boss’s whereabouts after he misses a critical meeting, then is asked to onboard an attractive new hire who clearly isn’t qualified, she quickly realizes what her co-workers already know. It’s an open secret her boss is an infamous predator who uses fear and intimidation to ensure a conspiracy of silence. He coerces everyone to do his bidding and thereby protect his image and interests. Jane may be young and still learning, but she’s also smart, tough and resourceful. We can see it etched in her face and in the professional demeanor she struggles to maintain in a sick and stressful environment. She decides to report her concerns to Human Resources, only to discover that if she hopes to keep her job, she’d better learn not to say anything. The worst moment of her interminable day is when a more experienced female co-worker recognizes her disillusionment and callously reassures her she has nothing to worry about because “she’s not his type.”

Veteran casting director Avy Kaufman makes superb choices — from Julia Garner who turns in a perfectly calibrated performance in the lead role; to Matthew Macfadyen as the firm’s complicit personnel director; to Jon Orsini and Noah Robbins as Jane’s patronizing co-workers who share her office space, take perverse pleasure in watching to see if she’ll fail, then help her compose email apologies to her abusive boss to save her job; to Stephanye Dussud as the betrayed wife; and finally to Makenzie Leigh, Kristine Froseth, Juliana Canfield, Dagmara Dominczyk, Bregje Heinen, and Clara Wong as gorgeous young women who audition on the boss’s casting couch hoping to advance their careers. The filmmakers make an interesting creative choice to never show the boss whose voice is only overheard when he berates Jane over the phone.

Green delivers a timely, gripping tale of exploitation and insidious abuse in an economical 87 minutes. The film is expertly lensed by DP Michael Latham who quietly observes and captures every sordid detail in Jane’s degrading workday existence, using tight close-ups to reveal the subtle emotional reactions that play across her poker face as one disturbing event unfolds after another. The film is tautly paced and skillfully edited by Green and Blair McClendon. In the end, an exhausted, demoralized Jane must decide how much her aspirations to become a respected producer are worth the daily degradation. This is an engrossing film that has a lot to say about workplace exploitation, gender discrimination and inequality. It’s one you won’t want to miss.