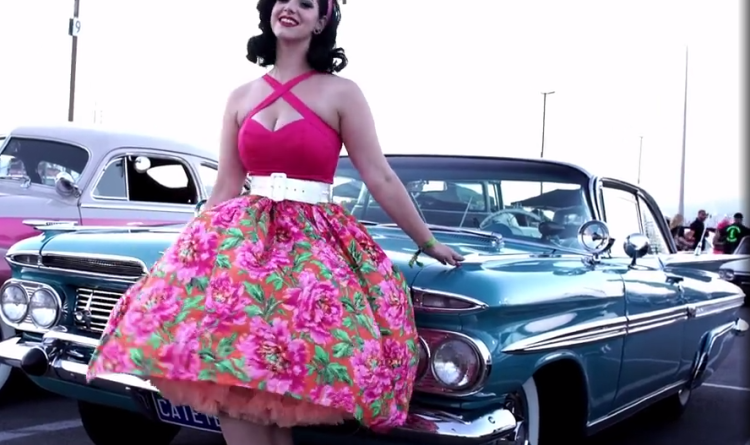 “Bombshell” movies come in all shapes and sizes.

Subtitled The Story of 12 Pinups, it focuses on Angie Honeyburst, Miss Victory Violet, Dixie Delight and other contenders for the coveted title of Miss Viva Las Vegas Pinup.

The annual pageant is a fixture at the Viva Las Vegas Rockabilly Weekend, which draws 25,000 people to the off-Strip Orleans hotel-casino to celebrate the music, cars and styles of the mid-20th century.

“This is like the Oscars to pinup girls,” explains Marilia Skraba, a Brazilian ballerina competing with cuties from Australia and New Zealand, South Africa, Canada and across America.

Bombshells and Dollies offers a behind-the-scenes glimpse of how contestants create their looks, from vintage clothes (gleaming sequins, poufy petticoats) to cat-eye makeup and pin-curl coiffures.

As pageant contestants and coordinators emphasize, however, there’s more to being a pinup than the retro look.

It’s “the energy that you give out to the people — and the love you give back to the community,” comments Sharon Escamilla of Los Angeles, alias Pinup Little Bit.

It’s also about creating a positive persona, often in response to negative feedback from society at large.

“Pinup and vintage helped me embrace my figure,” notes Victory Violet, an Australian who had an eating disorder before becoming a body confidence blogger.

South Africa’s Gabbi Katz (nom de pinup: The Blue-Haired Betty) morphed from a goth girl and admits, “for the first time in my life, I absolutely love the reflection I see in the mirror every day.”

It’s no accident that this tribute to flamboyant glamour takes place in Las Vegas, where “everything is fake, but it’s fantasy,” notes Rockabilly Weekend founder Tom Ingram. “There’s nowhere else like it.” (Not even in Las Vegas; some of the documentary’s stock footage depicts long-gone casino landmarks.)

Throughout Bombshells and Dollies, writer-director Dan Halperin employs a straightforward, talking-heads approach. (Among the numerous interview subjects: burlesque star Dita Von Teese, who shares her own journey from bashful to bombshell.)

Then again, anything flashier might compete with, and distract from, the eye-popping exteriors — and often poignant personal reflections — of the bombshells themselves.