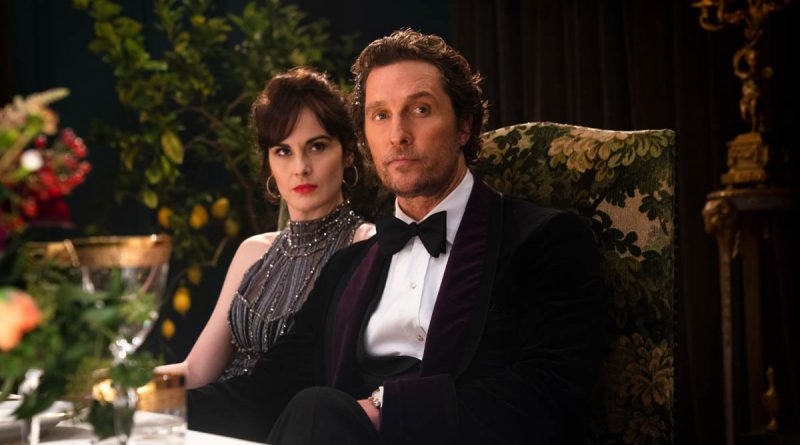 Sporting a goatee, thick-rimmed glasses and a campy Cockney accent, Fletcher (Hugh Grant) is a smarmy private investigator who specializes in digging up dirt about the filthy rich. As the narrative evolves, he pays a late night visit to Raymond (Charlie Hunnam), right-hand man to American expat Mickey Pearson (Matthew McConaughey).

While studying at Oxford, enterprising Mickey made money as a drug dealer to impoverished British aristocrats who agreed to hid his cannabis plantations on their country estates.

But a bold raid on one of Mickey’s hidden weed sites by social-media savvy thugs called the Toddlers ignites a chain of retaliations, as the Toddlers report to a tartan track-suited mentor/boxing Coach (Colin Farrell).

What smirking Mickey, sporting a sparkly ear stud, wants is to retire rich and enjoy the rest of his life with his street-smart wife Rosalind (Michelle Dockery).

“If you want to be the king of the jungle, it’s not enough to act like the king – you just be the king,” he declares in a voiceover.

Writer/director Ritchie concocts a complicated, contrived, often confusing plot that’s filled with bloody bickering and betrayal, augmented by clever twists, along with a total disregard for political correctness, since one character is offensively referred to as “the Chinaman” while another is “the Jew.”

On the Granger Movie Gauge of 1 to 10, “The Gentlemen” is a slick 7, a fast-paced romp for die-hard Richie fans.