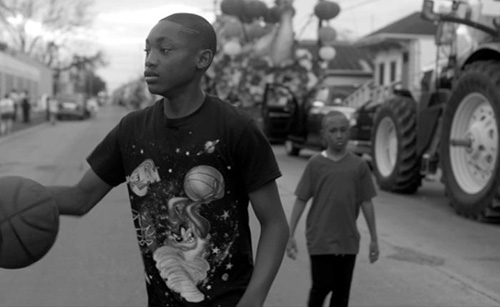 One question sparks multiple stories, and even more questions — but precious few answers — in What You Gonna Do When the World’s on Fire?

The latest slice of U.S. life from Italian-born Roberto Minervini (The Other Side, Stop the Pounding Heart), this award-winning documentary focuses on a variety of African-Americans, primarily in New Orleans, attempting to deal with the gnawing, inescapable knowledge that racism is not only alive but thriving in Trump-era America.

The documentary, shot in 2017 in all-too-symbolic black and white, interweaves three central storylines.

One involves the indomitable Judy Hill, a 50-something bar owner who’s faced challenges within (a painful history of drug use and sexual abuse) and without (her New Orleans neighborhood’s looming gentrification).

Despite her emotional baggage, Judy tries to share the life lessons she’s learned with everyone from her 87-year-old mother (who still does laundry in a bucket) to her troubled cousin, whom she encourages with the hard-won knowledge that “the only way you can succeed in life” is to “do good.”

A second strand follows members of the New Black Panther Party for Self-Defense — led by stalwart national chairwoman Krystal Muhammad — as they pass out sandwiches to the homeless, plot strategy to battle inequality and protest killings in Louisiana and Mississippi, some of which are perpetrated by the police, others by a resurgent Ku Klux Klan.

Most affecting, however, are brothers (really half-brothers) Ronaldo, 14, and Titus, 9, as they explore the boundaries of their world. Whether they’re watching a passing freight train or riding rickety, light-bedecked bicycles, the challenges of simply surviving seem everywhere. At one point, Ronaldo explains the difference between color and race to Titus, who doesn’t quite understand. (How could he?) At another, Ronaldo gives Titus some rudimentary boxing lessons “to protect yourself,” but warns, “nowadays, people don’t fight. They like to shoot.”

Intermittently, scenes involving the Mardi Gras Indians — preparing for and participating in New Orleans’ annual festivities — provide a welcome reminder of the community’s traditions and resilience.

Yet, despite its numerous compelling sequences, What You Gonna Do When the World’s On Fire? never quite transcends its patchwork structure.

Minervini’s fly-on-the-wall approach studiously avoids any kind of background information or orientation. Plunging audiences into the midst of the action, he forces us to wonder and ponder as his camera records — and reveals.