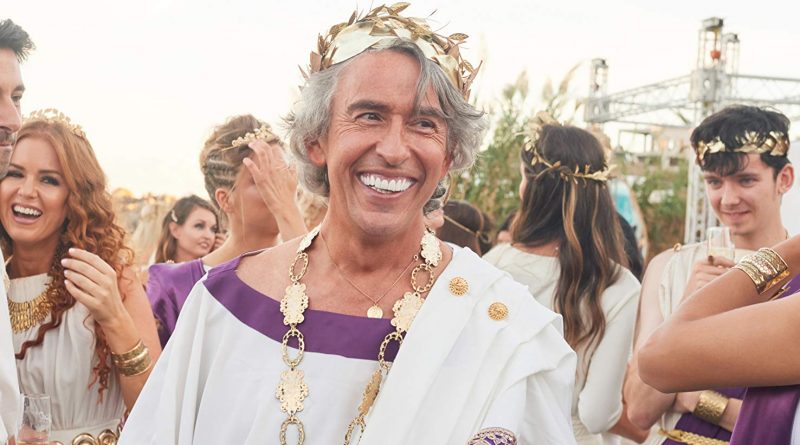 Based on the lavish life and crimes of taste, decorum and common decency of UK cheap-fashion mogul Philip Green, whose low-rent boutiques catered to the young and trendy, Michael Winterbottom’s Greed–a breezy chronicle of bad behavior by the rich and notorious–is either a cautionary tale or an exhortation to just do it, depending on which way your moral compass points.

The film opens with Sir Richard “Greedy” McCreadie (Steve Coogan) testifying before a Parliamentary committee about his financial doings, but it is dominated by the weeks-earlier preparations for his 60th birthday party in Mykonos, which is worthy of a Roman emperor’s bacchanal (okay, Mykonos is in Greece… but hey, it’s notoriously welcoming to hedonists and if you have enough money to throw at the project you can build your own coliseum anywhere).

Yes, it’s a monumental toga party, and not the kind featuring frat boys draped in bedsheets. The guest list includes everyone-who’s-anyone and there’s even a lion named Clarence (I’d like to think that’s a little shout out to the 1960s TV series Daktari, though this Clarence does not appear to be cross-eyed–Daktari’s big cat star had his own billing as “Clarence the Cross-Eyed Lion”); just understandably annoyed at being surrounded by cage-rattling drunks and jerks. Clarence is there to fake-menace some fake gladiator in the fake coliseum for the entertainment of McCreadie’s guests, though McCreadie’s perpetually pissed-off son (Asa Butterfield) points out that in Gladiator–his dad’s favorite movie—it was a tiger, not a lion. And McCreadie’s daughter is there with a reality TV show (The Young, the Rich and the Beautiful) crew in tow, recording her vapid Kardashian-esque travails.

Also on hand is McCreadie’s biographer, a journalist on his uppers trying to convince himself that he’s doing some kind of reporting here, not just hacking his way through a book-length puff piece to feed the ego of a 21st-century robber baron willing to bully, buy, undercut, pay off or ruin everyone who stands between him and what he wants. Given the number of moving parts—party planners, caterers, a construction crew, family squabbling, video cameras, sundry sexcapades, celebrity wrangling and yes, that lion—it’s no surprise that the event does not go off as smoothly as intended, in part because of the sheer hubris of its scope. The Greek gods didn’t care for hubris, and McCreadie and his friends, family and enablers define the term. While the story is played for viciously understated farce its appeal is largely in the voyeuristic appeal of seeing 50 shades of awful people get at least a taste of what they deserve, almost entirely at their own hands.

I suspect Greed resonates more deeply with UK audiences than it will with those in the US because its narrative is deeply intertwined with class distinctions that just doesn’t play in the US today—for that matter it doesn’t resonate as powerfully in the UK as it once did but is still woven into the fabric of their culture. On this side of the ocean even the moral dilemmas of The Great Gatsby are a hard sell in an age when the term “short-fingered vulgarian” no longer registers as a condemnation of character and the win-at-all-costs amorality of Sammy Glick is just good business, which is, of course, the business of America.

The arc of McCreadie’s rise and fall is a circus of shamelessness America has embraced since movie magazines celebrated the mansions, yachts, custom-built swimming pools and couture wardrobes of glittering stars just a few years removed from anonymous ordinariness by good looks and tough hides and moguls unafraid to grab the brass ring. McCreadie and company prospered as his core businesses—built on cheap labor in third-world countries producing disposable goods that generated profits shoveled into complicated financial schemes of the kind that require visual aids to explain and favor the first in/first out—collapsed… but only after he’d taken his share.

It’s a wild ride, written and directed by Michael Winterbottom—whose films have dealt equally with hedonistic subcultures and politically-pointed issues– beautifully photographed and as shiny as Coogan-McCreadie’s teeth, perfectly regular tombstones sufficiently dazzling to blind the unwary. And to its credit, Greed never loses sight—nor allows the viewer to do so—of the fact that McCreadie was a showman whose razzle-dazzle was cynically toxic, invested in Potemkin villages of the mind.