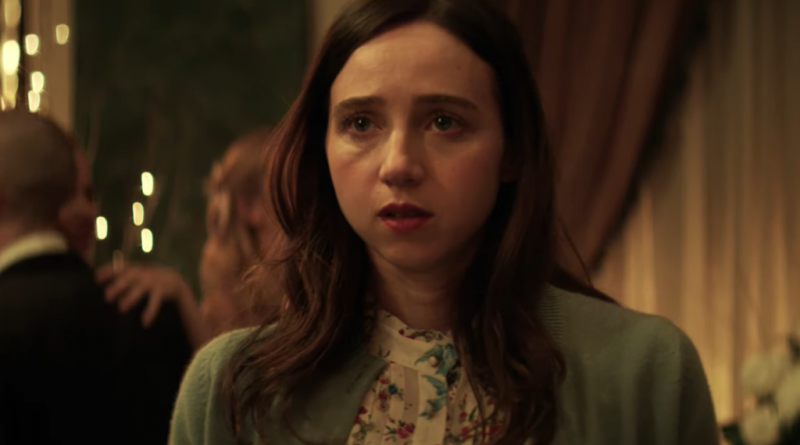 Help comes from unexpected places when needed the most in The Kindness of Strangers, Lone Scherfig’s heartfelt drama about a handful of people whose lives intersect amid the bustling anonymity of New York City. Centering on the plight of a woman who flees an abusive marriage with her two young sons, the narrative shows how circumstances — and life itself — can turn on a dime. 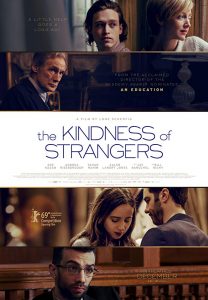 Clara (Zoe Kazan) knows she has to get her boys away from their father, Richard (Esben Smed), so she sneaks them out early one morning and takes them to Manhattan on “vacation.” But it quickly becomes apparent to them (as well as to viewers) that Clara doesn’t really have a plan — or any resources to fall back on. Richard’s father is no help, and she’s afraid to contact the authorities, since Richard is a cop. Thankfully, she eventually crosses paths with Alice (Andrea Riseborough), an ER nurse/church volunteer who works with those in need, and Marc (Tahar Rahim), a prickly restaurant owner who doesn’t want to get close to anyone but is swayed by Clara’s vulnerability and precarious situation.

Rounding out the ensemble of characters are Jeff (Caleb Landry Jones), who means well but seems cursed by bad luck and a lack of attention to detail; John Peter (Jay Baruchel), Marc’s lawyer and the closest thing he has to a friend; and Timofey (Bill Nighy), who works with Marc at his restaurant and knows how to be discreet. As Clara and her boys brush through all of their lives, they find themselves changing, however subtly — they’re more honest with themselves and with each other, they’re open to new connections, and they recognize the value of reaching out to people who need help.

Scherfig, who also wrote the film’s compelling script, elicits strong and affecting performances from her actors. Kazan is heartbreaking as a loving mother who will do anything to save her kids but has no idea where to turn for assistance, and Riseborough is simultaneously tough and tender as Alice, who’s seen everything in the ER but still isn’t immune to tragedy and pain. With its poignant story, The Kindness of Strangers serves as a strong argument for the importance of really seeing those around us and opening our hearts to them. — Betsy Bozdech

Leslie Combemale Writer/director Lone Scherfig and a great cast fronted by Zoe Kazan speak to the importance of empathy and forgiveness at the core of new indie The Kindness of Strangers, in moving and powerful ways. The film’s likely to cause tiny fissures in the hearts of those who watch it, but the depth of the character arcs make those little breaks worth it. The trajectories of a battered wife (Kazan) on the run with her kids, a nurse (Andrea Riseborough)losing her faith in humanity, a lost soul (Caleb Landry Jones), an ex-con (Tahar Rahim) and his world-weary lawyer friend (Jay Baruchel), and others, all collide during a particularly harsh New York City winter. As an ensemble, you can’t do better than that list of performers, unless you add Bill Nighy as a compassionate but nonplussed restaurateur, a role with which he, as expected, brings the whole story together. These characters stumble through their personal tragedies towards each other, and the resulting interactions are healing to both those onscreen, and those watching the film.

Nell Minow: Zoe Kazan gives a luminous performance in a story about the transformative impact of kindness and forgiveness, both on those who receive and those who give. Lone Scherfig’s characters are often flawed, sometimes mistaken, but always human and worth rooting for.

Jennifer Merin In The Kindness of Strangers, writer//director Lone Scherfig’s weaves a rambling narrative comprised of the strands of the disparate lives of several desperate and disconnected characters who randomly intersect as they struggle for survival and meaning in the unsympathetic environment that is Manhattan. Zoe Kazan plays the mother who has fled from Buffalo with her two young sons to escape the violent abuse of her police officer husband. As a character with nothing but need, she becomes the pivotal person in the plot, eliciting and depending upon the resources and essential kindness of the other characters — a nurse, lawyer and restaurateur, among others. Set in a gritty assemblage of NYC locations, evolving at a slow and deliberate pace and progressing with a story line of unlikely coincidental events, the film presents as a hope-filled fantasy with a dash of social commentary about how the fundamental human characteristic of kindness can quell the prevailing sense of loneliness and isolation that dominates our modern day urban lifestyle. The Kindness of Strangers isn’t an easy to watch film with a neat and tidy plot that you can easily forget. Instead, the implausible aspects of the story call for contemplation about the need for kindness in our lives.

Sandie Angulo Chen: The Kindness of Strangers is one of those films where an ensemble of outstanding international actors play characters who are strangers but whose lives eventually intersect in overlapping ways. But unlike a feel-good holiday- or faith-based themed film, this one centers around loneliness, pain, and forgiveness. Zoe Kazan and Andrea Riseborough – both brilliant actors – give standout performances as Clara, a young wife and mother who’s the survivor of domestic abuse (at the hands of a police officer husband, just to make her escape more complicated), and Alice, a trauma nurse by day and group-therapy facilitator by night who manages to connect all the characters. Tahar Rahim, Bill Nighy, Jay Baruchel also co-star in supporting roles. While the movie’s set throughout New York City, there’s a nearly magical Russian restaurant where all the characters congregate (to eat, steal food, hang out, even squat). This isn’t my favorite Lone Scherfig drama (that remains An Education), but she still knows how to draw out nuanced performances.

Cate Marquis Audiences who like neat, tidy narratives might not like this film but its big-hearted sympathy for people on the margins of society and hope-filled belief in the power of kindness will win others over to The Kindness of Strangers. Read full review.

Sheila Roberts Written and directed by Lone Scherfig, the New York City drama features an impressive ensemble cast that includes Zoe Kazan, Andrea Riseborough, Bill Nighy, Caleb Landry Jones, Jay Baruchel and Tahar Rahim. Scherfig attempts to write an authentic story that will resonate with audiences, including those that may have never experienced such bleak situations in their own lives. Read full review.

Susan Wloszczyna: The Kindness of Strangers‘ capable cast of actors is topped by Zoe Kazan as Clara, a young mother who runs away from Buffalo to New York City to save her sons from their father, an abusive cop who gets off on violence. With little means to support herself and no safe haven that she can afford for her kids save for libraries, she does what the title says – she reaches out to average citizens who just happen to be do-gooders. Read full review.

Loren King Director Lone Scherfig has made some memorable movies: Italian For Beginners (2000); An Education (2009); and Their Finest (2016). I even liked the disturbing but imminently watchable The Riot Club (2014). Her latest The Kindness of Strangers is an ensemble drama with solid performances from Zoe Kazan as a young mother fleeing an abusive marriage and Andrea Riseborough as an overworked nurse whose goodness is stretched thin. But the film is relentlessly downbeat as we follow these and other troubled characters as they navigate New York City with some pat and predictable outcomes. The movie is well intended and has some engaging moments thanks to Kazan, Riseborough and the reliable Bill Nighy (who co-starred in Their Finest) as an aging restaurateur. But the glum, disparate stories never gel into a satisfying whole. Scherfig is entitled to a misfire when she’s a filmmaker of skill and sensitivity; I’m looking forward to what she does next.

Title: The Kindness of Strangers