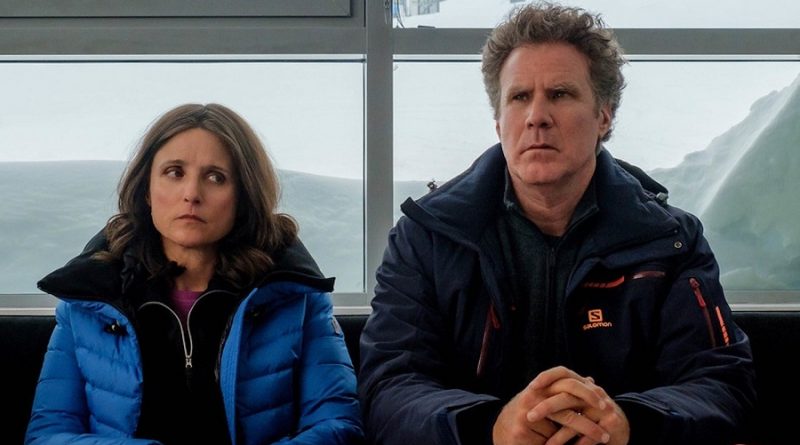 During the hostless chaos of the Feb. 9 Academy Awards, the presenter pairing of Will Ferrell and Julia Louis-Dreyfus provided a hilarious highlight, with the beloved performers using their wit and timing to transform dubious content into comedy gold.

Knowing just how funny they can be together makes their largely laugh-free pairing in the dark comedy Downhill even more of a drag.

A remake of the award-winning 2014 Swedish film Force Majeure, Downhill stars the pair as Pete and Billie, a middle-aged married couple on a ski vacation with their adolescent sons (Julian Grey and Ammon Jacob Ford) in the Austrian Alps. The family is lunching on the patio of the resort’s restaurant when a controlled avalanche seems to get out of control, sending snow gushing over the tables and causing the diners to panic.

While Billie hunkers down with the boys and tries to protect them, Pete grabs his cellphone and runs away, leaving his family to fend for themselves.

When the powder clears, the family is physically unharmed, but the bonds between them, especially Pete and Billie’s relationship, have taken a big hit, especially as Billie becomes increasingly frustrated by her husband’s refusal to acknowledge the incident.

The tensions between the couple ratchet even tighter when Pete invites his younger co-worker Zach (Zach Woods), who is in the midst of a freewheeling trek across Europe with his even younger girlfriend Rosie (Zoe Chao), to dinner. It’s clear that Pete would prefer a grand adventure over family time on the slopes, which doesn’t help his standing with his disgruntled wife.

Most of the laughs in “Downhill” come from over-the-top cameos by “The Lord of the Rings'” Miranda Otto as a provocative, hard-partying hotelier and “Game of Thrones'” Kristofer Hivju, who co-starred in “Force Majeure,” as an impatient resort safety officer.

But the English-language script by co-directors Nat Faxon and Jim Rash, who won an Oscar for penning the 2011 family drama “The Descendants,” and Jesse Armstrong, an Oscar nominee for co-writing the 2009 satire “In the Loop,” doesn’t develop these or any of the supporting roles. Given that “Downhill” runs less than 90 minutes and still feels dull and slight, it would have perhaps fared better trimmed down and presented as a short film.

Although “Downhill” has a few relatable and amusing moments, it mostly wastes the considerable talents involved. Perhaps the best that can be said for the film is that it might convince more people to rent or stream “Force Majeure” – and given the success of the Korean film “Parasite” at the Oscars, perhaps more American audiences are ready to do just that.