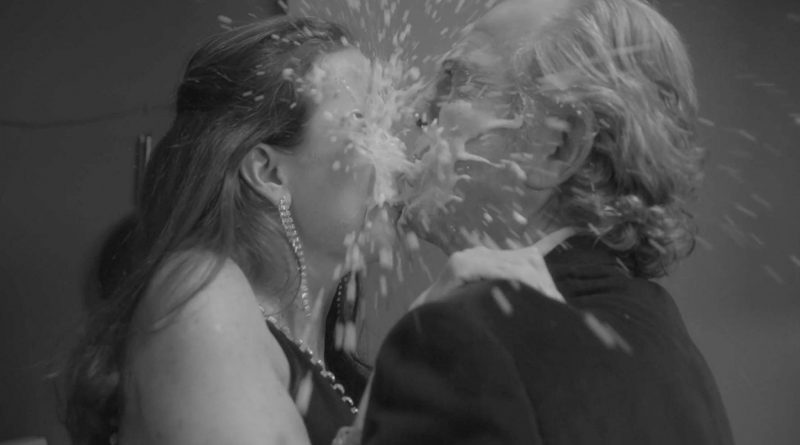 Love is Not Love doesn’t answer the question of what love is, actually. But this playful, impressionistic meditation on romance with its riffs on pop culture offers lots of images and ideas about one man’s quest to figure it out. He’s Frank, played by the film’s director, Stephen Keep Mills. When we first see him, he’s wandering alone around bustling Manhattan, eavesdropping on random conversations among strangers about love and all the anxiety it brings.

The black and white locations of New York City, shot by cinematographer Steven Fadellin, were projected against the actors in a studio, according to Mills’ notes for the film, although one wouldn’t suspect use of this technique. The city’s diverse commentators include masked street performers and a pair of garrulous Irish construction workers (Russell Simpson and Cameron Tagge) in hard hats who banter about the myth of Tristan and Isolde like a Greek chorus.

This unconventional, sprawling fantasia occasionally echoes Fellini, Becket, even Woody Allen. Frank ends up at the apartment of an escort, Reyna (Alejandra Gollasin), and becomes smitten. Frank confesses he’s 66 but “getting younger” since he met Reyna. “I feel like I’ve been sent an angel,” he gushes as they lie fully clothed on her fur draped bed.

Their reverie is countered by the bickering couple who shows up in the hallway. Are they a haunting memory of what love will later shrivel into? Soon Frank’s fantasy is over and, courtesy of a silent movie sequence, he’s dumped back in domestic hell with his longtime wife, Paula (Louise Martin) Later, horror movie images surface as Paula berates him with a list of his failures (“I don’t look at you and think I really want that guy to get me naked!”) as if in a courtroom with the same arguing couple seated at the kitchen table as judge and jury. In another hallucination, Frank and Paula are the stars of a sitcom called “Why I Love Paula” complete with laugh track and snarky jokes about Victoria’s Secret lingerie.

By the end of the film, Frank is back to wandering in Manhattan, still searching. Love is Not Love doesn’t provide answers, which seems to be just the way Mills wants it.