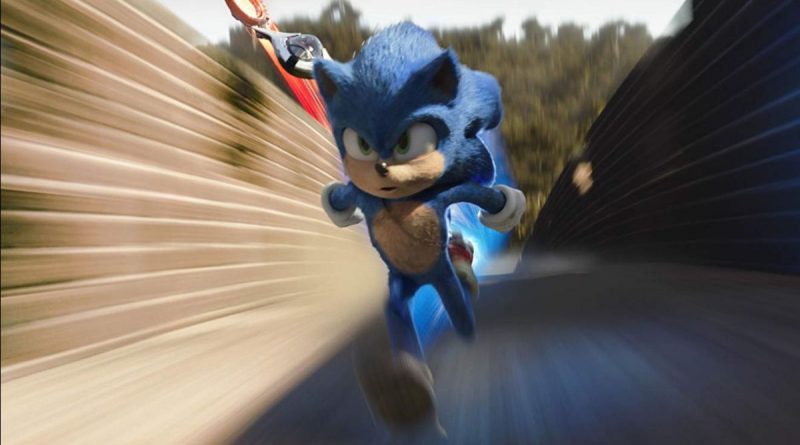 Blue-furred, spiky-haired Sonic (voiced by Ben Schwartz) comes from a far-away planet, where his phenomenal ability to run fast got him into trouble. A wise old owl (an “Obi-Wan who eats mice”) gives him a bag of magic teleport rings that open gateways to alien worlds but cautions him to keep a low profile and not attract unwanted attention.

So Sonic winds up near the tiny town of Green Hills, Montana, where he pretends to be part of the Wachowski household, although they don’t know he exists. To him, Sheriff Tom (James Marsden) and his wife Maddie (Tika Sumpter) are Donut Lord and Pretzel Lady.

But Sonic is lonely, very lonely. So lonely that he plays baseball by himself, racking up such speed that he creates a mysterious crackle of blue energy which knocks out power throughout the Pacific Northwest.

Panicked about the cause of the blackout, the Pentagon dispatches villainous Dr. Ivo Robotnik (Jim Carrey) to trap the “blue devil” whose motto is “Gotta go fast.”

Robotnik tells his henchman, Agent Stone (Lee Majdoub), that he was trained by “Native American Shadow Wolves,” referring to the real-life trackers who work for U.S. Immigration and Customs Enforcement (ICE).

Scripted by Pat Casey and Josh Miller, it’s directed by Jeff Fowler, who persisted after the outraged negative reaction to the original visual design of Sonic’s character, particularly his teeth.

Historically, movies based on video games – “Super Mario Bros,” “Mortal Kombat,” “Resident Evil,” even “Tomb Raider” – have not done as well as anticipated. But Sonic’s box-office bonanza may launch a new era of game adaptations.

On the Granger Movie Gauge of 1 to 10, “Sonic the Hedgehog” is a speed-demon 6, a blue blur, marking the 60th anniversary of Sega.