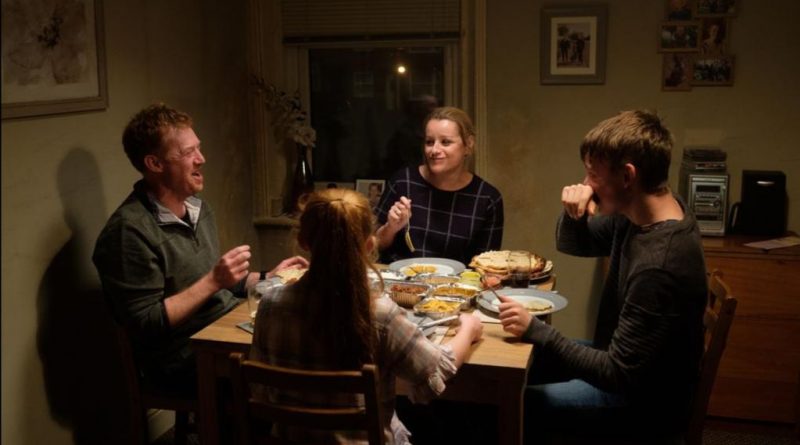 What sacrifices would you make for the chance, however slim, of financial stability? The slippery slope of what you would give up for the fantasy of wealth is the focus of Ken Loach’s Sorry We Missed You, a film that puts an extremely humanist spin on the classist struggle depicted in films like this year’s Best Picture Oscar winner Parasite. Loach’s film, set in Newcastle, England, follows a family working endlessly to pay down debt accrued after the 2008 financial crash. The characters are thoughtfully developed and the performances finely tuned, even if the movie dips slightly too often into melodrama.

Sorry We Missed You follows Ricky (Kris Hitchen), a husband and father who has been unable to maintain consistent work for years; his wife Abby (Debbie Honeywood), who works as a home-care nurse for the elderly and disabled; and their two kids, the rebellious Seb (Rhys Stone), whose membership in a graffiti gang has increasingly taken him away from school, and the younger Liza (Katie Proctor), who is understandably upset about how little she sees the members of her family. Every day is a juggling act: for Ricky and Abby, who work long hours; for Seb, who ducks the police and other various officials; and for Liza, who is asked by her parents to be responsible not only for her own school attendance, but for Seb’s, too. Things are hectic, and they only get more so when Ricky starts a new job: delivery truck driver.

At first, the job seems like a good opportunity, and is sold by the company representative Maloney (Ross Brewster) quite positively. “You don’t work for us, you work with us,” he tells Ricky, and he praises Ricky for never having been on the dole, and he promises him that he’ll make enough money in two years to afford homeownership. “I never see you. We never see each other,” Abby worries, but Ricky is dazzled by the numbers, by the possibility of making 1,200 pounds a week, by the ability to one day own a home—no longer renting, as they do now.

But slowly and steadily, the costs for the family begin to pile up. Ricky needs to buy his own delivery van, which means selling Abby’s car, which causes her to leave the house even earlier and arrive home even later because she now has to take the bus everywhere. And because her transport time isn’t covered by her clients, she’s spending money to make money, and wasting hours each day traveling place to place. With Ricky and Abby never around, it’s easier for Seb to cut class, and then eventually full days of school—missing so much time that the school notices. And Liza, who eats practically every meal alone, who only sees her parents in the middle of the night when they arrive home, who can’t seem to connect with Seb anymore, is beginning to feel lost. How can the family stay together when they can barely stay afloat?

Paul Laverty’s script drops us into this story with Ricky, who we first see performing his worthiness as a laborer, talking to Maloney about his pride and his strong work ethic, and then demonstrates to us the predatory nature of this particular industry. The drivers are held to unbelievably high standards, unable to take bathroom breaks during their routes or switch shifts or have any time for themselves. If they park somewhere they shouldn’t, they have to pay the ticket. If the wrong address has been given to them, they’re docked for not making the delivery. As Sorry We Missed You progresses, it’s plainly clear how impossible it will be for Ricky to ever save enough money to change his family’s circumstances, and although the movie sometimes raises stakes too quickly to prove its point—like a physical fight between another driver and Maloney—Laverty’s script is unyielding in its criticism of this field.

The film’s finest performance, though, belongs to Honeywood, who plays Abby as a woman torn between her family’s happiness, the safety of her clients—so often ignored or forgotten by their own families—and her own personal fulfillment. She’s a “carer,” she says, and Loach spends time with Abby so we understand what that means: how she knows her clients, how she treats them with a mixture of tenderness and firmness, and how she sacrifices so much of herself for others. When she finally voices her own frustrations and fears toward the end of Sorry We Missed You is when we sense, as an audience, how dire the family’s circumstances have become. While the movie also gives screen time to the increasingly fraught relationship between Ricky and Seb, it’s Abby’s role as the family peacemaker, and how much it wears on her over time, that you’ll remember most.

“We don’t steal in this family,” Ricky says, but how has this strict moral code actually benefited their family? If the system won’t provide for you, at what point should you provide for yourself? Sorry We Missed You explores the toll placed by a capitalist society upon people trying to do the right thing and suffering because of it, and the ensemble’s thoughtful performances drive home the increasing displacement of our global working class.