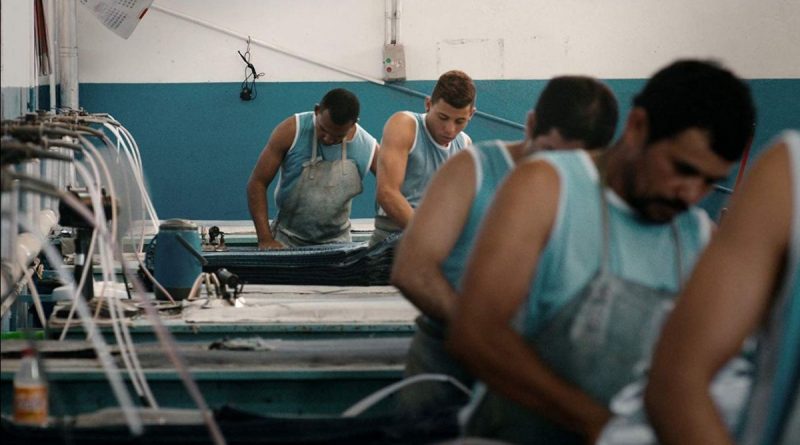 Waiting for the Carnival captures small-town capitalism in Brazil

Director Marcelo Gomes’ documentary Waiting for the Carnival captures small-town capitalism in the rural northeastern Brazilian town of Toritama, known as the country’s jeans capital. It doesn’t take long to be convinced of this claim as motorbikes drive by piled with mounds of blue jeans. Equal stacks lie outside doorways and clutter the floors of small shops, called factions.

Everyone is friendly as they work in various jobs: cutting material with scissors, sewing, stitching, folding, twisting, ironing, and what they call distressing them, that is, roughing the fabric and cutting holes in the legs. Workers describe their days, arriving at five or six a.m. and working until nine or ten at night with breaks only for meals. What looks and sounds like sweat shop abuse, to a person they call blue Toritama gold, proud that they can set their own hours, knowing that the more they work, the more money they make, the output taken to busy Sunday markets.

One man does talk about the shortcomings of capitalism, asserting, if there were no money, there’d be no evil. Another villager, a goatherder, champions traditional ways with which director Gomes is familiar. He has returned to Toritama chasing his memories of visits there with his father, a tax collector, forty years ago. The town has transformed in the interim. And why do these residents toil so industriously? For eight days each year at the beach for carnival, hence the film’s title, Waiting for the Carnival, when Toritama becomes a ghost town.

The nonjudgmental, candid snapshots of these hardy workers reveals volumes, including their dreams. They seem undaunted, aware, perhaps, that in the Tupi language, Toritama translates as Land of Happiness. They deserve that and much more as revealed by this sobering, astute documentary. In Portuguese with English subtitles.