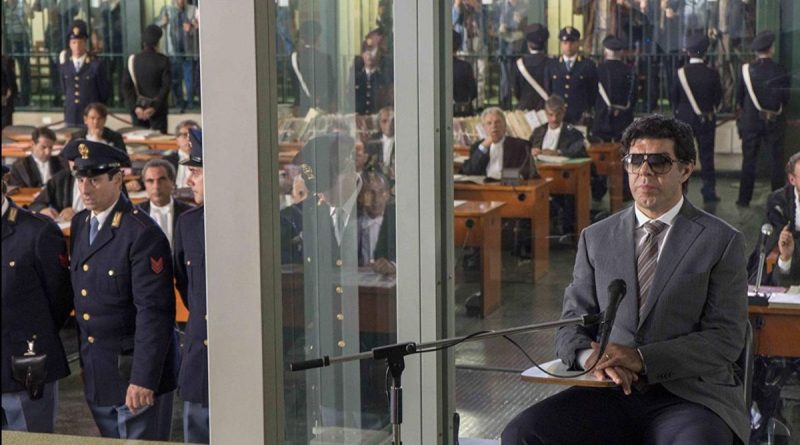 The Traitor presents the Sicilian Cosa Nostra in terrifying immediacy.

Italian director Marco Bellocchio’s film The Traitor takes a deep dive into the Sicilian Cosa Nostra, spanning three continents and two decades. Based on real events, the traitor of the title is Tommaso Buscetta, a reluctant informant who becomes alienated from the criminal world of which he’s a part after September 1980 when heroin becomes the illegal product trafficked.

Called also Don Masimo, Buscetta has an insider’s knowledge of the actions and retaliations perpetrated by his associates, also including his own felonies. The complicated narrative follows Buscetta and family members to Rio and back to Italy, in U.S. witness protection, and back to Sicily. On screen titles announce places, victims, trial dates, and decisions, with several interspersed flashbacks and dream sequences. The cumulative effect is an epic overview of the violence and the boisterous, seven-year trial in Palermo, Sicily, 1986-1992.

While they are differentiated by verbal and nonverbal characteristics, it occasionally becomes difficult to keep track of the numerous individuals. It’s best to relax into the forward momentum. In fact, Bellocchio, who co-wrote the film with three other authors, finds an imaginative way to present familiar “gangster genre” conventions. For example, murders early in the film are tallied on screen with numbers superimposed as they add up. A pronounced sense of dread accompanies each sequence, though the horrific brutality is not overstated. Similarly, the story elides unnecessary scenes when the trajectory is clear, while highlighting tense, extraordinary exchanges between Buscetta and Judge Giovanni Falcone (to whom the film is dedicated) and one gut-wrenching car explosion scene.

The performances and music are superb. Metaphors and compositions often comment implicitly on behavior—a tiger in a cage, a jackal turning in his enclosure, men’s faces half in light and half in darkness, and claustrophobic framing. Running two and a half hours, The Traitor, in truth, it could have more appropriately been a multi-episode series, though the impact of this condensed presentation is staggering.

The Traitor has won numerous awards, competed for the Cannes Festival Palme d’Or, and was Italy’s nominee for the Best International Film Oscar. In Italian and Sicilian with some Portuguese, all with English subtitles.