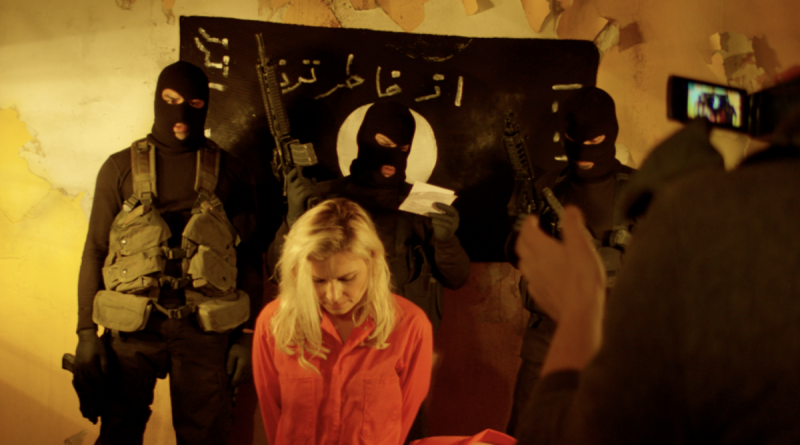 As books such as Linnie Blake’s The Wounds of Nations and Adam Lowenstein’s Shocking Representation have so compellingly argued, a concrete line can be drawn between the real-life horrors of our world and those brought to life in the fictional confines of horror cinema. In Lowenstein’s words, horror is a forum that permits a “return of history through the gut”. From this perspective, cult war-horror hybrids such as Buddy Giovinazzo’s Combat Shock and Adrian Lyne’s Jacob’s Ladder offer near text book cases of how large-scale global traumas can be translated through the language of horror into unforgettable, gut-wrenching exercises in the representation of subjective emotional and psychological collapse.

Kevin Shulman’s I Am Fear is another curious film to consider through this prism of national trauma and the horror film. Through its unapologetic visceral thrills, it too invites us to experience very recent history “through the gut” in precisely the terms Lowenstein describes. In what is effectively a supernatural horror film combined with the more traditional political thriller subgenre of the terrorism movie, I Am Fear seeks to use genre as a tool to answer a very simple question, but one almost overwhelming in its scale: why is the world such a terrible place?

I Am Fear follows a plucky journalist called Sara Brown (Kristina Klebe) who seems to be unstoppable in the lengths she will go to bring difficult stories about terrorism and its connection to the Middle East to her television viewers in the United States. Brown becomes a household name when she is abducted by a barely functional sleeper cell in LA as the Southern Californian wildfires burn, her kidnappers announcing they will behead her live on the internet on July 4. But as the date moves closer, things are not what they first appear and questions of power – who wields it and why – are revealed to be far from what the audience may first assume.

The sophomore feature for filmmaker Kevin Shulman, I Am Fear has no lack of big names in its support cast to act as drawcards, including William Forsythe, Bill Moseley and Guinevere Turner. But it is of course Klebe herself that is quite rightly the real attraction here; a cult horror star since her unforgettable performance in Rob Zombie’s Halloween in 2007, Klebe has built an impressive career both in front and behind the camera, in both film and television. As a co-executive producer of I Am Fear, it’s clear what would have drawn her to the project: uncompromising and unpredictable, playing a character Sara for an actor of Klebe’s calibre already so well versed in horror surely would have been too strong a temptation to resist.

While Klebe is undeniably very much the star of the show, however, where she excels most in I Am Fear is in the numerous scenes she appears in alongside the film’s male protagonist Asad, played by Faran Tahir. A familiar face from Iron Man and Star Trek, the on-screen dynamic between Tahir and Klebe is electrifying, and it is without any doubt the scenes where they face off that anchor the film the most solidly.

The film has, to be fair, weaker aspects, and is far from perfect. Perhaps most challenging is how jumbled its ideological messaging is, its ambitious subversions sometimes lacking enough context for us to anchor our reading of the film’s own politics. In retrospect, the answer provided is more than clear by the film’s conclusion, and there is no room to doubt where it points the finger regarding the current explosion of hatred that dominates news headlines.

Ultimately the jury may be out on whether the film’s various experiments are successful or not; its rejection of a linear narrative, its incorporation of supernatural fantasy in the context of an otherwise raw, gritty world building exercise, and its ambiguous moral allegiances sometimes work, and sometimes do not. But more importantly for me at least, what is less up for debate is that I Am Fear is genuinely attempting to do something new, and to shake things up. By virtue of its determination to reject the status quo, questions of whether it ‘succeeds’ or ‘fails’ are less interesting in relation to the scale of its mission. I Am Fear may not be perfect, but it sure as hell gets points for trying to say something meaningful about the world at a time when so many others are pretending it’s business as usual.