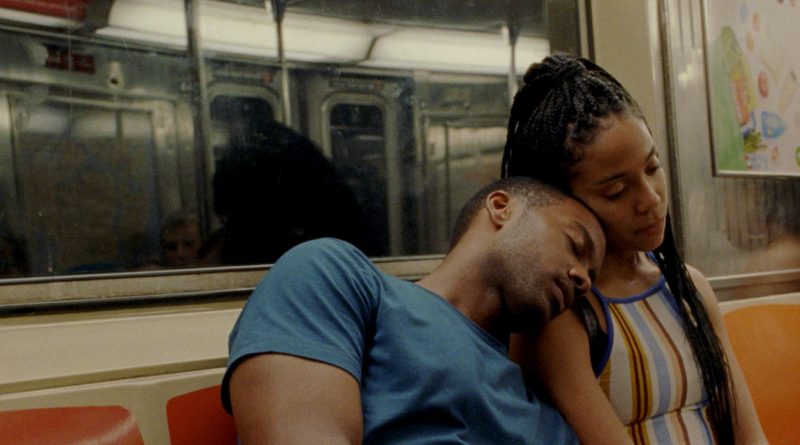 Sensitive and soulful, Rashaad Ernesto Green’s Premature is a poignant portrait of first love, from the thrill of the early days to the agony of conflict and parting. Set in Harlem, it centers on 17-year-old Ayanna (Zora Howard, who also co-wrote the script with Green), who falls for older music producer Isaiah (Joshua Boone) the summer before she’s planning to leave NYC for Bucknell University. 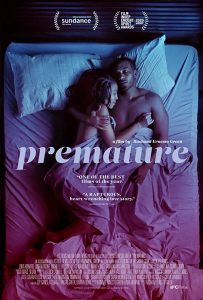 A relationship wasn’t part of Ayanna’s pre-college plan, but her feelings for Isaiah can’t be denied. He pursues her with respect and purpose, and the fact that he’s both new to the neighborhood and fairly well established — with work, his own place, and plenty of big dreams — makes him stand out among the guys she’s used to spending time with (and shooting down regularly). Their friends may be loud, posturing, and boisterous, but with each other, they can find quiet, intimacy, and permission to be their authentic selves.

In fact, so much of what makes Premature powerful is its authenticity. It feels almost documentary-like in the way it captures Ayanna’s interactions with her friends (bringing to mind Jim McKay’s excellent Our Song in that respect). It seems safe to assume that much of that frankness is thanks to Howard, who’s making her feature acting debut here but has already established herself as a talented writer. She was named New York City’s first youth poet laureate in 2009 and won the Urban Word NYC Grand Slam finals at the age of 13 (the youngest poet to do so).

Premature‘s honesty extends to the challenges that Ayanna and Isaiah face as they negotiate their powerful feelings for each other and their plans for the future. Certain scenes are wrenchingly painful, but their unflinching nature is what gives them so much impact. Green and Howard have done an impressive job of crafting a love story that’s both romantic and heartbreaking — just like love itself. — Betsy Bozdech

Sheila Roberts Premature distinguishes itself from other coming-of-age stories in the refreshingly raw, authentic way director Rashaad Ernesto Green examines common themes about young love and evokes compelling, emotionally complex performances from his young cast. Zora Howard brings grace, beauty, vulnerability and passion to a character who finds herself on the daunting precipice of adulthood and must find the courage to make the transition. Read full review.

Loren King Premature delivers a tender, raw, evocative coming of age story about young love and artistic aspirations that, because it centers on African-American characters, is too often missing from contemporary cinema. Read full review.

Marina Antunes A coming-of-age story that feels authentic and raw, Premature is a quietly simple story of a young woman finding her way in the world. Anchored by a wonderful performance from Zora Howard, who also co-wrote the screenplay, Rashaad Ernesto Green’s sophomore effort is worth seeking out.

Leslie Combemale What is most captivating in Premature is the way the characters interact in such an authentic way, in terms of how they work with each other’s beats, have connection, and speak to each other as if there is truly something at stake. This should be a career-making role for Zora Howard, and Rashaad Ernesto Green shows himself to be a writer/director that has a voice worth hearing and amplifying. The film is universal in its portrayal of first-time love and the betrayal that sometimes comes with it, but also is more specific in celebrating both Black love and the undeniable power of young women of color, and does so with depth and beauty.

MaryAnn Johanson Zora Howard is absolutely extraordinary in this coming-of-age love story, which she also cowrote. It’s rare to see stories about black teenagers that aren’t rife with trauma and violence, or one in which rage and resistance aren’t the primary emotions. Here, it’s all adolescent posturing and posing and pretended confidence in the face of the looming adult world, and the universal terror of personal decisions that will forge a path to the future. I do wish the film had a female director, too: there’s a male-gaziness here that undercuts the primacy of a young woman’s experience. But Howard’s voice — onscreen and in the shaping of the tale — comes through with grace and dignity.

Jennifer Merin Premature is a coming of age story set in Harlem, co-written by and starring Zora Howard as Ayanna, a teenage poet whose on her way to college and finds herself tuned into a relationship with music producer Isiah (Joshua Boone), a slightly older man who is as as soulful, sensitive and talented as she is. Director Rashaad Ernesto Green, who co-wrote the script with Howard, captures the raw authenticity of urban teen life, angst and ambition, eliciting superb performances from his young cast.

Pam Grady: A young woman’s last summer at home before college takes a turn when she falls for a newcomer to her New York neighborhood in this evocative, character-driven drama. Zora Howard, who co-wrote the screenplay with director Rashaad Ernesto Green, is 17-year-old Ayanna, still very much a teenager when she’s out with her girlfriends, but a serious, introspective aspiring writer when alone. Isaiah (Joshua Boone), a few years older and a composer and music producer, matches her for ambition and the chemistry between them is undeniable. Green captures the nature of new romance, its eroticism but also its pressures, revealing the shaky ground beneath the pull of passion. The cinematography and sound design capture the essence of the heat of a New York summer, not so different from the heat of Ayanna and Isaiah’s relationship and just as ephemeral. Boone is very good as the object of Ayanna’s affections, but Howard is the standout as she embodies every change and conflict in Ayanna’s emotions.

Cate Marquis Director Rashaad Ernesto Green offers a different kind of coming-of-age story, about a college-bound 17-year-old girl from Harlem, Ayanna (Zora Howard) who has her view of love and life altered by meeting slightly-older Isiah (Joshua Boone), a budding music producer and would-be composer. Unlike her girlfriends, Ayanna is cool to the idea of relationships, having a low opinion of the players she sees in her neighborhood, but she has her view of romance changed by the courtly, sensitive, ambitious Isiah. Zora Howard both stars in the film and co-wrote the script with director Green, a tale that is romantic, dramatic and filled with an honest, authentic view of urban teen life. Premature is the best kind of indie film, filled with raw emotion, honest and human portraits of life, and strong acting from a young, talented cast.