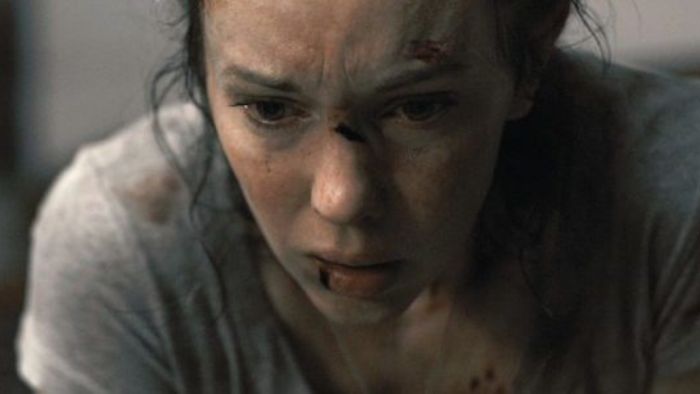 To call murder in film a ubiquitous plot device is a somewhat macabre understatement; it’s hard to even begin to comprehend the sheer enormity of stories based around the killing of one person by another. Genres like horror, thrillers, crime movies and mysteries are built around it, and it’s almost impossible to imagine what Netflix would look like without its now-signature glut of “serial killer of the week” documentaries. One on hand, death in cinema is everywhere, but at the same time it is this very ubiquity that renders it somehow par for the course. It’s nothing special.

Enter Matthew Pope and his feature debut Blood on Her Name, a low-key neo-noir that consciously rejects the femme fatale trope in favour of looking in unflinching close up on the far too often glossed-over flip side to all this: the complex human experience of guilt. The film begins just after struggling single mother Leigh (Bethany Anne Lind) has killed a man in the small-town garage she is struggling to keep afloat after her husband has been sent to jail. Panicking, she decides to dispose of his body, but when her victim’s family begins to investigate his disappearance Leigh must find a way to balance her desire to protect her troubled teenage son and find a way to live with her own conscience.

As Leigh, Bethany Anne Lind very much carries the emotional heavy lifting of Blood on Her Name – without her subtlety and compassion for the role, much of the film could easily collapse into overwrought cliché. Much of the film therefore plays out not in her words, but rather through what it is that she represses, and we can see these manifest through even the smallest shifts in facial expression and the tiniest of seemingly subconscious physical gestures. While focusing on a killer’s guilt is certainly nothing new, the particular way that Lind and Pope collaborate in bringing this emotion and the satellite of interrelated other feelings to life is impressively refreshing. Something about this film at its very core seems to demand that we acknowledge the elephant in the room: yes, murder is a great plot device, but just imagine how bad it feels.

While far too complex a character to be reduced to anything as simplistic as “identification”, the magic of Leigh – as brought so memorably to life by Lind – is that there is something fundamentally understandable at the heart of the numerous bad decisions she makes. What on paper might come across as frustrating here is rendered poignantly moving as we are asked, subtly but consistently: what would you do? Superb performances and a taut, emotionally intelligent script take what in other hands could be pedestrian genre fare and turn Blood on Her Name into something both thoughtful and memorable.